The Touch of the Jubilee of Simplicity 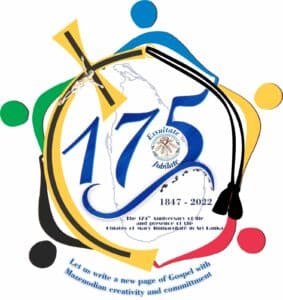 At times, more than mega events, simple and modest events can draw the interest of the general public. They touch their hearts and become an unforgettable memory of the past, while the highly organised events might simply remain in historical records.

When it was decided by the OMI Provincial Administrations of Colombo and Jaffna to withdraw from going ahead with the widely planned 175th jubilee activities of the Oblate presence in Sri Lanka at Our Lady of Lanka Basilica in Tewatte, things had gone too far beyond the point of no return according to some of us. The Jubilee Committees of both OMI Provinces have worked hard in collaboration to make the occasion of the Jubilee celebration, fixed for 01st December 2022, glamorous.

When a few Oblates directly expressed their counter views to having a grandeur event, it was also not difficult to read the sensitivity and the mind of the silent majority. Being with the ordinary people, they too have felt the ongoing adverse effects of the economic bankruptcy of the country, of the political and social instability resulting from the rising level of corruption, and of the loss of law and order threatening civilized living. The context, therefore, was not at all conducive to go ahead with the proposed jubilee celebration, though substantial amounts of resources and energy had already been spent for preliminaries. Lying beneath such a huge celebration, as rightly understood by the OMI Provincial administrations, were a counter witness to being with the poor and powerless, a betrayal of religious integrity, and a victimization of those who honour the contribution of the Oblates to the local church and the country.

Replacing that envisaged big occasion, a simple celebration was held on December 01st at De Mazenod Provincial House, Colombo, which went on very well in achieving all the esteemed objectives set for that previously planned event. The number of Oblates, belonging to both Oblate Provinces, who turned up for their active participation in the simple ceremony was over one hundred. It was an amazing unity to see at these troubled times of the country. The collectively expressed Oblate family spirit was witnessed by all those present at the occasion. There was joy with the determined focus to get inspired and renewed by the glories of the past. There was the mutual sharing of the newly-emerged, ongoing challenges of Oblate ministries to seek guidance and moral support of one another. There was the realization of the new poor in the powerlessness of the silent majority who starve, who have lost their jobs, and whose children are denied of decent education and upbringing. Evangelizing the poor with haste was seen as a sacred and mandatory duty. There was also the public pledge to continue the powerful Oblate tradition of dwelling in the maternal care of the Blessed Mother, Mary.

The features of pomp and glory were absent at the celebration of the Eucharist, which was presided at by our own brother Oblate, Most Rev. Dr. Norbert M. Andradi, OMI, the Bishop of the Diocese of Anuradhapura. His immediate concelebrants at the altar were Fr. Henricus Asodo, OMI, the 2nd Assistant General, who unexpectedly joined with us in the midst of his busy schedule, the Provincial Superior of Colombo Fr. Roshan Silva, OMI, the former Provincial Superior of Jaffna and the newly elected counselor for Asia-Oceania Fr. Eugene Benedict OMI, and Fr. Pius Pohdueng, OMI, from the OMI Delegation of Bangladesh. At the end of the celebration, the closure of the 175th Jubilee Year was announced, and it detailed clearly the work which had been accomplished during the Jubilee Year in spite of the unforeseen obstacles which emerged from the situations of covid-19 and economic and political upheavals.

The simple meal shared at lunch, foregoing of the festivity, as a mark of Oblate missionary consciousness or an attempt to integrate ‘Oblate Heart’ with the poor was much appreciated. Some of us even went on to say that what we demonstrated on that day was full of prophetic and witnessing value. At the end of the day, one may say, ‘Our stance of simplicity has brought us everything we need. What more do we need from an extravagant Jubilee celebration?’

25 years of the Oblate presence in Cuba.
Message of the 37th General Chapter