A lay apostle among the Snohomish

Devotion to the Blessed Virgin is a noted characteristic of the Oblates of Mary Immaculate. From the beginning of this congregation, hardly two years after its foundation at Aix, Father Eugene de Mazenod, in response to a request from the bishop of Dignes, accepted to serve the sanctuary of Notre Dame du Laus. With the passage of time, tens of other pilgrimage locations in honor of the Blessed Virgin were accepted, restored, and livened by the Oblates. The Apostolat of January 1988 recalled the story of twenty of these shrines still being served by the sons of Blessed de Mazenod.

For their part, missionaries in their correspondence faithfully included edifying references that lead to knowing and loving our heavenly Mother. Father Casimir-Eugène Chirouse, missionary in Oregon and British Columbia from 1847 to 1892, tells this touching story that took place in the Snohomish tribe, at Tulalip, in Oregon.

Pierre repudiates his baptism
After several weeks of catechetical instruction, Father Chirouse had won to the Catholic faith a good ten of these forest dwellers. In the midst of a grand celebration he poured the waters of baptism on the foreheads of his fervent catechumens. A salvo of gunshots, the singing of hymns, and an excellent meal, sprinkled with the fire-water that was indispensible to these dear Amerindians, added to the splendor of the ceremony. Everyone was beaming with joy. A tall fellow, baptized with the name of Pierre, seemed to be the leader of the group. During more than three months, he had no fear of publicly showing his religious convictions. But as soon as the Oblate left the mission, poor human nature once more claimed its rights. Pierre returned to his old habits of alcoholism and polygamy. He became a scandal to the whole tribe. This went on for seven years until at last he was hard hit by a mortal disease.

His friend Leon intervenes
It was with great sorrow that his friend Leon observed the renegade’s fall from grace. Leon tried by various means to help him. He even consented to lend him a significant sum of money. He visited him one day, more worried about Pierre’s salvation than about recuperating the loan. Sitting on the edge of the pallet, he took his friend’s hand and said: “Pierre my friend, you know that you will die soon. It’s a matter of days. Have pity for your soul, I beg you. Don’t give it to the devil! If you miss heaven, think of the torments you are condemning yourself to… Last Spring, you wanted to assassinate me! I will forgive you from my heart, if you come back to God. And so that you can concentrate more intently on your soul, I’m returning all the money that you owe me. But I beseech you, don’t die without going to confession.”

Grace’s turn to take action
This exchange went on for over an hour. At last, the dying man, touched by repentance, asked his friend to send for the priest. Without losing a moment, Leon hurried to the church. “Father Chirouse come quickly! Pierre is about to die and he wants to see you. He is crying.” The Oblate tells us: “I spoke a few words of encouragement, and asked if he still remembered the prayers he had learned prior to his Baptism. He answered: ‘I forgot them all except one that I recited every day, even when I was drunk. It is the Hail Mary.’ 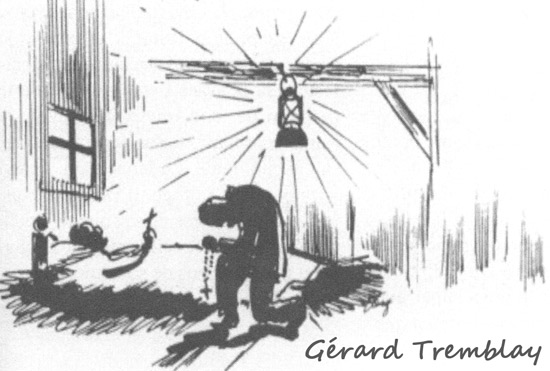 “As he pronounced the name of Mary, two great tears flowed from his eyes. He struck his chest, and covered his face with emaciated hands. Evidently, grace had touched him. I did my best to prepare him for receiving Holy Communion. There could be no doubt about his repentance. On the following day, when I returned to his hut, he had just died. Leon was kneeling next to his pallet in deep recollection, praying the rosary for the repose of his soul.”

The hanged woman unhanged
The Great Provider of the missions