A rooster that was hard to digest 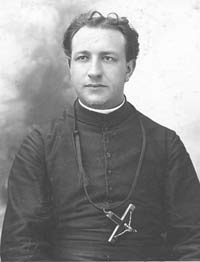 Of the hundreds of devoted Oblates who served as pastors or assistants in the parishes of Quebec, several would merit to see their names inscribed on the first page of a glorious honor roll. For instance, Fathers François Perdereau , Honorius Chabot, Gédéas Bertrand, Isidore Leclerc, Simon Chênevert, Raoul Bergeron and how many others! Father Arthur Guertin is one of them. He left unforgettable memories among the parishioners of Hull and throughout the entire region of Ottawa.

Preacher-pastor (1892-1916)
Born at Saint-Jean-Baptiste-de-Rouville in 1868, Arthur Guertin entered the Oblate Novitiate at the age of 17, following the example of his brother Frederic. Ordained to the priesthood in 1892, he first made a name for himself as a preacher of parish missions during eighteen years. His warm, vivacious and powerful words struck the imagination of people, and reached the hardened hearts. Nevertheless, his preference was for the young. He had a considerable influence on college students. Many are the priests and religious who owe their vocation to him! Cardinal J.M.R. Villeneuve, O.M.I. and Bishop Joseph Guy, O.M.I. are of that number.

In 1910, Father Guertin we named pastor of the great and beautiful parish of Notre Dame, in Hull. During six years he dedicated his talents to the spiritual and material welfare of this mostly working-class parish. People came from all over town to hear his overwhelming sermons and unexpected flashes of wit. He promoted devotion to the Sacred Heart and introduced frequent communion. He started a parish bulletin, organized a credit union, raised scholarships for students who were poor, and instigated catholic labor unions.

Professor at the University of Ottawa (1916-1932)
In the last sixteen years of his life he taught Canadian History and Literature at the University of Ottawa. His good nature and open cordiality made him popular in this environment. He knew how to keep everyone’s attention by his clear explanations and lively repartees that provoked laughter from the students. One day he challenged a tall and lanky student who seemed bored in the back of the classroom: “Hey, back there, you look like a migrant who has lost his suit-case… Why do you sit there like a stave on a quarter keg?” Father Guertin was everybody’s friend. No one hesitated to knock at his door for a consultation or confession. A few students may have taken advantage of his confidence in them. This is shown by the following anecdote.

A copious meal for a special guest!
For the past few years, Father Guertin had kept a dozen or so chickens and a majestic rooster in a shed, on Wilbrod Street, near the University. Every day, this proud chanticleer intoned his morning cock-a-doo-del-doo which, unfortunately, disturbed the sleep of the students. Three clever young rascals, at their wit’s end, decided one day to abduct the wearisome awakener. This also provided the right moment for a succulent meal. They were even brazen enough to extend a friendly invitation to the owner of the winged creature for a famous “coq au vin”! The Oblate accepted, and in the company of the three rogues, confidently sank his teeth into the fruit of their abduction.

In the following days, however, suspicions began to rise in the priest’s mind, as he realized that his big beautiful rooster had disappeared. He then called the three suspected hosts to his office… Mum’s the word! Mouths closed! None of them, of course, had heard anything about this larceny!

Thus the mystery remained, for many long years. It was only on his deathbed that Father Guertin brought it to light. One of the three thieves came to visit him at the hospital. After the usual greetings and a few reflections on the end of life, the priest stopped suddenly, and staring fixedly in his visitor’s eyes, he asked point-blank: “Today, my dear boy, you can very well tell me… was it you and the others who took my rooster?” The culprit could not hold back his tears. He bent his head without saying a word. Father Guertin had understood.