Fr. Jean-Marie Lejacq… nose to nose with a bear! 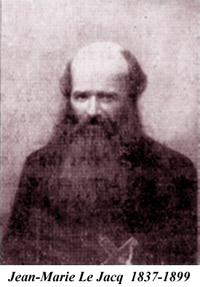 Of all the Oblate missionaries who brought the Good News to the Amerindians of British Colombia none seem to have made such a deep impression on them and commanded so much respect as Father Jean-Marie Lejacq. Even today, after two or three generations, the descendants of the Porter, the Babine or the Sekani tribes remain firmly convinced that this man was a real saint.

He was born in the Finistère region of Britanny in 1837. He entered the Oblates at Notre-Dame de l’Osier in 1860 and was ordained a priest in Marseille in 1862. He was sent to Canada the following year. For more than thirty years he traveled all over British Colombia. Besides French and English, he spoke five or six Amerindian dialects. His zeal knew no limits. On his visits to the Amerindians he traveled kilometer after kilometer carrying on his back blankets, a portable altar, food and many other things. He was given the title of “Prince of the Amerindian missionaries.”

Fr. Lejacq is for the Amerindians of British Colombia what Saint Patrick is for the Irish of Ireland. He baptized hundreds and the faith he communicated to them remains deeply rooted. “They were vaccinated Catholics,” a protestant minister once said of Fr. Lejacq’s Amerindians. If you ask the Amerindians of Kamloops or Lake Stuart: “Who was your best missionary? Who did the most for you?” They will answer without hesitation: “Fr. Lejacq.”

The stories told about him are almost legends. The anecdote that comes back most often is the one about the bear who accompanied him on the trail. Here it is. One day, the good Father and four Amerindians set out on a 240 kilometer journey that would take them to Lake Ootsa.

The Amerindians led the way while Fr. Lejacq lagged behind taken up with reading his breviary. All of a sudden, the lead man saw a big grizzly bear coming right for them. The four Sekanis packed off while the black robe continued on unaware of the danger. The bear kept coming. When the two were just a few feet from one another the priest calmly raised his eyes from his breviary and presented it to the animal’s nose as if he were inviting it to smell it. The plantigrade sniffed noisily, turned its back on the missionary and began walking in front of him as if to lead the way. It did not leave him until they approached some dwellings. All this time, the Amerindians curiously watched the scene, following prudently at a distance. When they arrived at the camp, they excitedly told of the unbelievable adventure of Fr. Lejacq and his bear, embellishing the tale with many details.

Another time, some people came on a cold night to fetch the missionary to baptize a woman at Soda Creek. The poor woman could not receive baptism before because she was living in concubinage with a White. The priest left by horse in 30 below zero cold. Half way there he stopped in a camp to warm himself a bit. His legs were stiff and covered already with chilblains. The Amerindians tried everything to keep him with them for the night. No way! The priest was determined to get to the poor sick woman that very night. When he arrived, some men came to meet him saying: “It’s too late, she is dead.” The priest, in fact, found the woman unconscious in what looked like death. “Agatha, amota!” “Agatha, get up!” he shouted. The old Amerindian opened her eyes and sat up in her bed. The Oblate baptized her and began some prayers. Suddenly Agatha fell backward: she was dead.

The dedication of the good priest won everyone’s heart. His smile was his usual greeting, so much so that the Amerindians would say: “Even before Fr. Lejacq said hello, he would show us all of his teeth.”

Admitted to hospital in New Westminster with stomach cancer, the humble and valiant Oblate missionary died January 23, 1899. He was mourned as much by the Amerindians as by the Whites of the whole province.

The Blessed Virgin kept her promise
He was only a child… but what a child!