He was only a child… but what a child!

In 1844, Bishop J.-Norbert Provencher, a pioneer of the apostolate in the Canadian Northwest, had just been named Vicar Apostolic of all the territory west of Saint-Boniface to the Pacific Ocean: a field of evangelization ten times larger than France. He could count only on five diocesan priests for help. So, he thought of calling upon some religious. Meanwhile, the Oblates of Mary Immaculate had just established themselves in Montreal. Bishop Provencher already knew them through their Founder whom he had met in Paris in 1836. He sent several urgent appeals to Bishop de Mazenod, who believed there was an expression of the will of God in these repeated messages. He accepted the request in spite of the small number of subjects that his young Congregation had at the time. He appointed Fr. Pierre Aubert to found this remote mission. At the same time he ordered Fr. Bruno Guigues, superior of the Oblates in Canada, to give him a companion of his choice. The one chosen was a young twenty-two year old novice, who had been ordained a sub-deacon a few months earlier. His name was Alexandre Taché. 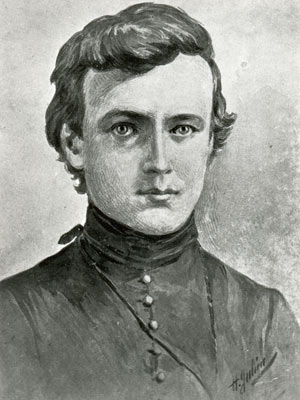 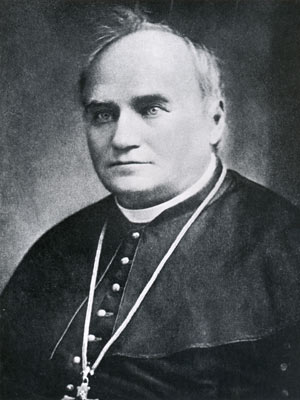 André DORVAL, OMIBorn at Rivière-du-Loup on July 23, he had studied at the Saint-Hyacinthe minor seminary and at the major seminary in Montreal. Upon completing his theology, he had entered the Oblate novitiate at Longueuil on October 5, 1844. The following June 25, the two missionaries, accompanied by two Gray Nuns of Montreal, left Lachine in a canoe manned by six men. They were setting out on a voyage of approximately 1,800 miles (2,900 km) over lakes and rivers. Two months later, on August 24, Fr. Aubert could finally offer the Holy Sacrifice of the Mass on the shores of the Red River. The following day the travelers arrived at their destination. Bishop Provencher went down to the shore to receive the long-awaited apostles. He was a bit disappointed. He had expected a small band of missionaries ready to work and here was only one priest and a sub-deacon! Looking at the young Brother Taché, he could not help exclaiming: “I asked for men and here they send me a child!” However it was this child that Providence intended as his successor. On October 12 of that year Bro. Taché was ordained a priest. The following day he celebrated his first Mass and the same day he pronounced his vows of religion before Fr. Aubert.

Four years later, Bishop Provencher, who had become ill and unable to undertake long trips, asked Rome for a coadjutor. As for Fr. Taché, he had gone a long way. He had laid the foundations of a mission at Île-à-la-Crosse and another on the shores of Lake Athabaska, some 1,430 km northwest of Saint-Boniface. On June 14, 1850 the Holy See, in response to the request of Bishop Provencher, named Fr. Taché coadjutor bishop with right of succession. All this took place without the knowledge of the newly elected, who only learned of his nomination in the next winter’s mail. He left Île-à-la-Crosse for Saint-Boniface immediately, where he found a letter from Bishop de Mazenod directing him in the name of holy obedience, to come to him in Marseilles. The Founder wanted at all costs to have the joy of consecrating himself the first missionary bishop from his religious family.

So, Fr. Taché left for Marseilles with the fixed idea of presenting his superior with objections capable, he thought, of making him change his mind. His meeting with the Founder remains famous in annals of the Congregation. Here is the account by Bishop Taché himself in Vingt ans de Missions (Twenty years of Missions). “You will be a bishop”, Bishop de Mazenod told him. “But, My Lord, my age, my defects, and so on….” “The Sovereign pontiff appointed you and when the Pope speaks it is God who speaks.” “My Lord, I want to remain an Oblate.” “Certainly, that is how I see it.” “But the episcopal dignity seems to me incompatible with religious life.” “What, the fullness of the priesthood would exclude the perfection to which all religious must aspire!” Then, straightening up with the noble pride that characterized him, he added: “Nobody is more a bishop than me and, of course, nobody is any more an Oblate either. Don’t I know the spirit that I wanted to inspire in my Congregation? You will be a bishop…. I want you obey the Pope and I also want to obey him.”

Alexandre Taché, the former child, was ordained bishop in the cathedral of Viviers on November 26, 1851. He was only twenty-eight years and five months old.

Fr. Jean-Marie Lejacq… nose to nose with a bear!
It was either his belly… or prison!