His name saved his life 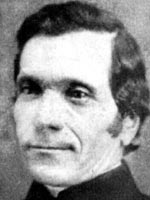 Eugene Casimir Chirouse was among the five first Oblates to arrive in Oregon in 1847. The following year, he became the first priest to be ordained in the American State of Washington. After about ten years in Oregon, he was sent to the island of Victoria, in British Columbia. The valiant apostle was soon known and appreciated by the Amerindian tribes of that region. He was at once called “Good old Father.”

A dangerous expedition
In 1860 he was sent on an expedition alongside the island. He was asked go up the east coast by canoe, reaching as far north as possible, to evaluate the disposition of the local natives, and to seek out a favorable site for the eventual establishment of a mission. The tribes of that region were considered “barbarians” hostile to whites. Many thought that Oblates who would venture there would be massacred, just as the many “pale faces” who had been there before. In spite of these warnings, Father Chirouse decided to respond to the request of his superior. He chose Father Leon Fouquet to accompany him, and the two began the voyage toward Nanaimo.

One night, at about 9:00, during dreary weather, they approached a spot where the Penelakut tribe had encamped. Father Chirouse had heard, shortly before, that their chief had been seriously wounded by other Amerindians from the north. As they advanced, our two missionaries saw no signs of life, and heard nothing except the distant howling of a wolf.

A saving cry
Suddenly the dogs began to bark. At once the Indians, fearing another attack, seized their arms and come out from their ambush. With much presence of mind, Father Fouquet let out a cry, the only cry that could interrupt the Penelakut attack: “Chilouse”. That is how these Amerindians pronounced the name of Father Chirouse. They knew him well and loved him as a father. Another voice was heard coming from the Amerindian side: “Pi Fouquet”. This cry was uttered by Saanich, a youth who had been visiting Northern friends, and who recognized Father Fouquet’s voice. At once the natives threw down their arms. “They were so glad to see us” remembers Father, “that they didn’t wait until we disembarked. They ran into the water and towed our boats ashore. All were pleased with themselves for not having fired upon us. They surrounded us and dragged us into their tents”.

On the next day, the two missionaries, armed only with their Oblate crosses, pursued their expedition all the way to the extremity of the island.

“I don’t want to go there”
Motjeka, child of God