It was either his belly… or prison! 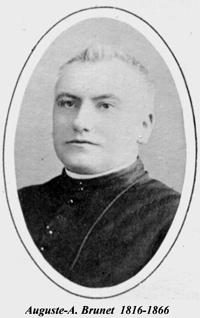 The Oblates of Mary Immaculate have always ministered to prisoners. Their Founder himself was a chaplain at the prison in Aix during the first years of his apostolic life. In this article I would like to tell you about the adventure of an Oblate who was himself a prisoner for four months, Fr. Auguste Brunet (1816-1866). How did that happen? It came about because of a charge brought before the court of Kankakee, near Chicago, by Charles Chiniquy, an apostate priest from Quebec.

Chiniquy was born on July 30, 1809 and ordained a priest in 1833. We find him in Beauport in 1838 and as pastor at Kamouraska in 1842. His preaching on temperance made him famous in eastern Canada. He entered the Oblate novitiate in November 1846 and remained there thirteen months, but was not accepted to religious profession. A little later, he appears as a priest among the settlers in Bourbonnais, Illinois, in the United States. It was there that he would unfortunately apostatize and take with him a group of Canadians who had immigrated to this area. Bishop O’Reagan, of Chicago, put Chiniquy under interdict and called upon the Oblates of Quebec to try to bring back to the right path the poor victims of his error.

This is where our Fr. Brunet enters the scene. He arrived at Bourbonnais in October 1858, accompanied by Fr. Lucien Lagier. The mission was a remarkable success. In spite of the infernal machinations of Chiniquy and his supporters, 150 heretics returned to the bosom of the Church and received the sacraments with all the Catholics of the place. The two missionaries, very happy with their work, were about to leave for Canada when an unhappy event shattered their joy.

The French language newspaper Le Canadien reported the facts thus: “Mr. Chiniquy, who lives off of scandals, had the audacity to have Fr. Brunet arrested on the trumped up charges that the priest had accused him of burning the church at Bourbonnais in 1853. This news excited the indignation of the Catholics against the poor wretch. Crowds came to the presbytery to contribute money to pay the bond necessary to set Brunet free.” The missionaries thus returned to Canada, anxious however about how events would turn.

The lawsuit opened at the court of Kankakee on January 3, 1860. The two main witnesses told of an alleged conversation in the confessional with the defendant. The defense tried in vain to object to such a deposition since it was about a confidential conversation. According to their testimony, Fr. Brunet had told them that it was bad to listen to Chiniquy…; he had also asked them whether they knew that Chiniquy had set fire to the church of Bourbonnais. At the end of this long lawsuit before jurors openly hostile to the Catholic religion, Brunet was declared guilty. He was ordered to pay Chiniquy a fine of $2,500, a considerable sum for the times.

All this took place however in the absence of the defendant who was in Canada. When he learned of the result of the lawsuit, in order to save his friends from losing their money and not having the means himself of paying such an amount, Fr. Brunet decided to become a prisoner. On May 13, 1861, after having assured himself that the bail money had been completely refunded, he presented himself at the Kankakee prison. This did not please Chiniquy, who now had to pay three dollars per week for the maintenance of the prisoner as well as the expenses of the lawsuit. Four months later, although the Oblate was rather well treated in prison, his Catholic friends decided on a way to get him out. A plan of escape was put together. An employee of the secret police had a bar of the prison sawn through during the night. Fr. Brunet was a rather stout man and that almost ruined their plans. The prisoner easily passed his head and even his chest between the bars remaining in the window but his paunch absolutely refused! “Pull, pull, he shouted to his liberators, even if you have to leave a piece of my carcass here!”

With great effort he finally returned to freedom. He quickly jumped on the horse that they had prepared for him. He went to the next town where he boarded a train that enabled him to return to Canada — without taking the time to go to greet his friend Chiniquy…!

He was only a child… but what a child!
Thirty-three years of paralysis could not stop him Nicolas Laverlochère, O.M.I. (1811-1884)