Learning from wharves and on the streets

We wish to recall the legendary figure of Father Henri Roy, OMI, who was involved in the Catholic Action movements. 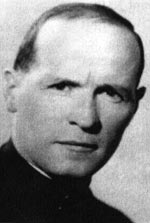 A Franco-American by birth, young fourteen-year-old Henri Roy was already working in the mills, early in the 20th Century. At the age of twenty-two he approached the seminary at Saint-Victor-de Beauce to prepare for the priesthood. It didn’t take too long: three years of secondary and classical courses, followed by six years of university study with the Oblates. In 1929 he was ordained and began his ministry.

His first assignment was teaching at the minor seminary of Chambly, but it became apparent that he needed larger sails. He started l’Apostolat, the missionary review, in 1929. He took the time to pursue his formation among the longshoremen on the wharves of Montreal and also with the poor in the lower quarters of the city. Inspired by Father Cardijn in Belgium, he founded Catholic Action movements in Canada in 1931. After ten years of sustained effort, his program gained wide acceptance and others joined in to consolidate it. We must now mention the names of Fathers Victor-Marie Villeneuve, Jean-Louis Dion, Pierre-Paul Asselin and Paul-Emile Pelletier. Father Roy’s task was to turn over new soil, then leaving the cultivation to others. He left for his land of birth, in Manchester New Hampshire, to set up this same Christian workers movement.

In the heat of the action, Father Roy found the time to lay the foundations for what was to become the secular Institute of Pius X, and after this, the movement called “La Rencontre” (the Encounter), weekends of Christian reflection, which spread to several dioceses.

Finally, a word must be said about Father Roy’s two initiatives for the Christian formation of his Catholic Action members: the spreading of the Word of God, and the marriage preparation courses. In 1930, few Catholics had ready access to the Bible, yet it had become an absolute requirement for his militant members of Catholic Action. Father Roy found a way to publish for them a 300 page pocket-size format of the Gospels. Within a few weeks, the 250,000 copies disappeared, selling for five cents each. The number spread to one million copies in a few years.

Later, with Father Albert Sanschagrin, he organized the marriage preparation course which still exists. In 1939, both priests set the scene for the 106 weddings that took place in the DeLorimier stadium, in Montreal, before 30,000 witnesses. And then, we must also mention his night shelters for the indigents of Montréal, Sherbrook and Trois-Rivières, as well as his Help for prisoners.

As a man of talent and vision, Father Henri Roy drew his privileged inspiration from the streets and from workers on the wharves He was able to recognize Christ in the little people and the poor. They made of him a man of many worthy accomplishments.

Chaplains for nuns
The Oblates at Montreal