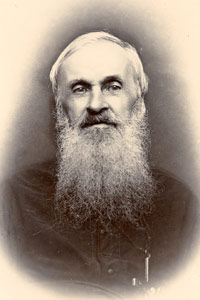 “How unsearchable are God’s judgments and how inscrutable his ways,” says St. Paul. But in the same letter to the Romans he affirms: “God cooperates with all those who love him by turning everything to their good.” If we have confidence in this God who loves us and wants only our happiness, we are sure to succeed wherever Providence sends us. The career of Father Constant Chounavel, O.M.I. is an example of this.

February 15, 1852, Bishop Eugene de Mazenod ordained him a priest in Marseilles on the same day as Father Henri Grollier. The Superior General of the Oblates then decided that Fr. Chounavel would go to the Arctic while his companion would head for Ceylon. Both prepared for their coming departure happy to be able to soon put into practice, each in their own place, the motto of the Oblates: “He has sent me to evangelize the poor.” But a simple accident suddenly changed their plans. The winter of 1852 was particularly rigorous in Marseilles. Fr. Chounavel had his nose and hands frozen. A doctor put a plaster on his nose, which gave him “a ridiculous appearance.” At the sight of it, Bishop de Mazenod exclaimed: “This child cannot stand the cold of Marseilles, how will he endure that of North America? My dear Constant, you will therefore go to Ceylon and Grollier will go to Mackenzie.”

The young missionaries gladly accepted this change of obediences, without suspecting that they would both accomplish, in their respective field of apostolate, things that would pass into history. Fr. Grollier was the first priest to cross the Arctic Circle. He died at the age of thirty-eight while saying before the cross that he had just planted at Good Hope: “I die content, Jesus, now that I have seen your standard at the ends of the earth.”

On the other side of the globe, under the burning sun of Ceylon (Sri Lanka), Fr. Chounavel lived to be 99 years old. He died after seventy-one years of very active ministry, also murmuring to himself: “Lord, I die content because with the assistance of Mary I made you known to thousands of poor Tamils and Singhalese.”

In 1853, one year after his arrival in the island, he was sent alone to the distant mission of Batticaloa. It was there that in answer to his prayers the Blessed Virgin “loosed his tongue,” because for several years an annoying timidity prevented him from expressing himself well in public. This handicap dated back to when he was a schoolboy. One of his professors, careless of the irony of his name, one day called upon the young Constant saying: “Let us see, Mister Chou-chou-chou-navel… can you tell me…?” The poor student blushed with shame and collapsed under the avalanche of laughter from the class. He could not say a word. He suffered from this trauma thereafter. As a missionary, it was enough for him to go up into pulpit to be struck with dumbness. This always bothered him when suddenly, upon his arrival at Batticaloa, Mary delivered him of this suffering. Facing for the first time his new listeners, who looked arrogantly at this young timid missionary, Fr Chounavel, moved by an unknown force, defied the crowd. He started speaking with such conviction and assurance that he won over the most hardened hearts. They could not believe the eloquence with which he spoke.

Fr. Chounavel had many talents: architect, carpenter, painter, sculptor, musician, and writer. He composed many books in Singhalese and in Tamil. We are indebted to him for an English-Singhalese grammar, the translation of the whole Bible, a Life of the Saints for each day of the year, the months of Mary, of the Sacred Heart, and a Preparation for marriage, etc. All that besides his ordinary ministry of preaching and teaching catechism!

To whom or to what can this almost incredible sum of work be attributed? Certainly not to his physical strength: He was short, thin and sickly. But the One who providentially had led him, seemingly “by the nose”, to Ceylon, the “Pearl of The Indies”, never left him alone in his apostolic work. “I am with you, He repeated to him each day as He had to Jacob, and I will keep you everywhere you go.” The Lord and Mary accompanied him faithfully until his death, which occurred on August 23, 1923. When laying the frail body of Fr. Chounavel to rest in the soil of the Ceylon that he had never left for seventy-one years, the Archbishop of Colombo, Antoine Coudert, O.M.I., could say proudly of this great missionary: “This priest gave himself entirely.”

Thirty-three years of paralysis could not stop him Nicolas Laverlochère, O.M.I. (1811-1884)
Zachary, his “mum” and his father