Saved by a Wolf

There is a saying, often verified by the facts: “A special Providence watches over missionaries.” The Oblates in the Canadian Arctic experienced this more than once, especially in the last century, when the means of communication were still very primitive. How many instances could be recalled! Father George Ducot’s adventure, which he survived in March of 1880, is a dramatic example.

Lost in the cold
George Ducot was born in Bordeaux, France, on March 8, 1848. After attending the Major Seminary in that city for two years, he entered the Oblate Novitiate at Nancy. When he was ordained to the priesthood in 1873, he immediately received an obedience for the Mackenzie missions, where he was to spend forty-three years of his life with the Amerindians of that region.

Responding to an invitation to celebrate Easter at the North of Fort Norman, near Great Bear Lake, he set out on the morning of March 17. He was accompanied by his guide Alphonse Koutian. Since he had a team of four good dogs, he expected the trip to take one week at most. He loaded his sled with what seemed sufficient provisions for himself, his guide, and his dogs. In spite of the amount of snow and the intensity of the cold, he left with great confidence. His lead dog followed the beaten path. Near Willows Lake the travelers met up with Bechletsiya, and elderly fisherman, who offered them the hospitality of his camp. “My advice,” he suggested, “is don’t go on any further. The storm has covered the trails, and you will get lost. Even an experienced guide would not find the usual way.” But, Father Ducot had given his word. The Dogrib natives were expecting him. Hence, he hit the trail. Days passed, trails inter-crossed, the dogs were gasping for breath, the provisions were all used up, and Fort Norman was not yet in sight. Badly nourished, three dogs died of hunger. Only Fido was left, the smallest and most affectionate of the team. What next?

Kneeling in the snow
There were no hares in the woods, no fish under the ice. “Let’s move on” said a discouraged Alphonse. “We can do better” replied the confident missionary. “Let’s pray and ask God for help.” It was Holy Saturday. Kneeling in the snow, they offered a fervent prayer to God and Mary, mother of missionaries. Then, they decided to turn back. On Easter morning, they regretfully killed poor Fido for food, in order to subsist a while longer. They still trudged painfully for three days through melting snow. Prayerful invocations rose regularly: “O Mary, protect us.” 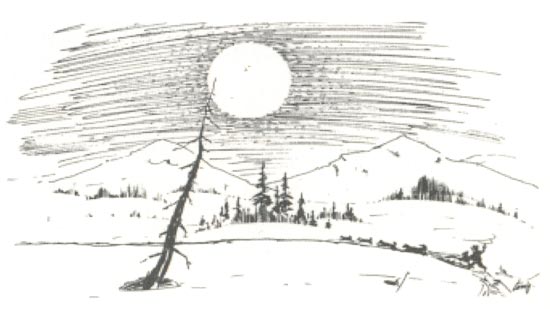 All of a sudden, in a pine clearing, they spotted an enormous wolf, busily tearing apart the skin of an elk. The travelers clapped their hands and the startled wolf ran away, leaving his meager catch to the two starving men. While extracting the small amount of meat left on the skin, Alphonse felt a frozen mass under the surrounding snow. It turned out to be an elk’s bladder, full of blood, that would allow them to survive a few more days.

Oh sweet Providence
With pain and misery our poor vagabonds finally reached Willows Lake once again, hoping to find the elderly fisherman. Alas, he had gone! At nightfall Alphonse exclaimed : “I hear dogs in the distance.” As fast as they could, the two survivors began to run in the direction of the barks. This proved to be the end of their torments. Bechletsiya had killed three elks on the preceding day. Joyfully, he offered to share his feast. Imagine! All this bright red meat, newly cut, was being offered generously to these two men whose stomachs were now in their heels! For a long time they remembered this famous voyage of March 1880. At the time they sang:

Oh Sweet Providence
That provides with open hands
Nourishment that suffices
For all our needs.

The Great Provider of the missions
Roland Sainte-Croix, promoter