The Great Provider of the missions 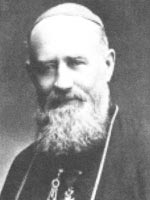 In Mackenzie, during the first half of the 20th Century, one Oblate, who was noted for his curly beard, colorful language, and numerous initiatives, left a lasting impression on the Amerindians as well as on the white settlers. Gabriel Breynat, who was called the “flying bishop” was born at Saint-Vallier, south of Lyon, on October 6, 1867. He became an Oblate and was later ordained to the priesthood by Bishop Emile Grouard, in February, 1892. Two months later he boarded with the Bishop for the missions of the Canadian Northwest. Barely had he arrived among the “Mangeurs-de-Caribous” (Caribou Eaters) at Fond-du-Lac, by the shore of Athabaska Lake, when a letter from France brought news of his father’s death, followed soon by another letter announcing the deaths of his mother and sister. The Amerindians of the mission, on learning of the sorrows that afflicted their missionary, came to him and said: “Well, now that you are an orphan, you will love us all the more, for we will be as a father and mother to you! Please stop the water in your eyes.”

A generous benefactor
In a short time Father Breynat mastered the language and familiarized himself with the customs of the land. Religious authorities soon noticed his superior talents and qualities. In 1902 he was selected as bishop of Mackenzie. He then organized every aspect of his vicariate. He could count on the support of his fellow Oblates, the Grey Nuns and many benefactors for his apostolic work. But there was someone who surpassed all the others in constant and unfailing support: Saint Joseph.

In his memoirs, condensed in three volumes, Cinquante ans au pays des neiges (Fifty Years in the Land of Snow), Bishop Breynat acknowledges honestly: “If the missions in Mackenzie have prospered, it is due to the Holy Patriarch who provided for all our needs. We were able to build four boarding schools, six hospitals, ten churches, and twenty new missions. We were able to purchase a half-dozen boats and an airplane to provide for. and visit, these missions. Many times, Saint Joseph amazingly came to our aid when the food supplies were lacking. But it is our school at Fort Resolution, founded under his patronage, which received the most striking evidence of this fatherly concern.”

A miraculous hunt
In March, 1917, famine literally threatened St. Joseph Orphanage. The fishing and hunting had been insufficient. One hundred orphans, ten nuns and as many Oblates were experiencing the pangs of hunger. One evening, Father Alphonse Duport, superior of the residence, called all the children together and spoke to them seriously: “As you can see, we are in a miserable state… soon we will be out of food. It seems to me that you haven’t prayed to Saint Joseph fervently enough. Well! Get on your knees, on this very day we’re beginning a novena of prayers.” 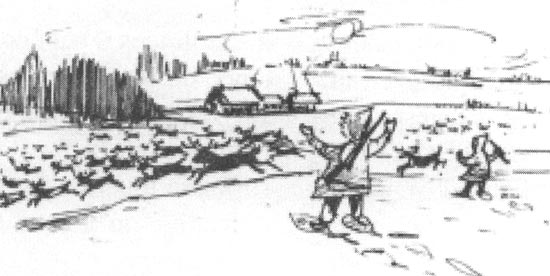 Sister Superior, when approached with the question of how many caribous it would take to survive until spring, replied that it would take one hundred, not one less than that. She added, tearfully, that in two days the present supply would be exhausted.. Then Father Duport summoned two hunters. “Go in that direction on the open lake. We need one hundred caribous, not one less.” “But Father, you know very well that there is nothing left in that direction. No tracks have been seen.” “Go, I say, and kill us one hundred caribous. Saint Joseph owes them to us because we are asking him. He’ll send them to us.”

The two men left, certain that it was a lost cause. After two days of walking, they spotted a herd of caribous emerging around a bend in the lake. At first the hunters were surprised to find such a profusion at this spot, but they didn’t lose an instant. Each went for his gun and ammunition bag. They began to shoot. With each bullet they fired one and sometimes two animals fell. Once the herd had dispersed, the dead caribous were counted. There were one hundred and three! It was at the same moment that the sisters and their orphans were in the chapel praying to Saint Joseph for one hundred caribous… and not one less.

A lay apostle among the Snohomish
Saved by a Wolf