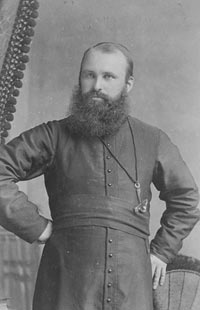 Henri Ghéon wrote a play entitled: La farce du pendu dépendu (The Farce of the Hanged Man Unhanged). As I read one of the adventures of Father Gabriel Morice, O.M.I., I remembered this stage play which bears a certain resemblance to the following story.

Father Morice is noted for his Histoire de l’Église catholique dans l’ouest canadien (History of the Catholic Church in Western Canada) along with his scientific works in anthropology and ethnography. But before all else he was a remarkable missionary for more than twenty years. He was born in France, in 1859, and arrived in British Columbia in 1880. He was ordained to the priesthood two years later by Bishop Louis D’Herbomez. His ministry at that time was to the Chilcotins, the Sekenais, and the Babines. He originated a Déné spelling-book and composed grammars and works of piety in their language.

Marriages regularized
In 1888 he was sent to a Déné tribe known as the Babines. These Amerindians had already been evangelized by the Oblates, but had been without a priest for three or four years. Many of them had returned to their pagan customs: polygamy and cohabitation. One day, when he was called to assist a dying chief, Father Morice took advantage of this visit to refresh the memory of these unfaithful Catholics. “You are not permitted to cohabit with a woman without the bonds of marriage.” Following a few hard hitting instructions on the matter, several illegitimate unions were dissolved or legalized. Only one couple persisted in cohabiting , flaunting themselves before every one else’s knowledge and views. They remained deaf to the reprimands of the priest and the exhortations of the other Catholics. However, after pleadings and repeated discussions Father Morice finally prevailed upon the man to put aside his companion. Since she was not even baptized, she wanted to have nothing to do with this forced separation. She vowed revenge!

A tumultuous night
During the night that followed this separation, an indescribable tumult suddenly awakened the missionary. From the nearby shore a gang, in sympathy with the woman abandoned by her lover, was approaching the mission with shouts, screams and threats. The poor woman, it seems, took a rope and went off to hang herself. The Amerindian code stipulated that whoever caused a death of this kind must pay with his head for the senseless act of the victim.

Fortunately, friends of the Oblate, having been made aware of this troubling development, decided to defend their pastor. Who would win? The friends of the missionary or the insurgent relatives of the hanged woman?

All’s well that ends well
A skirmish ensued to the shouts of “Death to the blackrobe!” A few gunshots were fired in the night, but no one was hit. The faithful parishioners eventually won the upper hand and calmness was restored. But the following morning brought a surprise to both clans! The ex-concubine was found crouching in a remote cabin, very much alive. She had simply feigned to take her life in order to bring revenge on the priest who, against her will, had torn her from the arms of her lover. Everyone felt relieved at this news and the story was oft repeated as the farce of the “hanged woman unhanged”!

We must add, to complete this true story, that the poor “unhanged woman” eventually came to a better attitude. She converted and was baptized in the Catholic Church. As for Father Morice, he spent the last thirty-two years of his life at Saint-Boniface and at Winnipeg. There he found a better environment for his historical writings. This also allowed him to become the first editor of the Le Patriote de l’Ouest journal. He died on April 21, 1938.