Thirty-three years of paralysis could not stop him Nicolas Laverlochère, O.M.I. (1811-1884)

I would like to bear witness to some Oblates who, in spite of the handicap of illness, carried out or still carry out a fruitful apostolate. Their great spirit of faithgave the quality of pure gold to a lives lived in the crucible of suffering. I think, for example, of Fr. Lionel Labrèche who had to go “from his dogsled to a wheelchair,” of Fr. Irénée Aube who, as the result of an accident, had to exchange “the pedals of his organ for the keyboard of suffering” and Fr. Lionel Saint-Amour, whose hospital bed replaced the director’s chair of the Missionary Association of Mary Immaculate. Hats off to these valiant confreres! 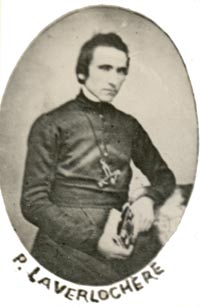 Fr. Nicolas Laverlochère, one of our great missionaries, deceased nearly a hundred years ago, will certainly go down in history. Thirty-three years of paralysis could not dampen his zeal for the Amerindians.

Born in Saint-George-D’Espéranche, in France, on December 4, 1811, Nicolas entered the Oblates first as a lay brother. He was sacristan in Aix when a few months after his first vows he requested and received permission from the Founder to study for the priesthood. At the age of twenty-seven he began his studies under the direction of a kind priest in the suburbs of Marseilles. Two years later, Brother Laverlochère began the novitiate again, but this time as a scholastic. Ordained a deacon, he was chosen for Canada in the autumn of 1843.

With Fr. Jean-François Allard and Bro. Alexandre-Auguste Brunet, he was part of the second Oblate team to reach Montreal. It was in the small church of Acadia that he was ordained a priest on May 5, 1844. Nine days later, the new priest set out from Lachine, on his first apostolic journey to Upper Outaouais in the company of Fr. Hippolyte Moreau. This first trip lasted four months and brought him as far as Lake Abitibi.

Each year thereafter, for the next seven years, the one who is rightly called “the founder of the James Bay missions,” made the same journey, going even as far as Albany. He had the joy of baptizing hundreds of children and of converting dozens of adults to Catholicism.

In 1850, at the request of Bishop de Mazenod, he left for France. He undertook a preaching tour for the Society of the Propagation of the Faith to make known to his countrymen the distress of the native children. His evangelical word stirred up whole dioceses. Louis Veuillot would say of him one day: “No missionary has so impressed me as Fr. Laverlochère.”

Returning to Canada, he went back to the Bay from the summer of 1851. He had only one desire: to live and die for his dear Amerindians. Alas! A hard trial awaited him during his return voyage. Making his way back towards Montreal, exhausted he rolled up one night in his blanket without paying much attention to the wet ground. His companions had the painful surprise of discovering him the next morning paralysed in his tent. They were six hundred miles from Ottawa in the middle of the forest. The thirty-nine year old missionary, lying immobile on the bottom of a canoe and carried over the portages by the men, reached Montreal a few weeks later. From now on this strong soul would live in nothing more than a broken body. The saintly missionary would however survive thirty-three years with this harsh handicap. With much energy and determination he was able to celebrate Mass, hear confessions, and hobbling along visit the sick and bring words of encouragement and comfort to the poorest. It was by dint of courage that he dragged his invalid legs to Maniwaki and then to Temiscamingue, where he arrived in 1868. He died there sixteen years later, on October 4, 1884, at the age of seventy-three.

He who the Amerindians called “Mino-Tagossite” (The One We Like To Hear) still continues in the hush of death to proclaim aloud the value of a life devoted to the Lord and to the poor. He rests in the Amerindian cemetery at the old man Fort Ville-Marie, where a tablet was put up in his honor. Nicolas Laverlochère, brave handicapped missionary, thus continues to take care of his dear chosen children after a life of suffering and merit.