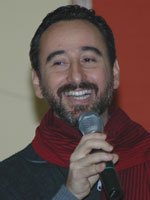 An encounter with another world

“Mondi Riemersi” (Developing Worlds) is a program by the Italian Province in the Roman “Castelli” region, that annually focuses on generally unknown information about one of the countries where the Oblates are working. The week-long program is designed primarily for students. It’s a whole new way of doing a mission. It was the turn of Thailand in 2006. The principal guest was Fr. Claudio BERTUCCIO, who has been there for 13 years. We took advantage of his presence to chat with him.

Claudio met the Oblates in his native city of Messina when he was still a boy. As a child, he had gone regularly to the Salesian oratory. But when the priest in charge was transferred, the group of nearly 100 members was left bewildered; they sought refuge at to the Oblate parish. For Claudio, this was the beginning of a deeper faith journey and an experience of community life that would lead him at first to be part of the Youth Movement and then choose to enter the Congregation.

He followed then the usual program. During his years in the scholasticate, the presence of Fr. Zago inspired him with a love for Asia and a desire to be a missionary on that continent. For that reason, after acquiring a Licentiate in Philosophy, he did his regency in the Philippines where he stayed for two years learning the Tagalog language. He was ordained a priest and began his studies for the Licentiate in Dogmatic Theology. Two years later, everything seemed ready for his return to the Philippines, but Fr. Zago sent him on a detour to Thailand where there was an emergency.

On the contrary. When I left, I clearly stated: “I’m leaving one scholasticate now. I don’t want to go back to a formation house.” My idea therefore was to do something else. In reality, my first obedience in Thailand was to be superior of the scholasticate.

For the first three years, I didn’t have a specific job. Obviously, the first year was spent learning the language. Every day I went to a school nearly 30 km from home. It’s not easy to travel for 30 km in Bangkok and it was really very tiring. I left every morning at 6 and got to school at around 9:30. I had two hours of class, took lunch on the road, and got home at about 4 in the afternoon. After six months of this, added to the intense heat, I asked to be able to stay closer to home. A year later, I took the exams, equivalent to the ones done by a ten year-old child, but they acknowledged that I could now work in the Thai language. For the next two years, I was in a parish where I could practice the language some more.

At first, I helped the pastor, but shortly afterwards, he left for his sabbatical year. Therefore, I became the pastor for nearly two years. In the meantime, they had asked me also to teach at the National Seminary. The courses were completely in Thai. How could I do it? Nevertheless, I accepted because this would make it easier for me to obtain a visa for the country. It was a traumatic experience. The first course I taught was Ecclesiology and even today I am not sure whether my students understood anything. It was a whole new world for me. 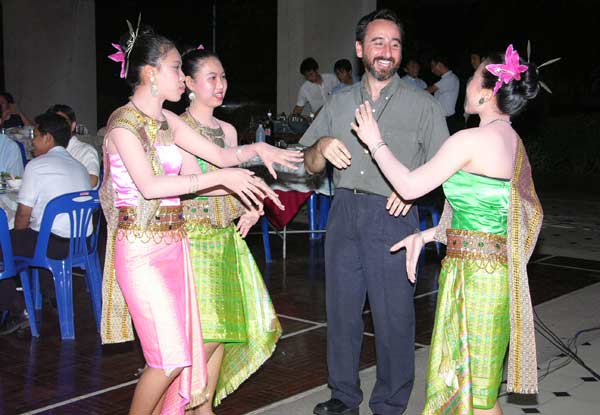 You know… A world that was different from the cultural and religious point of view, but also different from what I had experienced as an Oblate. Here there was an international group; most of them were a generation older than I; there was a different idea of community life; many lived alone and came together only occasionally. They were difficult years and I experienced loneliness because I was isolated, due to the language; often I did not understand what was going on around me.

Three years. There were eight scholastics and I was, in reality, the only formator because of the small number of Oblates. Then I returned to parish ministry for five years. Immediately the Thai Bishops’ Conference invited me to go to the National Seminary. It was at this time that I began to teach more courses. I was a member of the Theological Commission and of the Commission for the Continuing Formation of the Clergy of the Bishops’ Conference. And I preached retreats. For four years I did all this besides being pastor of a parish. During these years, the demands of the Bishops’ Conference became more and more urgent, so when I ended my term as pastor last year, I went to live at the National Seminary.

It’s the only one in all of Thailand. They teach both Philosophy and Theology. This past school year, there were 138 seminarians from ten different dioceses. I am a professor and I teach two or three courses per semester; I am also spiritual director for many of them. And I also continue my work with the Bishops’ Conference.

It’s a quite different concept from our own, even though on the outside they might seem alike: a church, a priest, some Christians. Nevertheless, the territory is incredibly vast. Where I was, I think there were 100,000 people, but there were only a little more than a thousand Christians. Of course, you have to assure that there are religious services, but you especially must follow these Christians who are scattered among the Buddhists and help them not lose their identity. Since it was a city parish, it was made up of people that came from outside and they were already without roots. The main thing was to create activities that would invite them to come back frequently. We had a better than 50% attendance rate. There were also family visits. Within our territory, there was also a slum with many social ills.

Yes and no. The liturgy is very Roman and I think they really want that because, since they are a minority, it’s a way of identifying themselves. Appearances are very important. There are some small elements of inculturation, but it is not specifically a local liturgy. Everything is in Thai and certain body movements are typically local: one never prays with arms outstretched, but with hands joined, because for them, this is the gesture of prayer. Sometimes they celebrate standing, with bare feet as is done in the temples.

First of all, we must understand that we are part of a local Church. The mission in Thailand is particularly linked to what the local Church asks of you. Certainly, every once in a while, it’s important to remember that you can always do more. In the past, the Thai Church had a sort of ghetto mentality, a closed group. The policy of the first French missionaries was to take the Christians from their homes, buy a bit of land, transfer them there and build a church and a village only for Christians around the church. Until 30 years ago, marriage with a non-Christian was forbidden. Those who did so were excommunicated. Slowly they are realizing that things can be different.

Most of us Oblates are in parishes, but in some cases, we have only a handful of Christians. Therefore, we can say that we are in a missionary context, but an open missionary effort is not easy, because the Thai culture is identified with Buddhism. For a Thai, not to be Buddhist means losing his cultural identity.

In general, it’s a question of a “mission of presence,” of building relationships, of a slow passing on of values. And slowly there are some who become interested in Christianity, but in Thailand, one cannot speak of large movements toward conversion.

I think this dimension needs to be emphasized by the local Church. The Bishops Conference had already made its pastoral plan for the next 10 years and this year, the Archdiocese of Bangkok, after the first five years, had a Synod in which it tried to do an evaluation and make plans for the future. As representative of the religious in the diocese, I was part of the commission that prepared the Synod, as well as the one that directed it and wrote the document. I wrote two chapters in it. 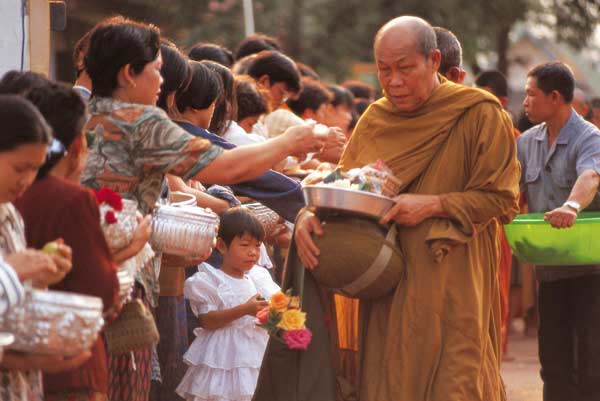 There are especially two aspects that came out during the Synod: the Church as evangelizer and the role of the laity. The Church, probably even because of the influence of Buddhism, is very clerical. Thai Buddhism is very much centered on the person of the monk, the bonze: in some ways, he is the only who can be saved and the only role of the laity is to accumulate merits by taking care of the bonze. This carries over in relation to the priest and explains, proportionately, the high number of seminarians: 138 in a total of 300,000 Catholics.

In some ways, yes. First of all, it’s an open country. It’s easy to enter the country and stay. Because of this, we have many of our meetings there, even though there are only 17 Oblates, of which 5 are Thai. And it is a society that is open to the rest of the world on the commercial and economic level.

Thailand was never colonized by anyone and the Thai are proud that they have a culture that has never been influenced by others, even though today such influence does come in from China, Japan and Korea that have strong economic interests there.

Undoubtedly. At least in the city. In fact, three generations live together: the elderly who belong to a world that no longer exists; the middle-aged who are more open to the world; and the youth who are not much different from all other youth everywhere else in the world. Many aspects typical of Thai culture have disappeared: their way of dressing, of speaking and of relating to one another. For example, it’s typical that one never touches another person and the woman is always very calm. This no longer exists, at least among the youth in the large cities. Here, Japan and the United States set the norm.

I didn’t know much about it. In fact, it was an opportunity for me to discover more about Thailand and tell of my experiences of these past years. I noticed that when people spoke of Thailand, they thought of two or three things: the tsunami, sexual tourism and the beaches. I had to really work to show them that there is something more to it than the stereotypes shown on TV. And there is a richness in this people that needs to be appreciated. 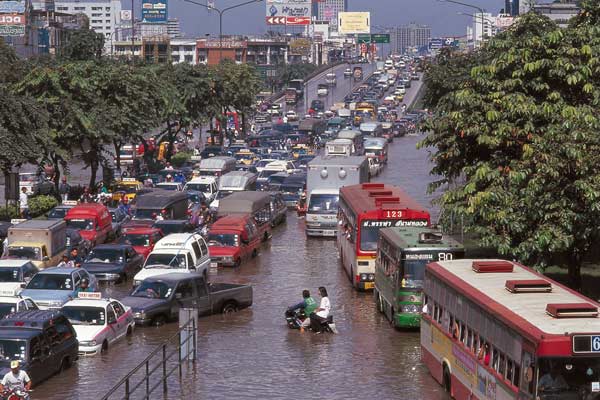 We look at Thailand as Third World. But Thailand does not consider itself to be Third World. In fact, it would not really be correct: in some ways, Bangkok is a better-developed city than Rome. I’m thinking in particular about the highway infrastructure. There are many two and three level highways to move traffic and there are many skyscrapers.