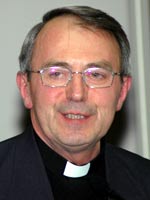 A change of heart

Every six years, at the General Chapter, our Congregation reserves for itself a time of discernment. Wisdom, not only planning, is called for. We intend to capture the missionary needs of today, and then ask ourselves: how can we respond as Oblates? Also, the larger Oblate family is involved in this exercise; for example, representatives of Lay Associates will be present on some days.

The preparation of such an endeavor calls for prayer above all. We need the guidance of the Holy Spirit in order to judge the situation with charity and justice, we need the Spirit’s fire of mutual love in order to be united for the common task. Our Chapter prayer, which we recite often, sometimes daily, expresses our need for divine assistance.

Good thinking and discussion are also needed. This process began last year in community meetings and through the writing of reports about our work in each country and continent. In more recent months, it has continued through gatherings of the elected and the ex-officio members of the Chapter. A Chapter and its preparation are very democratic exercises. The Oblates can make proposals to be discussed. A governance committee studies possible changes in our Constitutions and Rules which must be submitted to a vote later at the Chapter. As for myself, I have to write a report about the state of the Congregation; this report is, to a large extent, done in a team effort. 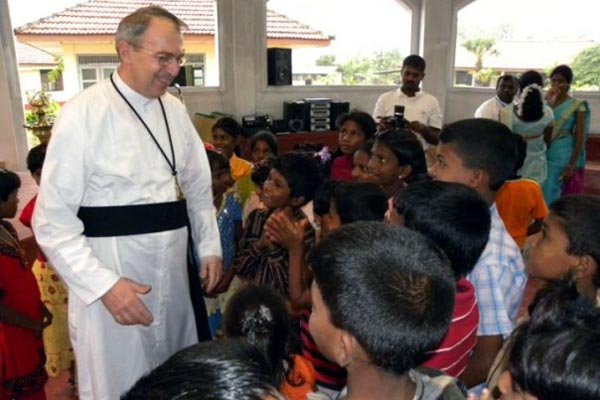 Since there are so many activities going on, a special commission has been named to organize the Chapter in all its details. There will be, for the first time, an outside facilitator to make the discussions in September move smoothly. Worldwide, we try to keep in touch through our website, which recently has been complemented with a “blog.”

This slogan is, above all, about conversion: conversion through renewal of our hearts, conversion in our spirit, conversion in the way we are missionaries. Our logo expresses this idea quite well: a circular dynamic of conversion is created which surrounds the OMI symbol and the whole world.

How did this theme come up? It appeared all of a sudden during a meeting of all the provincial superiors of the Congregation in 2007, in South Africa. We call this type of gathering an “Inter-Chapter meeting.” There, when we examined where we are as a Congregation, we saw many positive things. In recent years we had reached much agreement about more internationality, about a better community life, about a more solid formation of our candidates. Much of this was happening already but we had also the distinct impression that some resistance remained. “What else do we need then?” we asked ourselves. We do not need more and better background papers and mission statements, nor more and better directives or rules; we felt that the one thing missing was a change of heart so as to really do what we had agreed to do. Or rather, the issue was not to do more or better things but to be different in our attitudes, in our way of life. The biblical word for such a change is conversion! “Conversion” was discovered to be one thing missing. 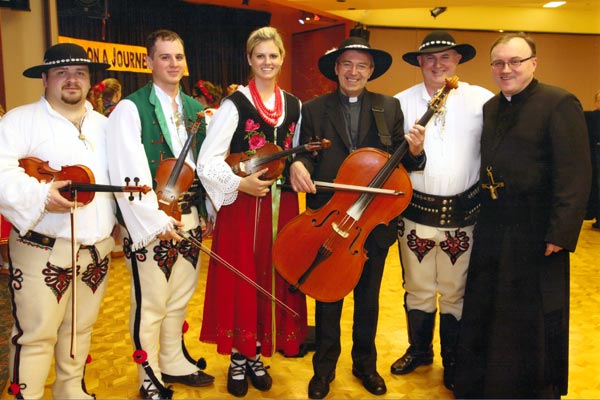 I must admit, our theme is not a very original one. We might appear as people who are trying to reinvent the wheel. The challenge of conversion does not lie in conversation or scientific studies about a very new idea. Above all, it must touch my person and my community. We must not just discuss it but do it! The strength of this theme will come out if we make it real in our lives, if we really change our heart, our spirit, our mission.

Six years ago, at the last Chapter, we used a metaphor to describe the Congregation: it is like a garden where one part experiences spring time, and another part, autumn. This comparison rings true even today.

Parts of the Congregation have been declining, for instance in important sectors of the Western world, and this decline is now accelerating. Other provinces, delegations and missions are growing steadily and sometimes quickly. In some cases, numbers have almost doubled within six years! While globally there is a yearly decrease in total numbers, in terms of Oblates vocations, we have remained stable over the last decade: we count 600 to 700 Oblates in temporary vows depending on the year. The total number of Oblates amounts to 4.138 right now!

These figures indicate a healthy Congregation, but the numbers are not everything. What counts more is the spirit and faithfulness to our vocation. For instance, among the very old Oblates, there are many who express happiness about their vocation when they write me as an answer to a letter of congratulations. There are younger and middle aged Oblates who live up to their call, even risking their lives in dangerous areas, and some of them did lose their lives in recent years. We continue being blessed with our own martyrs and saints. In general, I think we have grown in clarity about our charism of evangelizing the poor and in community spirit. The canonization of Eugene de Mazenod and the beatifications of Joseph Gerard and of Joseph Cebula helped this to happen and have been great blessings; blessings which extend not only to us Oblates but also to all friends of Saint Eugene’s work and to the entire Church. 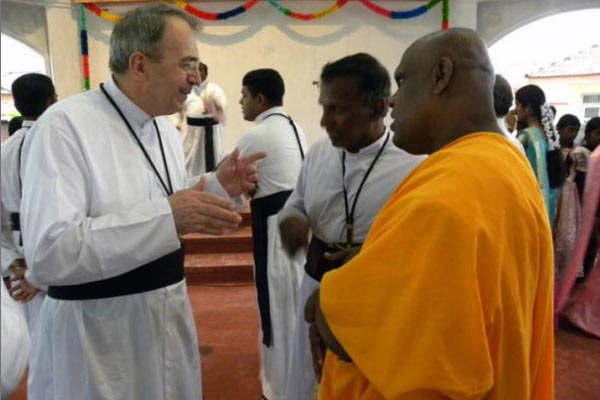 Basic health does not mean that we are allowed to become careless. Perhaps today we realize more than in earlier days how vulnerable we are; what was formerly a stronghold of the Oblates can become very modest. We realize how everything depends on God’s grace, and that every single vocation is a gift. Let us be grateful for every single vocation! Such gratefulness also implies that more efforts must be made in formation, especially of the young, and for vocation ministry.

A question I am asked very often is: what is happening to the Church and to the Congregation in the western countries? Why isn’t there the same exuberant growth as in some sectors of Asia, Africa, Latin America? I try to explain: the West has smaller families, offers more distractions, etc. But I realize that the challenge is larger than that. Beneath the surface, in the West we are dealing with the ideology of secularism. I believe that secularism is one of the toughest challenges the mission of the church has to face, and that we are still looking for answers to most of the questions it poses. How do we react to a world which is organizes itself without reference to its Maker? Are we ourselves already infected by secularism and becoming forgetful of God? To help find answers, one direction we could take is increasing cooperation between Oblates and Lay Associates and in particular, doing much of our mission together with the youth of today.

As a consequence of the spiritual weakening of the West, the strength of the Church, and of our Congregation, is moving to the south. This constitutes another challenge in itself, especially for us who are dealing with a world-wide mission. Missionaries are no longer going from “Christian countries” to the “mission countries” as in the past, they are crisscrossing everywhere. This is a wonderful development, but we must still get used to it and organize ourselves accordingly. 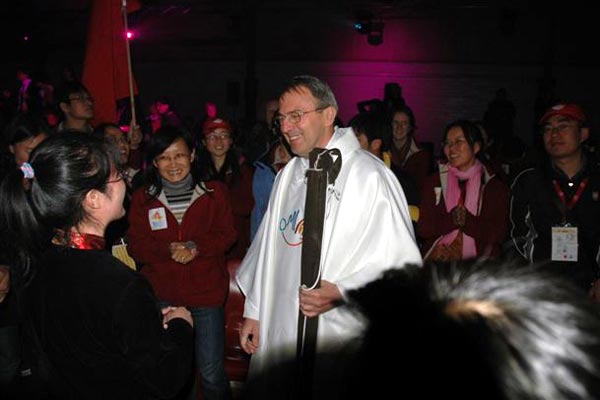 Special activities in the Congregation over the last years indicate the new challenges and inroads of mission as we Oblates perceive them; there have been symposia on Interreligious Dialogue, on Indigenous People, on Mission with Youth and on Migration; there have been meetings on Lay Associates and on the vocation to Brotherhood, and we have been strengthening Justice and Peace ministry.

The more I hear about the Haiti earthquake and its aftermath, the more I realize that it is such an enormous tragedy. 170,000 bodies have been found; others are still under the rubble, and most of this has happened in just one city which is the capital itself. It is said that three quarters of the buildings in Port au Prince are destroyed!

We Oblates have been spared the worst; only one of us died, Brother Weedy Alexis. We lost the provincial house and the theologate. On the other hand, places in the interior are inundated with people leaving the Capital and we are trying to assist them as best we can through our parishes and other structures. Our orphanage in Les Cayes is accommodating many additional orphans — there are more than 600 by now — and helping the wounded and the hungry. We do not have much news from our parish in the Capital where communications are more difficult.

The provincial administration for our 120 Oblates is displaced. It will be very difficult to organize studies for our scholastics this year; maybe a group of them will try. There has been some thought about whether our young Oblates in initial formation, about 35, should not go abroad, but the Provincial, who himself is a professor of theology, says that together with the other Congregations, they would rather stay and study their theology in the context of their country. Such a tragedy makes us question our faith, our moral life and the way we are missionaries, and these questions are better studied on the spot, even if it means the loss of a semester or two due to the circumstances. Full reconstruction of the facilities will take time and has to follow the rhythm of the city.

Interview for the magazine Missioni OMI
Issue of April 2010