The Boisgelin mansion is situated on Saint-Sauveur or Quatre-Dauphins square. This grand mansion borders on Mazarin Square or the Quatre-Dauphins. It formerly belonged to the Laurens de Brue and Laurens de Peyrolles families. In October of 1774, the daughter, an only child, married a Boisgelin, an illustrious family from Britanny. Consequently, the Laurans properties devolved to the Boisgelin.

In 1808, Eugénie de Mazenod married Armand de Boisgelin and lived in the Boisgelin mansion until Mrs. Boisgelin died in the summer of 1813. This lady owned property to a value of 700,000 francs to be divided among her five children. Upon the death of his mother, Armand issued a statement to remind everyone that his marriage contract gave him the right to 128,000 francs in cash, plus 55,000 francs (dowry from his wife) and to one sixth of the total of the inheritance. If there was not enough cash available, Armand would accept the lands and the castle of Saint-Martin-de Pallières which was worth 192,000 francs. But before he died, Armand’s older brother and his sister had had their mother’s will changed to the effect that it left practically nothing to Armand. 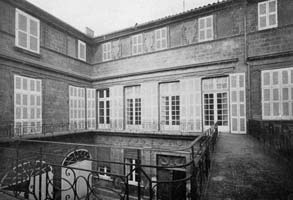 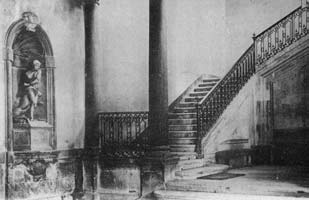 August 19, 1813, Father de Mazenod wrote to his mother that this will was “a master piece of iniquity […] In the meantime, we have thought it indispensable that Armand and his family should as soon as possible leave that den of thieves where they were going to settle them in the paddock they use for camping.” Armand, Eugénie and their children then came to live on Papassaudi street with Mrs. de Mazenod until 1848. A long court battle ensued between Armand and his brothers; the case was still unsettled in 1827. (Eugene’s letters to his mother, August 21, 1817 and March 4, 1827)

The letters that Eugénie and Armand received before 1847-1848 were all addressed to Papassaudi street. After this date, they are addressed to Quatre-Dauphins. What happened? It seems, initially, that Armand did acquire the lands of Saint-Martin-de-Pallières. From his correspondence, we see he goes there often. As for the Boisgelin mansion, Bishop de Mazenod bought it to give to his nephew, Eugène de Boisgelin upon the occasion of his marriage. In an April, 7, 1842 letter to his mother, the Founder wrote: “I am neither mother nor grandmother, but I find in my heart an uncle’s sentiments that are more than paternal.” And in April of 1843, when he was negotiating with a Mrs. Roux Bonnecorse in view of Eugène marrying a Miss Roux, he wrote on the 19th of April: “You can officially communicate the fact that you know that it is my intention to guarantee for my nephew the fine mansion which belongs to me. It is a piece of property with an intrinsic worth of 100,000 francs […] I made more than 10,000 francs worth of improvements in it.”

Eugène married a Miss Angélique de Sallony on November 25, 1847 and they went to live in “his mansion” on Quatre-Dauphins. Armand de Boisgelin and Eugénie went to live with their son. Bishop de Mazenod’s visits to them were infrequent. (REY, A., Histoire d’Eugène de Mazenod, II, p. 261, 309, 401)