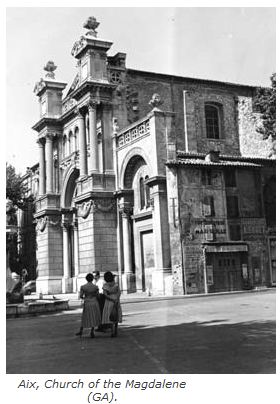 The site of the old church of St. Mary Magdelene is but a short distance both from both the de Mazenod mansion on Mirabeau avenue and the home of the Joannis on Papassaudi street. It was the parish church of the de Mazenod and Joannis families and was dedicated to Saint Magdalene. It was here that Eugene was baptized. The building was very old and in lamentable condition and was demolished at the end of the 18th century. In 1791, parish services and the title were transferred to the church of the Dominicans (Place des Prêcheurs) who had been expelled by the Revolution.

The baptismal font of the old church was transferred as well. That is how the marble font which was used to baptize the Founder of the Oblates was conserved. At the beginning of the 19th century, this church also received the statue of Notre-Dame de Grace, originally a gift from Saint Bonaventure to the Order of Friars Minor of Aix and kept until that time in their monastery on Cordelier [Franciscan] street. In 1814, it was before this statue that the members of the youth association prayed their novena when Eugene was seriously ill from typhus which he had contracted in his ministry to the Austrian prisoners of war in the city jail. On May 3, 1814, Abbé de Mazenod, recovering from his illness, came to celebrate a Mass of thanksgiving at the altar of the Cross in the Blessed Virgin’s chapel.

It was also in this church that Abbé de Mazenod began his priestly ministry in March-April of 1813, preaching in Provençal during the Sundays of Lent. On April 9, he wrote to his friend, Charles de Forbin-Janson: “Each Sunday in Lent I have preached in Provençal at 6:00 a.m. in the Magdalene church for the instruction of the people. As you can imagine curiosity brought lots of others besides country-folk; but the latter and the low class of society whom I had principally in mind turned up in such numbers that I had reason to hope that it will have been for the greater glory of God.” (Spiritual Writings 1812-1856, Oblate Writings, I, vol. 15, no. 116, p. 49)