Mirabeau avenue is the main artery of the city of Aix-en-Provence. It was Archbishop Michel Mazarin, the brother of King Louis XIII’s minister who took the initiative of having it built in 1641. The archbishop expanded the city toward the south with Mirabeau avenue forming the northern axis. Initially, it was simply an ordinary street which became an avenue for carriages from 1651 on which, in point of fact, meant that all the residences along this thoroughfare were reserved for the families of the nobility. 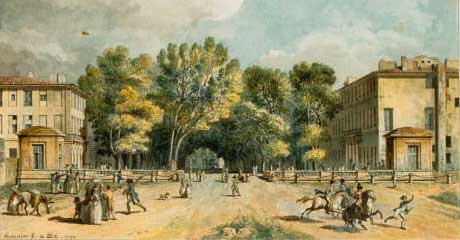 The one who lent his name to the avenue held sway over the French Revolution in its early days. He was called Honoré-Gabriel Mirabeau, Count of Riqueti. During the Estates General held in 1789, he was rejected by the nobility, but was elected by the Third Order which spurred him on in his commitment to new ideas. He thus became an iconic figure of the Revolution. It was only in 1876 that his name was bestowed upon this main thoroughfare of Aix. It is on this avenue reserved for noble families that Eugene de Mazenod’s family home, place of his birth, is situated.