At one time, it was a rural property on the road to Avignon. Now, it is has been engulfed by the city of Aix. It once consisted of a house and some land where grapevines and olive trees were cultivated. On April 19, 1728, this property was sold by Gaspar Antoine de Venelle, the husband of Louise de Mazenod, to Jean-Baptiste Joannis, counselor of the King, royal professor of medicine. It was perhaps the name of Louise de Mazenod who had no direct link with the family of our Founder that led Father Bernad into error. In his collection of paintings, engravings and photos (p. 50) he says that l’Enclos is the country home of the de Mazenod family. In fact, from 1728 on, this property became the country home of the Joannis family. (See Marbot, Histoire de Notre-Dame de Seds) It was in this house, on February 2, 1778, that the marriage contract between Marie-Rose Joannis and Charles Antoine de Mazenod, father of the future Eugene de Mazenod was signed (See LEFLON, I, p. 31) Since this house is near the church of Notre-Dame de Seds, Eugene de Mazenod thought of making it his headquarters for his ministry. While still in the seminary of Saint-Sulpice, he wrote to his mother on March 6, 1809: “As a hermitage it fitted in perfectly with my plans for the time when I shall be in the ministry.” (Spiritual Writings 1794-1811, Oblate Writings I, vol. 14, p. 105) He was thinking of setting up his first mission team on this property of l’Enclos and of making the church of Notre-Dame de la Seds the centre of his endeavor. But, as he said to his friend, Charles de Forbin-Janson “The Blessed Sacrament nuns politely whisked it from me by sleight of hand.” (Letters to the Oblates of France 1814-1825, Oblate Writings I, vol. 6, no. 5, p. 9) While seeking another place to establish his first community, he had the good fortune to find the former Carmelite convent in the city centre. After various inquiries in the city and outside the city, it was at l’Enclos as well that the Association of young people founded by Eugene de Mazenod in 1813 gathered. 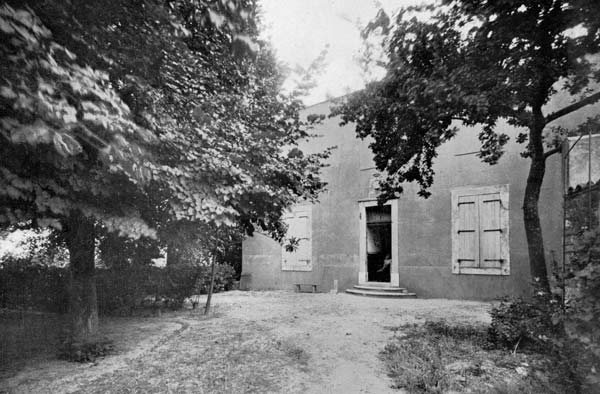 After the death of his mother, Eugene’s sister received this property as a part of her inheritance (December 17, 1851), but she had no intention of keeping it and, on October 23, 1856, sold it to her brother who could use it as a place for his Oblates to go for rest. As a commemoration of this transfer of property, we can see in the gable end of the house the coat of arms of Bishop de Mazenod, bishop of Marseilles. Thereafter, this property was called “Retreat for the Oblates.” The provincial council wanted to keep it because of its link to our Founder and because it was good to have a place of rest for the Oblates. It was with this in view that they had restoration work done towards the end of 1871.
On the occasion of the first expulsion of religious at the decision of Jules Ferry in 1880, the archbishop of Aix constituted the church of Notre-Dame de la Seds as a parish and appointed three Oblates to staff it so that not all of them would be obliged to leave the city. They brought to l’Enclos the statue of the Virgin Mary which Father de Mazenod had blessed on August 15, 1822, together with the altar of the first vows and the community archives. Since the measures taken against religious were not being stringently applied at the time, the Oblates were able to return to their community at the centre of Aix about one year after the laws of expulsion were enacted. The law was more strictly enforced during the second expulsion of religious, a measure decreed and organized by the Prime Minister Émile Combes in 1903. Consequently, the Oblates sent to Rome, the statue of the Virgin Mary, the altar of the vows and the community archives and they were obliged to disperse. This dispersal was an occasion for foundations in different countries of Western Europe. After the expulsion of 1903, the Oblates definitively left l’Enclos, but they were to return to Aix-en-Provence some years later.