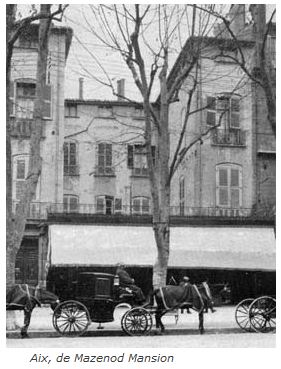 The Mazenod mansion on Mirabeau avenue in Aix was built towards the end of the 17th century by a family of dyers, the Chantre, who sold it to Antoine de Laugier, a knight of the order of Saint Michael and assistant to the Senior Commissariat Officer of Provence, whose only daughter married Charles Alexandre de Mazenod, President of the Court of Accounts, in 1743. It is not the largest building on Mirabeau avenue, but the interior is richly adorned in 18th century style: white and gold wainscoting, intertwined garlands on the ceilings, plastered walls, painted pier-glasses, etc. “This house, which his family was to leave forever in 1790, would always remain the cherished, but sad, symbol of his family life shattered by the upheaval of the Revolution and the symbol of his personal life disrupted in its very prime.” (LEFLON, I, p. 35) It was in this house that Eugene’s father and his two uncles were born. And, in the following generation, Eugene and his two sisters, the eldest Charlotte Élisabeth Eugénie, who died at five years of age and the youngest, Charlotte Eugénie Antoinette. To care for this little group of people, there were twelve servants. Their way of life was that of the rich nobility prior to the Revolution, but from his very infancy, Eugene was subjected to the threat of the Revolution. For example, on December 14, 1790, he could see across from his house the bodies of two of his father’s friends, executed by the revolutionaries and hung from the street lamps. At present, this house is occupied by a store and rented apartments.