After his return to France in 1802, Eugene joined a charitable organization that aimed to help prisoners. By a decree dated December 22, 1806, the mayor of Aix even appointed him administrator of the work called “of the prisons” even though in the 19th century, there was only one prison in Aix. It was called Forbin Barracks on Gambetta Avenue, reworked in 1833. Father Rey uncovered two reports written by Eugene at the beginning of 1807 in which he described the material and moral condition of the prison. On October 6, 1807, he resigned from his post. He reason he gave for resigning was that of “family business” which was consuming all his time. According to Father Rey, the determining factor seems to have been “the official link that his title of administrator of the prisons established between him and the imperial government which revealed itself to be more and more a persecutor of the Pope and the Catholic Church.” 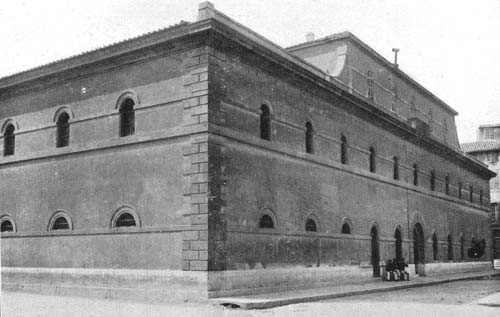 Prison ministry took its place as well among Eugene’s first apostolic activities as a young priest in Aix. In an April 9, 1813 letter to Charles de Forbin-Janson he talks a little about it: “On Sunday too [after preaching at the Madeleine church], I used to go to the prisons to give an instruction to those unfortunates in French, after which I go on to the confessional until 6 pm, to hear the confessions of those of the prisoners who present themselves. Before and after the instruction, some hymns are sung. I finish up by giving them evening prayer. From there I hurry home, where I find assembled the finest flower of masculine piety in our poor town.” (Oblate Writings, I, vol. 15, no. 116, p. 49)

In January of 1814, the allies invaded France. Napoleon, whose armies had been routed, concentrated in the South of France his Austrian war prisoners. Aix received two thousand of them. Typhoid fever took hold among them; medical doctors and the chaplain died. Eugene offered his services to the diocesan administration to replace the chaplain. He, in turn, was struck down by the illness. He took to his bed on March 10 and received Extreme Unction on March 14. Thanks to the prayers of the members of his Youth association, he recovered after a few months (letter to Forbin-Janson and his father, Oblate Writings, I, vol. 15, no. 123, p. 62, no. 126, p. 70-71).