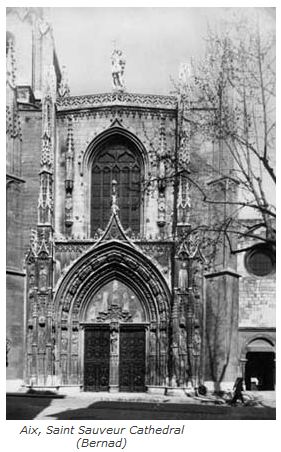 The cathedral of Saint-Sauveur in Aix is a gothic structure built in the middle ages (13th and 14th centuries) and which replaced a previous church which dated back to the beginnings of Christianity in Provence.

After his return to France in 1802, Eugene liked to attend the religious ceremonies in the cathedral. For example, in a letter to his father, we find that he attended Mass there on Holy Thursday, March 29, 1804. According to Father Rey (I, p. 50), it was in this church, “in preference to the other churches of Aix, even of his own parish church, that he attended the liturgical celebrations on Sundays and on feast days.” He was familiar with Bishop Champion de Cicé, the archbishop of Aix from 1802 to 1810, who allowed him to attend recitation of the Divine Office with the canons in the choir stalls.

On the occasion of the great mission of Aix from March 12 to April 24, 1820 the Missionaries of Provence preached in the church of the Mission, at Saint-Jean and at the cathedral. The men who attended the ceremonies were so numerous that Father de Mazenod had to obtain the archbishop’s permission to remove the grille which separated the choir from the rest of the church. This incurred the displeasure of the canons who prevented the superior from giving the closing sermon on the Sunday, April 30. The crowd voiced their displeasure with shouts and threats. Father de Mazenod called upon the people to regain their composure. The archbishop subsequently allowed him to hold a procession and give the closing sermon on the following Sunday, May 7.

Bishop de Mazenod presided quite often at ceremonies in the cathedral of Aix. It was there that he gave the important speech at the closure of the provincial council on Monday, September 23 1850. On January 14, 1857, he presided at the funeral Mass of Bishop Joseph Darcimoles, archbishop from 1847 to 1857 and recorded in his diary entry of that date: “This is the sixth archbishop of Aix that I have seen pas away.” He had certainly attended the funerals of the two predecessors, Cardinal Joseph Bernet who died on July 5, 1846 and of Bishop Jacques Raillon who died on February 13, 1835.