The Oblates of Mary Immaculate were always quite involved in the minor seminary of Ajaccio before taking over direction of it on several occasions after 1912, but especially from 1939 to 1971.

The Shifting Fortunes of the Institution from 1836 to 1912
When Bishop Raphael Casanelli d’Istria bought the monastery in Vico in 1836 he was thinking exclusively of sending seminarians from his diocese there. The plan to use this house did not prove feasible since it was too far removed from Ajaccio. The bishop called upon Father Hippolyte Guibert’s sense of the practical, since he was the person in charge of clerical education in the diocese. Father Guibert wrote to Bishop de Mazenod in the spring of the year of 1836: “If you were inclined to think that I am annoyed at having taken on this foundation once again, I would tell you that, first and foremost, I had in view the well-being of the major seminary, where, from now on, we will not be in a position to receive young people who come to us from the milieu of the world with its corruption or with an inadequate training.” 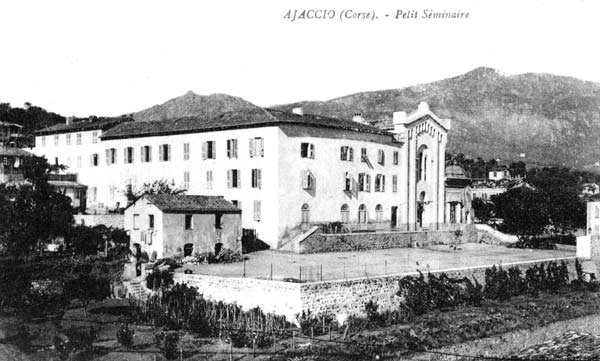 Father Guibert rented a house which he adapted to receive one hundred thirty students on November 5 of that year. Bishop Casanelli entrusted the teaching there to a few Corsican priests and by some others coming from the diocese of Grenoble under the direction of Canon Guédy. The first academic year what not one of the happiest: over crowding of students in makeshift quarters, expenditures that were both ineffectual and beyond the resources of the diocese, misunderstanding among the professors, rebellion on the part of the students against one of the professors, etc. Bishop Casanelli had too grand and fine a view with regard to Father Guibert’s plans. He released Canon Guédy from his position and appointed Father Guibert the immediate superior of the two seminaries.

The 1837-1838 academic year was spent in the Ottavi house, evacuated by the seminarians from the major seminary with one hundred students from the three lower classes alone under the direction of diocesan priests and of one house superior, Abbé Sylve, former superior of the minor seminary of Forcalquier, Father Guibert’s trusted friend. The upper classes were gradually reinstalled during the following year. In 1837, Father Guibert suggested that Bishop de Mazenod entrust the direction of the house to the Oblates; Bishop de Mazenod stoutly opposed this move. (See Diary of February 21, 6 and 18 of September 1837)

In a moment of discouragement, Bishop Casanelli announced via a pastoral letter dated August 10, 1847 that the minor seminary was dissolved: “For us,” he admitted, “it would be a too great responsibility to continue a state of affairs that would be deadly for the two communities. We prefer to salvage one rather than for both of them perish together.” It does not seem, however, that this decision was strictly applied. Father Jean Joseph Magnan, Father Moreau’s successor, a man of many talents, had to convince the bishop to allow him to at least leave him the students of the superior classes according the advice offered by Father Guibert in 1841. The two communities lived under the same roof until 1850. The new minor seminary-college whose construction was begun in 1836 on the site of the botanical garden was then finished and received more than three hundred students under the direction of the diocesan clergy. Like Father Guibert in former times, Father Magnan did not, in 1849, succeed in convincing Bishop de Mazenod to put the institution under the Oblates’ direction. Afterwards, two other houses provided a few students for the major seminary: the church school of Vico and the minor seminary-college of Corte.

Bishop Casanelli d’Istria felt strongly about opening a minor seminary in his birth place, Vico. In 1846, he took up again the plan he had tried to carry out ten years before. Father Magnan looked upon it favourably, but Bishop de Mazenod was less than enthusiastic and was not upset to see that dream go up in smoke. With dogged determination, the bishop of Ajaccio finally succeeded in opening a clerical school in the monastery in Vico under the direction of the Oblates. It functioned more or less from 1855 to 1864 with some forty students, most of whom were externs.

Twelve years later, Bishop Gaffory, bishop of Ajaccio from 1872 to 1877 opened a seminary-college at Corte in a house Bishop Casanelli had had built for priests’ retreats. This institution under the direction of the diocesan clergy housed a student population of two hundred and became a nursery of outstanding men, but, like the minor seminary of Ajaccio, provided fewer and fewer major seminarians.

In the report of the provincial of the Midi at the General Chapter of 1898, this is what we read about the major seminary at Ajaccio which, at the time, had ninety-five students: “There exists a gap liable to prejudice formation to a considerable extent and consequently have an impact on the clergy. That is the absence of a minor seminary to prepare students from the double point of view of studies and piety. At twenty years of age, they come to the major seminary hardly rough-hewn grammatically when they are trained morally.” It does rather seem that the majority of the students came from priest-run schools as they did previous to1836. As a result of the law of separation of Church and State in 1905, these two seminary-colleges were closed down and their properties were confiscated by the state.

The Minor Seminary at Ajaccio from 1912 to 1971
When he assumed the office of bishop of Ajaccio in the fall of 1906, Bishop Jean-Baptiste Desanti (1906-1916) found a diocese in ruins. In 1912, he asked Father Bunoz to open a minor seminary with the title of Notre-Dame in the quarters belonging to the Sisters of Saint Joseph. The students, initially hardly numbering a dozen, went from thirty-two in 1913 to one hundred and sixty-seven in 1914. The priests who were working with Father Bunoz took over direction of the house upon his death in 1917. That same year, the seminary was transferred to the former convent of the Capuchin sisters.

Bishop Augustin Simeone, Bishop Desanti’s successor, brought the Oblates back in 1925. He then entered into an agreement with Father Pierre Mounier, provincial of France-Midi by which he handed over the minor seminary in perpetuity to the Oblates who committed themselves to provide at least four priests: the superior, the spiritual director, the prefect of studies and the treasurer. Father François Agarrat was superior until the Oblates’ departure in 1927-1928, as a result of a canonical visit by Father Eugene Blanc, assistant general. In his report to the General Chapter of 1932, the provincial of Midi wrote: “Faced with the lack of personnel, we siezed the first favorable opportunity to abandon the minor seminary of Ajaccio. It was only grudgingly that we had accepted it in order to please Bishop Simeone. After having established it in good running order […] we handed it back to the clergy of the diocese.”

Upon arriving in his diocese in 1938, Bishop Jean-Baptiste Llosa, bishop of Ajaccio from 1938 to 1966 found the institution in a sad state of affairs and once again made a pressing appeal to the Congregation. Father Mollat, s.j., the apostolic visitor of seminaries for the ecclesiastical province of Aix wrote to Father Théodore Labouré on April 5, 1939 to bolster the bishop’s appeal. Initially, the General Administration showed itself favourable, but changed its mind when confronted by a refusal on the part of Father Victor Gaben, the provincial of Midi. According to him, experience had adequately proven that a personnel made up of Oblates working with diocesan priests lacked unity. On the other hand, the province could not provide a full staff of at least ten priests. When Father Hilaire Balmès, the superior of the major seminary, insisted on it, Father Labouré decided to send a superior and a few priests.

Father Theodore Labouré made the canonical visit himself in 1942. He praised the fatherly discipline – something already noted by Father Blanc in 1927 – as well the life or study and prayer life of the students, the good rapport between the Oblates and the two diocesan priests who were still teaching there. He stressed the apostolic spirit of the priests charged with the pastoral responsibility of three parishes and the task of recruiting for priestly vocations. Finally, he promised to send two more priests.

In 1946, the personnel was transferred to the jurisdiction of the Midi province. Father Albert Schneider was appointed superior in 1947. His successors were: Fathers Henri du Halgouet in 1953, Pierre Mercier in 1956, Paul Pellegrin in 1959 and Jean-Pierre Eymard from 1963 to 1971-1972.

The number of students rose to about eighty in 1947, but fell rapidly. On the occasion of the canonical visit of 1958, Father Daniel Albers observed that there were only forty-seven students with only five of them in the upper classes. Of the three hundred and fifty students who had passed through the institution from 1940 on, only about forty became priests or went on to the major seminary. Father Albers suggested sending a few of the older students to Aix or to Montpellier, but to continue working with the younger students since Corsica was a genuine mission country. That is what was done from the 1959-1960 academic year on.

In 1965, the institution took the title of Notre-Dame as private school and opened its doors to all boys who wished to receive a more fully developed Christian education. The number of students climbed immediately to more than one hundred and thirty. A few Oblates concerned themselves with spiritual animation while classroom teaching was given over to lay professors. The school became a mixed school in 1971 under the name of Saint Paul and the Oblates ceased being responsible for it.

The hesitation of the authorities of the Midi province with regard to the minor seminary of Ajaccio coincides well with the attitude of Bishop de Mazenod as regards this kind of an institution, an attitude that Father Alfred Yenveux in his Commentaire des Saintes Règles(II, p. 32-33) summed up as follows: “Without considering them as diametrically opposed to the general objective of the Congregation, our venerated Founder considered them [minor seminaries] as works out of the ordinary that we should not accept except when we could not reject them without jeopardizing the success of works that were more particularly specific to the Oblates, but to which the Oblates were obliged to dedicate themselves with zeal when the Superior General deemed it necessary to accept them.”