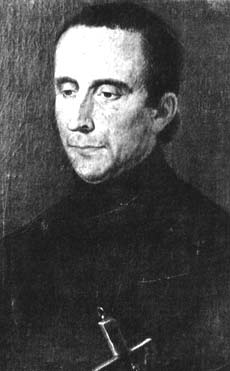 The priestly vocation of Carlo Domenico Albini became manifest towards the end of 1807. It had been fostered by a good Christian upbringing, in spite of the French Revolution and the death within two years of each other of his father and mother (1804 and 1806). In October 1810, he entered the major seminary of Nice where he was outstanding for his love for study and his growth in spiritual maturity.

After he was ordained priest, his first ministry was in his own parish in Mentone. For some five years he was engaged in the ordinary pastoral ministry – catechesis, confessions, preaching – which was so necessary in that period of religious crisis. He especially exercised this pastoral care in the more isolated areas of the parish.

From October 1820 onwards, he was chaplain to the Augustinian Hospital (Sisters of the Mercy of Jesus) who were responsible for caring for the sick in the hospital of Carnolès in Nice. Father Albini carried out this task with great seriousness and effectiveness, in spite of his relatively young age, the difficulties he encountered from the Mother Superior, and his sensitive and reserved character. Because of the forced departure of the hospital nuns in the beginning of 1823, Father Albini returned to Mentone, but he did not stay there long. In July of the same year, he was appointed to teach moral theology in the major seminary of Nice. He did not limit his activity to teaching, however, but gladly did priestly ministry in the city’s cathedral. It was when he was helping the parish priest conduct a retreat for ex-prisoners and misfits in July 1824 that he met Fathers de Mazenod and Suzanne: the latter had been called in to preach this retreat.

Father Albini was struck by their apostolic zeal, by the missionary ideal which animated them, by their fraternal relationship. From this he began to entertain the idea of living in a religious community. At the end of the retreat, he decided to join the recently founded Society of the Missionaries of Provence.

The Bishop of Nice was at first opposed to his leaving, for he did not want to lose one of his best priests. It was only after he had received a formal promise that the Oblates would open a house in his diocese that he allowed Father Albini to leave. The latter arrived in Marseilles on July 14th in the company of the two missionaries.

Religious, Educator and Missionary
On July 17th he began his short novitiate. The joy he felt in the new choice he had made was somewhat overshadowed by his scruples which the firmness of the Founder helped him to overcome.

Only twenty days after his perpetual oblation which took place on November 1, 1824, he preached his first mission in Allauch. Soon also, he was appointed professor in the Oblate scholasticate in Aix. In 1825, he was to undertake to translate part of the Constitutions and Rules into Latin in preparation for their presentation to the Holy See for approval. It was Father Albini who pressurized the Founder and convinced him to go to Rome in view of obtaining an official recognition of the Congregation.

Father Albini preached a number of parish missions and it was during one of them, (Aubagne, February 19-March 20, 1826) that Father Tempier arrived to tell the missionaries of the definitive approval given by the Pope to the Institute and to its Constitutions and Rules. Father Albini was among the group of Oblates who, on July 13, 1826, during the General Chapter, pronounced anew their religious vows which were now fully valid and effective.

Because of his missionary efforts and his rather weak and delicate physical constitution, he was ill in June 1827, at the end of the missions of Valiguières and Pouzilhac, the last mission he was to preach in France. In October 1827, Fathers Tempier and Jean-Baptiste Honorat took up residence at the major seminary of Marseilles which had just been entrusted to the Oblates. Father Albini was appointed to teach moral theology there. At the end of July 1828, he was given the spiritual care of the “Work for the Italians” in Marseilles. This was an apostolate among the Italian immigrants and Father Albini carried it out with passionate dedication.

The period 1829-1831 was especially difficult for the internal life of the Congregation. Father Albini remained constant in his personal resolve to improve the observance of the religious life and he did not hesitate to let some of his confreres know that, in his view, they were not entirely faithful to their Oblate vocation.

On September 19, 1834, the Founder gave an affirmative reply to Bishop Casanelli d’Istria of Ajaccio who was asking for an Oblate community in Corsica to take over the major seminary of Ajaccio and also to preach parish missions throughout the entire island. The Founder promised him two of his best collaborators, namely, Fathers Guibert and Albini. On March 9, 1835, Father Hippolyte Guibert accompanied Bishop Casanelli d’Istria on the journey to Corsica: this was the first Oblate mission outside the French mainland. Father Adrien Telmon and Brother Jean Bernard Ferrand joined them on the following April 25.

Father Albini had to wait until October 1835 before he could join the missionary group. The Founder, in fact, had hesitated a great deal before letting him go, for he saw Father Albini as almost indispensable for the apostolic service he was rendering to the Work of the Italians. Only after Father Guibert had come back and intervened with convincing arguments did the Founder permit Father Albini to leave and take up his new missionary endeavours.

The new community was established in Ajaccio. Father Guibert was director of the seminary; Father Albini was a seminary professor and occasionally replaced Father Guibert, when the latter was away on his trips to the continent.

In May 1836, Bishop Casanelli d’Istria gave the Oblates the former Franciscan monastery at Vico, located in the interior of the island. At the end of the scholastic year, Father Albini spent the vacations there and was preparing himself to preach the first parish missions.

From August 11 to August 30, 1836, he preached the mission of Moïta. It had been ten years since he had preached his last mission. It was also the first mission to be preached in Corsica since St. Leonard of Port Maurice had given his last mission on the island (Moïta, 18 October 1774).

His missionary activity was noted for solidity of doctrine, his concern to be understood by the people and, consequently, the use of simple and clear language; and further, due to his personality, for his ability to reconcile feuds between families and clans living in the areas that he evangelized. The living conditions of these people were far from easy.

In November 1837, he was in Ajaccio to preach the spiritual retreat to the diocesan clergy. On that occasion, the project was mentioned of putting him in charge of the formation and renewal of a group of priests who would reside at the monastery of Vico. This would have occasioned a radical transformation of the community there. Father Albini was quite concerned. While he acknowledged the vital importance of this project, he feared that putting it into effect would seriously handicap parish missions. He considered the latter to be of prime importance and he himself was very much drawn to this kind of ministry. The project was not put into effect, however.

Only after a prolonged period in Ajaccio as a seminary director was Father Albini able to resume preaching missions in the spring of 1838. He preached his last mission in October of the same year.

He became seriously ill in November 1838, to the point that his death was feared to be imminent. He rallied somewhat in February 1839 and was beginning eagerly to look ahead to more missions preaching. His health become more problematical, however, and he began to weaken. He died on May 20, 1839.

Father Albini’s demise was felt as a grave loss for the Congregation, especially so by the Founder who considered him an example of apostolic zeal and holiness of religious life that all Oblates should look up to as a model. The people, too, lamented his passing and began to look upon him as a saint.