Altar of the Vows

In the chapel at the General House, in the entry on the right, one finds the altar commonly known as “altar of the vows.” 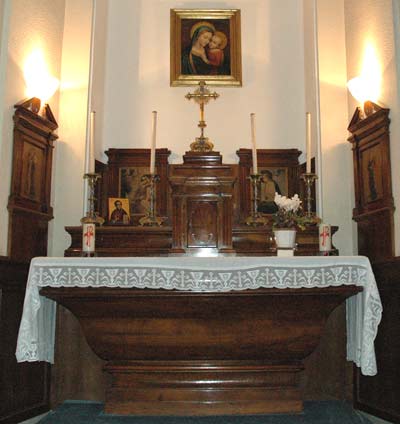 Altar of the Vows (Bucca).

History and Significance
This altar is the main altar of the church of the Missions at Aix, behind which Fathers de Mazenod and Tempier made their mutual vows of obedience on Holy Thursday of April 11, 1816.

October 29, 1880, the Oblates were driven out of their house and the church of the Mission was closed. This altar and the statue of the Blessed Virgin were transported to l’Enclos where three Oblates took refuge and then given the pastoral responsibility of Notre-Dame de la Seds by Bishop Forcade. The Oblates returned little by little to the house in Aix and Father Louis Boeffard, the superior from 1885 to 1888, brought the altar of the vows back there.

It is probable that the altar of the vows was transported to the general house when it was opened in 1933. It is certain that, after the war, it was found in a room on the ground floor, a room called “the General’s chapel,” because that is where Father Deschâtelets usually celebrated Mass. In the month of August, 1950, when the present General House was opened at via Aurelia 290, they transported to it the altar of the vows, the statue of the Blessed Virgin and the other souvenirs of the Founder.

The Event that the Altar Recalls
Around the altar top inscribed in gold letters are found the inscription: “Ante hoc altare votis se Deo Sacraverunt C. J. E. de Mazenod et H. F. Tempier protoparentes nostri, III Idus April. A. MDCCCXVI” (Missons, 1889, p. 286). Today, this inscription has given way to another engraved on copper on the right side of the altar-piece and written in French reads: “Altar of the first vows, Aix, Holy Thursday, April 11, 1816.”

We now know with certitude that Fathers de Mazenod and Tempier made reciprocal vows of obedience at the time. The first document we have on this subject comes to us from de Memoires of the Founder which Father Rambert cites without giving a date for it. “My set idea was always that our little family was to consecrate itself to God and to the service of the Church through religious vows […] I broached the subject with […] Father Tempier whom I had chosen for my director and who had taken me for his. He was delighted with this suggestion which corresponded to his own thinking and Mr. Tempier and I agreed to follow up on this project […] In short, Father Tempier and I judged that we should no longer delay and on Holy Thursday (April 11, 1816), both of us taking our places under the scaffolding of the fine repository that we had set up on the main altar of the church of the Mission, during the night hours of that holy day, we made our vows with a joy we could not express. We delighted in our happiness through that whole beautiful night in the presence of Our Lord” (RAMBERT, Vie de Mgr Mazenod…, I, 1883, p. 187)

Further on, Rambert specifies that the three vows of religious life were involved here (ibid, p. 188) But in his retreat made at Aix in May of 1818, Father de Mazenod wrote word for word: “I saw the life of religious perfection, the observance of the evangelical counsels free from the difficulties I had hitherto found in them. I asked myself why, to the vows of chastity and obedience that I have made up to now, I did not add that of poverty, and running through my mind the various obligations that evangelical poverty would entail, there were none that make me draw back…” (Oblate Writings, I, vol. 15, no. 145, p. 145)

According to what Father Tempier remembers, he and Father de Mazenod only made a mutual vow of obedience at this point. On the occasion of his celebration in 1860, while he was superior of the scholasticate at Montolivet we read in the April 2 issue of Sanctuaire, the scholastics newsletter: “Father de Mazenod and Father Tempier resolved to make a vow of obedience which would make them turn and turn about superior and subject to each other. They vowed mutual obedience. On April 11, 1816, the house chapel witnessed a heart-warming scene…” (Missions, 1938, p. 93) The same explanation is found in Father Tempier’s obituary written by Father Joseph Fabre who knew Father Tempier well from 1842 until his death in 1870. (Notices nécrologiques O.M.I., vol. II, p. 49)

Father Rambert’s version of things has often been followed by Oblate writers. However, it is clear that the altar of vows is a reminder of the mutual vow of obedience made by Fathers de Mazenod and Tempier on Holy Thursday, April 11, 1816. According to Father Bernad, it was before this same altar that, on All Saints day of 1818, the first solemn vow ceremony of the Missionaries of Provence took place. (BERNAD, M., Mgr de Mazenod, 1913, p. 43)