Among the Missionaries of France who preached the great mission of Marseilles in 1820 along with the Missionaries of Provence, there was Father Jean-Baptiste Loewenbruck (1795-1876), native of the diocese of Metz. On that occasion he got to know Father Eugene de Mazenod who, when he was the bishop of Marseilles, often asked him to come and preach in his diocese and named him an honorary canon.

In 1827-1828, Loewenbruck collabor­ated with Abbé Antonio Rosmini in founding the Institute of Charity and was superior of the community established in the abbey of Tamié in Savoy. Rosmini handed the abbey over to the diocese of Chambery when Loewenbruck left the society in 1838. Loewenbruck suggested to Bishop de Mazenod that the Oblates should establish the Oblates in Tamié, but the archbishop, Bishop A. Martinet, did not want to accept any French missionaries.

Canon Loewenbruck then preached throughout France and took up residence at Angers. In 1860, he wanted to ensure the continuation of his works by offering Bishop de Mazenod one of the properties called “the Angels” on the north of Segré, some fifty kilometers from Angers. Bishop G. L. Louis Angebault, bishop of that diocese from 1842 to 1869 was happy to welcome the Oblates but found the fact that they were so far removed from his episcopal city hard to accept. He suggested that Canon Loewenbruck should receive them instead at his house in Angers called “the Causeway,” in the Saint Jacques suburb. Canon Loewenbruck accepted and handed his properties over to the Congregation in July of 1860 and reserved for himself only the use of one apartment. He remained there until his death, a table companion of the Oblates.

The Oblates at Angers from 1860 up until the Expulsion of 1903
Residences: From 1860 to 1879, the community resided in Canon Loewenbruck’s house in the suburb of Saint Jacques on the edge of the city on the old road to Nantes. In 1865-1866, they had a chapel built as a wing of the house. A second wing was added before 1895 to receive the novices. 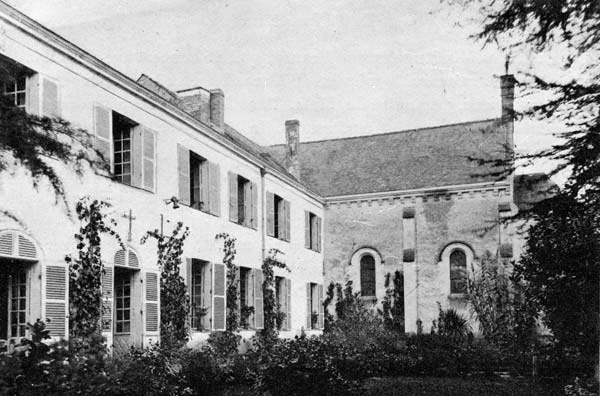 In 1879, the Oblates bought the house of the Auxiliary Sisters, situated on one of the most pleasant sites of the city on Toussaint street, near the cathedral and the railway station. The community remained at this property for only one year because they were driven from at the beginning of November, 1880.

After the expulsion of 1880, the fathers and brothers quickly withdrew to the Saint Jacques suburb where they resided until 1903. The house on Toussaint street was rented out to some nuns who run a very popular day school there.

The works: This house soon became the apostolic community par excellence of the province Nord. In the 1905 Missions O.M.I., p. 14, we read: “It was the model house with many works going on, with a easygoing and comfortable atmosphere where we liked to send the young priests just beginning their ministry.” As of September of 1860, the community was set up under the direction of Father Soullier. The bishop had just established perpetual adoration of the Blessed Sacrament in the diocese. He asked the Oblates to preach three days of retreat in the parishes before days of adoration were held. During the first six months of their stay in Angers, the priests preached 70 triduum or retreats and a few missions. From that time on, they were continually in demand.

We know the list of works and details of the missions and retreats from the reports published almost annually in Missions O.M.I. Father Marius Roux, who was superior of the missionaries for almost twenty-five years, himself wrote about fifteen reports that amount to 225 pages in print. He is the one, moreover, who was the most high profile Oblate in the diocese. Bishop Charles Émile Freppel, Bishop of Angers from 1870 to 1891, dubbed him “the evangelist of Anjou” and often said that the Oblates were his best missionaries. In 1865, Father Roux had already written that they enjoyed the esteem and acceptance of the clergy in the dioceses of Angers and Laval. “The requests for retreats and missions has not slackened off, in spite of the large number of religious congregations,” he added.

Activities lessened immediately after the war of 1870. In a report to the 1873 General Chapter (Missions, 1873, p. 293-312), Father Marc de L’Hermite, the provincial, observed that “the apostolic life of this house in the regions of Anjou and Maine had its periods of brilliance. It is less active today. The war, frequent changes in the superiors and missionaries, and especially, we have to admit it, the growing lack of personnel explain this downturn.”

The expulsions of 1880, however, did not diminish the requests for ministry. On the occasion of the 25th anniversary of the foundation of this house, Father Roux could draw up an impressive list as follows: 304 parish missions, 25 Lenten series, 17 months of Mary, 154 retreats to nuns, 238 First Communion retreats, 271 Easter retreats, 351 three day retreats in preparation for a day of perpetual adoration, for an average of 55 ministerial engagements per year.

A few brothers and one priest remained in the house especially during the period from June to November while the other priests were scattered about in the parishes. The priest who kept the house did not remain inactive either since several works were associated with the house. From the time of the arrival of the Oblates, the bishop asked them to provide a chaplain for the local poor house where there were one hundred and fifty old men in residence. In a report written by Father Delpeuch in 1873, we see that the priest in who kept the house was also chaplain to an orphanage and celebrated Mass in a chapel which was closed to the public from 1880 to 1889. For about ten years toward the end of the 19th century, one priest was chaplain at Nazarath House run by about fifty nuns of the Good Shepherd who housed three hundred girls. As well, another Oblate was chaplain of a residence run by the Sisters of the Holy Family near the sea coast at Pornichet in the diocese of Nantes.

The novitiate (1895-1903): At the time of the foundation of the German province in 1895, the province Nord handed over to that province the house of Saint Gerlach in Holland and the novitiate came to install itself with the missionaries at Angers, at the confines of Maine and Britanny, an area rich in vocations. This novitiate, always under the direction of Father J. L. Abhervé, boasted an annual average of twenty-five scholastic novices right up to the year of the expulsion, 1903. The novices subsequently took refuge in Bestin, where for seven years already a second novitiate had been opened specifically for Belgium.

The House of Angers from 1903 to 1972
We find very little information about the history of this house in the 20th century. In 1903, not only did the state expel all members of the non-authorized – that is, almost the totality – religious men and women, but they siezed their property as well.

The priests who remained in France initially lived scattered about and exercised their ministry under the cover of being diocesan priests as if they were part of the diocesan clergy. It seems that a number of them continued to preach. After the war of 1914-1918, they succeeded in buying back the house on Toussaint street near the cathedral, a house from which they had been expelled in 1880. They were still there in 1926. It is there that they celebrated the centennial of the approbation of the Congregation (Missions, 1926, p. 467-508). The house at Angers reappears in the Personnels from 1933 to 1967. The superiors were Fathers M. Grimaud, J. Lejeune, D. Bamdé, Jean de la Gorce, G. Monnin, G. Thibeaut and A. Pronost. After the 1939-1945 war, about ten priests were in residence there and continually preached parish missions and retreats. This ministry held first place among the works of the Oblates of province Nord, which in 1947 had 40 missionaries among its members and 60 missionaries in 1966. In a few years, this very fruitful ministry dried up. The six houses of missionaries of province Nord whose names appeared in the 1967 Personnel, no longer appear under this title in the Personnel of 1973. The house of Angers was canonically suppressed in 1972.

« Anger, FrançoisAnnals of the Propagation of the Faith »