Ferdinando Anzalone was born in Tortorici, Sicily, April 1, 1886. When, in 1892, he wanted to enter the basic course at Bellon college, this experimental juniorate, born of the heart more than the mind, was closed. Therefore, this well-bred boy did his first high school years with the private teachers who had previously prepared his sisters for pedagogical studies. From there he joined his cousin Vincenzo and other boys of his region on the mainland who were progressing under the dynamic teaching of Father Gaetano Destro at Villa del Drago in Rome. He completed his secondary education there.

November 11, 1902, after a new revolutionary wave by the French government that sanctioned the separation of Church and State, the novitiate of Notre-Dame de l’Osier was transferred to the priory at Saint-Pierre d’Aosta. He was sent there from Rome with his fellow countryman, Rosario Gentile. After the year of probation under the strict leadership of Father Ernest Neyroud, he pronounced his first vows on November 27, 1903. He then proceeded to the scholasticate in Rome and attended courses in philosophy and theology at the Gregorian University, where he obtained his doctorate in theology. In 1905 he made his perpetual vows in Roviano at the country house built for the scholastics’ vacations. He was ordained in Roviano in 1908 by Bishop Augustin Dontenwill, then Superior General. It was to this former archbishop of Vancouver, Canada that he wrote asking for an obedience for Manitoba.

Father Anzalone left Via Vittorino da Feltre for North America, where he began to serve Italian immigrants; this mission was interrupted by the First World War but resumed later with even greater zeal.

He returned to Italy to do his military service which he had postponed until he was twenty-six because of his studies. He stayed at Maddaloni and devoted himself to preaching, especially parish missions, in a holy and generous emulation with his superior and countryman Father Salvatore Loppolo. Suddenly stricken with a thyroid illness, this man who had a radiant complexion and a certain corpulence found himself with bulging eyes, white as a sheet and thin as a broomstick. He vomited everything he ate and in no time, there was but a shadow of the man. He spent a few months in his family hoping to recover. Supported by an extraordinary will to live, he improved enough to return to his community. But, unable to work, he asked to leave an atmosphere that had become obsessive. He wanted to return to America to take up again the adventure of his youth, confident of regaining his strength, which in fact he did.

Father Anzalone’s first thought was to return to Winnipeg where, on October 15, 1913, he witnessed with satisfaction the inauguration of a church for the religious service of the two hundred Italian families entrusted to his care. Since the bishop was not an Oblate but a member of the diocesan clergy, he thought of going down to a warmer region. He got himself invited to New Orleans, Louisiana for Lent by Father Carmelo Gagliardoni, a scholasticate companion and a native of Umbria, who had arrived in the country some twenty years earlier. But he did not think he could adapt to a world still composed of cowboys. So, he went to New York to one of his sisters who lived on the opposite bank of the Hudson, in the expectation that, in the state of New Jersey, he would be offered a position in the ministry he longed for. In the district of Palisades Park he discovered a shed that had been the church of a good group of Italians from the Province of Molise, left in the lurch by a pastor with little interest in his flock. The bishop had no intention to replace him. He had decided instead to suppress the parish. Father Anzalone managed to ingratiate himself with Bishop Walsh, who decided to keep the parish. After two years of efforts, the new priest entered the shed church, renovated the rectory and began his ministry. He seemed to have rediscovered his missionary work among the poor but humble and worthy areas of Abruzzo and Molise, even though sometimes instead of calling him Anzalone, they called him Lazzarone (scoundrel). 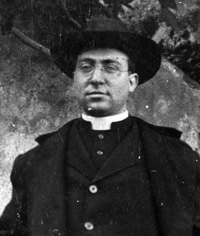 His friend, Father Giuseppe Ferrecchia, was sent from Italy to help him. This well-matched tandem set to work with renewed vigor. Father Anzalone, who spoke excellent English, began caring for the youth and Father Ferrecchia, with his innate gifts to reproduce the various dialects and patiently endure difficult situations, served the adults and seniors. They did valuable work which, on the one hand, led to the construction of a new brick church dedicated to Saint Nicolas, and on the other, in addition to the spiritual benefits, supported the still precarious finances of the new Italian Province. The considerable sums of money were the fruit of a ministry carried out everywhere, and at hours that others used for weekly rest, and also from the sacrifices of a very modest standard of living. The funds went to the houses of formation and towards the end of the war made it possible to consider the foundation of a house in Florence. In April 1942, on the eve of purchasing the Laugier villa, Father Anzalone was traveling by car. His vehicle ran off the road, hit a tree and he was killed. It is not known whether it was because he was overcome by drowsiness or because of some other reason.

Father Anzalone had the brilliant gifts of an orator, a singer, and a conscientious financier that were at the service of an impulsive and generous character, even to the point of total exhaustion of his strength. He was also a man filled with a supernatural spirit, open to dialogue with God (he knew the psalms of the Breviary by heart). He related well with his colleagues and with everyone, agnostics, Jews and Freemasons. He was also gruff and even rude, out of love for the truth, but in charity.