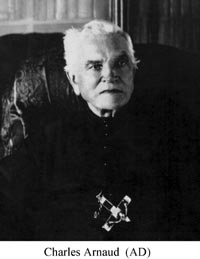 Charles Arnaud studied in France at the Petit Séminaire de Sainte-Garde in Saint-Didier-les-Bains from 1837 to 1842, and then entered the Oblate juniorate of Notre-Dame de Lumières. He was a novice in Notre-Dame-de-l’Osier in 1845 and took his final vows in 1846. After a year of theology at the Grand Séminaire de Marseille, he was sent to Lower Canada, where he quickly finished his studies in Longueuil. He was ordained priest in Bytown (Ottawa) by Bishop Joseph Bruno Guigues on 1April1849.

Father Arnaud then began his career as a missionary among the native people, a career he had longed for as a student. The Oblates, who had come to Montreal in 1841, in 1844 had accepted the request of Archbishop Joseph Signay of Quebec to preach the gospel to the Indians in his diocese. They undertook to work on three fronts at once: among the Montagnais of the Saguenay and the north shore of the Saint Lawrence, the Algonkins of the Temiskaming region, and the Têtes-de-Boules (Attikameks) of the Saint-Maurice. Since the departure of the Jesuits and Récollets in the 1760s, these missions had been without resident priests and were served only by a few secular clergy who went there in the summer. In 1849 Arnaud journeyed to Fort Albany (Ont.), on James Bay, with Father Nicolas Laverlochère; afterwards he was sent to Grande-Baie in the Saguenay, to tend the Montagnais missions in this area and on the north shore of the StLawrence. Because Grande-Baie was too far from the centre of the Montagnais population, in 1852 Arnaud moved to Les Escoumins, 24 miles northeast of Tadoussac, where Father Louis Babel joined him the following year. The missionaries annually visited the main gathering places and some of the posts in between.

In 1862 Arnaud left Les Escoumins for Betsiamites, where the Province of Canada had established a reserve for the Montagnais the previous year. They had made repeated representations to the commissioner of crown lands to have Father Arnaud come and live among them. Nicknamed “the Capital of Indian Country,” Betsiamites was the meeting place for native people in the summer, and few whites went to it. Arnaud had erected a chapel there, and he undertook to build a presbytery. The chapel, one of the largest and most beautiful on the north shore, was decorated with oil paintings, which impressed the Indians. Betsiamites would be Arnaud’s home until 1911. From it he tried to make contact with as many native groups as possible, for the north-shore missionaries wanted to extend their work to the farthest limits of Labrador and establish a permanent residence there. Arnaud had already endeavoured several times to reach the Naskapi. His attempts to found a mission in Baie des Esquimaux (Hamilton Inlet) in 1853, 1855, and 1858 had ended in failure: he had been shipwrecked, had lost his supplies in the rapids, or had had guides who pretended not to know the way.

During the 1870s the Oblates considered going to Ungava Bay to meet the Inuit. Arnaud made an initial journey there in 1872. He left on 21August aboard the Hudson’s Bay Company steamer Labrador and arrived on 8September. By 2November he was back in Sept-Îles. The first missionary to go to Fort Chimo (Kuujjuaq, Que.), he realized that the time had not yet come to make his home among the Inuit, for they were difficult to reach and the missionaries did not have the necessary financial resources.

Back in Betsiamites, Arnaud continued to visit and organize missions, teach and preach the gospel to the Indians along the Gulf of StLawrence, and attend to their welfare. His instruction was not confined to religion. He taught the Montagnais in Betsiamites to read and gave them singing lessons. He also encouraged their spirit of charity. At the time of the great fire in Quebec in 1866, for example, they sent $300 to the victims. Arnaud was on the lookout for anything that might improve the material and intellectual state of his flock. He overcame many difficulties to master the Montagnais language and wrote a French-Montagnais dictionary, which is still in manu form, as well as instructions in that language, which have also been preserved. A naturalist and poet on occasion, he marvelled at the beauties of nature in his kingdom of Betsiamites, and took a particular interest in birds. He even learned taxidermy. Over 40 years he gradually built up a collection of stuffed animals and organized a fairly large museum that would later be housed at the University of Ottawa.

Like all his fellow Oblates on the north shore, Arnaud had travelled a great deal. He was often the first European to cross certain lakes and mountains with canoes and gear, overcoming extreme difficulties. He built a number of churches and presbyteries, including a large residence in Pointe-Bleue. His travel diaries, which are rich in observations and deions of the regions he visited, are an original and irreplaceable documentary source for the specialist and the student of native history.

Arnaud’s kindness, gentleness, all-consuming zeal, joie de vivre, and exemplary piety had soon earned him the admiration and love of the Montagnais, who once paid him the compliment of saying, “You are very handsome… like a Montagnais!” During his 62 years among them, Arnaud left only once, in 1890, to visit his family in France. He was soon overcome by homesickness. “I prefer my dear Montagnais to all the splendours of Paris,” he said, and hurried back.

Although Arnaud claimed he had not had to suffer, he might have said, with Father François de Crespieul, a Jesuit who had carried on his ministry in the same territory two centuries earlier, “The life of a Montagnais missionary is a long and slow martyrdom.” It was not so much his physical suffering as the harassment he experienced from BishopJean Langevin of Rimouski and Mgr. François-Xavier Bossé, the prefect apostolic of the Gulf of StLawrence, that had aroused his impatience and indignation. The diocesan authorities accused him of keeping the revenues of the diocese for himself, of letting sick people die without the last rites, of careless record-keeping, and of not heeding episcopal edicts. He defended himself vigorously against these accusations. The Oblates were even threatened with being replaced by another congregation.

Finally, in 1910, the Oblates reached an agreement with Bishop Gustave Blanche, the vicar apostolic of the Gulf of Saint Lawrence, to transfer responsibility for the north shore missions to the Eudists. In 1911, with a heavy heart, Arnaud– the man who would be called the king of Betsiamites, the legendary apostle of the north shore, the idol of the Montagnais, the giant of the missions, and the towering figure of the region – had to leave Betsiamites for Pointe-Bleue, where he died three years later at the age of 88.

In 1948, out of consideration for Father Arnaud, who no doubt would have preferred to end his life among his dear protégés, and to the great joy of the Montagnais, Bishop Napoléon Alexandre Labrie of the Gulf of Saint Lawrence and Bishop Georges-Arthur Mélançon of Chicoutimi had the remains of fathers Arnaud and Babel returned to Betsiamites. To perpetuate Arnaud’s memory, his name was given to a township and a lake on the north shore, a bridge in Chicoutimi, and a street in Quebec. A plaque in his honour was put up in Betsiamites by the provincial government.