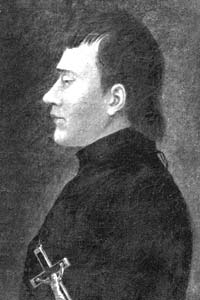 Victor Antoine Arnoux was born in Gap, January 22, 1804. We know that he had a few brothers and at least one sister, a nun whose name in religion was Mother Saint-Victor. He made his First Holy Communion at thirteen years of age on June 1, 1816 and then enrolled himself in the Confraternity of the Holy Trinity. He loved solitude and, in his spare time, showed skill working at carpentry, doing lathe work, plastering, making small devotional articles, especially crosses and rosaries.

He was a brilliant student at the college of Gap. On September 14, 1821, Alphonse Coulin, a scholastic brother at Notre-Dame du Laus wrote: “Arnoux from Gap whom we are daily awaiting carried off all the prizes in classical studies.” An Oblate of Notre-Dame du Laus paid a visit to the college and Victor decided to become a missionary. He began his novitiate on December 25, 1821 and made his oblation at Aix on November 4, 1823. In the month of July 1822, Coulin wrote to the Founder that “Arnoux is lacking in self-assertiveness; his shyness hides his talents. He has acquitted himself well of his duties.”

At Aix, where he arrived along with the novices at the end of 1822, Victor carried out the duties of sacristan and, along with his confreres, went every day to follow courses in theology at the major seminary. He was ordained to the priesthood by Bishop Fortuné de Mazenod on September 3, 1826. He exercised his priestly ministry for less than two years. Father Courtès wrote: “We are, no doubt, sorry that the chronic state of ill health and the sufferings of our saint and the too brief duration of his life did not allow him to carry out all the works of mercy and charity his priestly heart devised. But, he, at least, did everything he was able to do and beyond. And his zeal did not remain without fruit. Testimony is unanimous concerning the effectiveness of Father Arnoux work. They entrusted to him the direction of the novices and he made them fervent. He was sent to evangelize the rural population and sinners were brought to conversion at the sound of his voice. If he gave a talk in an educational institution, the youth listened to him attentively, with respect, with edification, convinced as they were that they were listening to and seeing a saint in action. At the college in Aix, where it was his special duty to hear the confessions of the children who had not yet received their First Holy Communion, he won the respect of the students and of the teachers. And the college principal, Mr. Marius Tupin, communicated to the superior of the mission his most genuine satisfaction with the choice of a co-worker who was an angel in piety and gentleness. In the hospitals, no sick person was able to resist the charm of his words…”

His illness (tuberculosis) drained his strength more and more. He was sent to Fuveau for a period of time because the air was healthier at Fuveau. He returned to Aix to die on July 13, 1828 with his mother at his bedside, accompanied by the entire community to recite the rosary for him. Father de Mazenod was not warned in time and he rebuked the superior for this oversight: “Do you not know that I regard it as a principal duty to assist all those of my brothers who are in danger of death and within reach of me?” (Letters to the Oblates of France, 1826-1830, Oblate Writings vol. 7, no. 307, p. 163) In a July 21 letter to Bishop Philibert de Brouillard, Bishop of Grenoble, he wrote that this young priest died “in an odour of sanctity. The upsurge of waves of public veneration arose so quickly and was so widespread that we had to hand over his cassock to save his priestly vestments and even some parts of his body that the people’s devotion did not spare.” The 29th day of that month, he told Father Guibert and his confreres at Nîmes about the death of “our blessed Father Arnoux, model of all the virtues, heroic in observance of the Rule, as spiritual as he was holy, has gone to take possession of Heaven at the age of twenty-four years and five months, leaving us as desolate over his loss as we are edified by his coming amongst us.” (Letters to the Oblates of France, 1826-1830, Oblate Writings vol. 7, no. 308, p. 164)

On March 29, 1829, Father de Mazenod asked Father Courtès to “to undertake to write down a short biography of our Fr. Arnoux, not in an oratorical but in an historical style; the smallest details are of interest in view of edifying the family.” (Letters to the Oblates of France, 1826-1830 Oblate Writings vol. 7, no. 326, p. 178) The superior of Aix obeyed, but in his own way. He wrote a 58 page obituary, but he did the opposite of what the Founder had asked of him. He wrote in the “grand oratorical style,” with very few historical details. He wrote a treatise on the religious as obedient, poor and chaste and on the greatness of the priesthood, but with few precise details about the life of Father Arnoux. However, let us turn our attention to this paragraph of the obituary: “Indeed, without knowing it, he influenced all his confreres by a powerful edification, the likes of which are few and far between. When we were in the presence of the young saint, it was impossible to escape the influence of his virtues, not to become more attentive and fervent in prayer, more recollected in chapel and during the celebration to Holy Mass, more mortified at meals, more religious in observing silence and all the preions of the Rule, in a word, more interior and more enthusiastic for everything that had to do with the service of God and the perfection of the spiritual life. Let us call to mind once again the fine testimony offered to Father Arnoux by one of his confreres: ”We used to call him the Saint. When we came into his presence, we felt obliged to speak of the things of God. We felt that talking about anything else would have been out of place.”

The remains of Father Victor Arnoux were laid to rest in the vault of the Oblates in the cemetery at Aix.

Father Arnoux's dossier in the Oblate General Archives contains his oblation formula of November 4, 1823 and of July 13, 1826 and a copy of a letter written from Nîmes by Father Honorat dated January 6, 1829, telling of a healing attributed to the intercession of Father Arnoux.
Courtès, H., “Notice du père Arnoux, ” 58 pages handwritten, published in Notices nécrologiques, vol. VII, pp. 5-74.