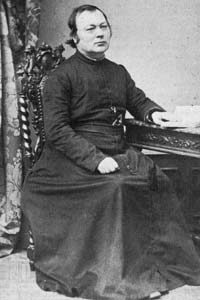 Joseph Pierre Blaise, born in Digne, France, on February 3, 1814, son of Jean Joseph Louis Pierre Aubert, a merchant, and Laure-Modeste Castellan, entered the Oblate novitiate in Billens, Switzerland, on November 1, 1830. He made his perpetual profession there on November 1, 1831 and was ordained a priest in Marseille, France, on December 25, 1836, by Bishop Charles-Joseph-Eugène de Mazenod, co-adjutor of Marseille and founder of the Oblates. A preacher in Aix-en-Provence from 1834, Father Aubert became director of the Notre-Dame de Lumières juniorate in Goult, Vaucluse, in 1840, and kept this position until 1844.

That same year, at the suggestion of Father Joseph Bruno Guigues, who had just been appointed superior of the Oblates in Canada, Father Aubert was sent to Canada with him. He devoted himself to preaching, with residence in Longueuil, Lower Canada, until 1845. At that time, Bishop Joseph Norbert Provencher of the Red River Colony (Manitoba), who needed priests to develop the works of his diocese, approached Father Guigues for help from the Oblates. Faced with the latter’s hesitations, because of the scarcity of subjects, Bishop de Mazenod appointed Father Aubert superior and founder of the first Oblate mission in Saint-Boniface. He thus became, with Father Alexandre-Antonin Taché, who was to accompany him, one of the first two Oblates to be sent to the West.

The missionaries left Lachine on June 25, 1845 and arrived in Saint-Boniface on August 25. Father Aubert was then appointed parish priest of St. Boniface Cathedral and Vicar General, positions he would hold for five years. He immediately began studying the Ojibwa language under the direction of Father Georges Antoine Bellecourt, and then in 1846 stayed in Wabassimong (Whitedog, Ontario), where he would return the following year. He found that the Ojibwa were absolutely ignorant and reluctant to hear about religion and to see priests. He agreed with Bishop Provencher that “less ploughing and a little more catechism” would have been more beneficial. The mission was soon abandoned. Father Aubert also visited Lac La Pluie (Ontario) in 1847 but was not much more successful there.

It seems that Bishop Provencher, who found him to have an excellent character and consulted him on major problems, such as the appointment of Louis-François Laflèche as coadjutor bishop of Red River, thought of Aubert as his successor. However, due to opposition from the Hudson Bay Company, it was not possible to think of “foreigners as bishops”.

Father Aubert left the West in 1850 and, until 1857, resided at the bishop’s house in Bytown (Ottawa), where he was Vicar General from 1851 to 1856, Superior of the bishop’s house from 1854 to 1857 and Chaplain of the Grey Nuns of the Cross (today the Sisters of Charity of Ottawa) from 1855 to 1857. It was in this last capacity that he worked on the constitution of the community. Appointed Superior of the House of St. Peter the Apostle of Montreal in 1857, Father Aubert acted as the theologian of the Most Reverend Ignace Bourget, Bishop of Montreal, at the Third Provincial Council, held in Quebec City in 1863. With the encouragement of the bishop, he was one of the first contributors to the Canadian Review, in which in 1864 he published an essay on rationalism. He became ill and returned to France in 1865 where he became superior of the sanctuary of Notre-Dame de Lumières. Elected assistant to the Superior General two years later, he remained in Paris until his death. As an assistant, Father Aubert was a prudent advisor and intermediary between the Superior General and the Canadian authorities. No major decisions were made without consulting him. He was particularly interested in the works of the Oblates in Canada and the question of the Papal Zouaves. In 1870, Father Aubert accompanied Bishop Guigues to the Vatican Council as a theologian.