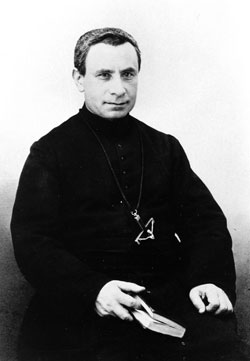 Cassien Augier, was attracted to the Oblates by his brother Celestine. He began his studies at the Holy Family Institute, in Marseille, and continued them at the juniorate of Notre-Dame de Lumières (Vaucluse) when it re-opened after a hiatus of a few years. He did his ecclesiastical studies at the scholasticate in Autun.

The young Oblate’s first assignment was to the Major Seminary of Ajaccio. In 1877, after a brief stay in Aix-en-Provence as a missionary, Father Augier became one of the chaplains at the Sacred Heart of Jesus of Montmartre, recently accepted by the Oblates. In 1881, he left Montmartre for Rome, where he served as Procurator of the Congregation to the Holy See and founded the scholasticate. From 1883 to 1885, he oversaw the construction of a large building (at 5 via Vittorino da Feltre) which could properly house the ever-increasing group of scholastics. This building welcomed the General Administration in 1905.

The year 1890 brought Father Augier back to Paris to the General House as fourth assistant on the General Council. (He would be 3rd assistant in 1893 and 2nd in 1894). He visited several houses in Europe. Long tours of the missions in 1894 take him to the Vicariate of Natal, the Orange Free State and the Transvaal, with the special task of seeing to the organization of the new Apostolic Prefecture of Basutoland. In 1896 – 1897, he was charged with the foundations in Australia and the Vicariates of Jaffna and Colombo. Within the General Administration, he was responsible especially for Oblate vocation recruiting, which led him to found, in 1891, Les Petites Annales de la Congrégation des Missionnaires Oblats de Marie Immaculée; he was its director until his appointment as Superior General. In addition, he was editor of the Missions de la Congrégation des Missionnaires Oblats de Marie Immaculée (1890-1898).

On May 19, 1898, the General Chapter elected Fr. Cassien Augier Superior General on the first ballot almost unanimously (37 of 42 votes cast). He was 53 years old and in good health.

Under his leadership there were significant developments in the Congregation. The foundations in Australia became a Mission Vicariate (1900); with the explicit encouragement of Leo XIII, missions were opened in Wales with the Welsh themselves (1900); the immense Vicariate of Athabaska-Mackenzie was divided into two vicariates (1901); the Vicariate of the Saint Boniface missions, whose works were becoming stable and strong, was elevated to the status of province under the name of Province of Manitoba (1904); a second province was erected in the United States, covering the southern part of the country (1904); given the importance of the work of the National Vow of Belgium to the Sacred Heart of Jesus, which had been entrusted to the care of the Oblates, a province was erected in Belgium (1905); and finally, in 1906, the missionaries of the lower Cimbebasie (Windhoek) received the of the civil authorities to work among the natives. On the other hand, the Southern Africa missions, although very active, had only a very small missionary staff and the vicariates of the Transvaal and the Orange Free State had passed through the ordeal of the Boers War (1899-1902).

Even in Europe at the beginning of his term as General, Father Augier was present to the Oblates: he visited the houses in France, England, Germany, Belgium, Italy and Spain; He took part in events that brought Oblates together. In 1900, he got the approval of the Supreme Pontiff for a scapular of the Sacred Heart of Jesus, intended at the same time to honor the Blessed Virgin under the title of Mother of Mercy and he received the mission of spreading the devotion. He presided over the construction and the inauguration, in 1900, of the beautiful chapel dedicated to Our Lady of Lourdes, attached to the General House. Finally, at head of a group of several Oblates he took part in the celebrations of the fiftieth anniversary of the definition of the dogma of the Immaculate Conception that was celebrated solemnly in St. Peter’s in Rome, on December 8, 1904.

The administration of Father Augier was darkened by the dispersal of the Oblates of France under the blow of a law adopted in Paris in 1901 that persecuted religious. This law, ordering the dispersal of religious members of civilly unapproved Congregations and the liquidation of their assets, was put into effect in 1903-1904. Father Augier did his best to safeguard religious life among the scattered Oblates and to lessen the material losses as much as possible. He had to move the General House from Paris to Liège, in 1904, and then to Rome, in 1905. The foreign missions that still depended much on France for missionaries and material resources were affected by this.

The ever-growing needs for financial resources for the General administration determined the Treasurer General, supported by the Superior General, to engage in certain financial operations that far from profitable, lead to substantial losses. Compromised by these bad deals and deprived of the support of his assistants on the General Council, Father Augier, consulted the Holy See and was permitted to resign from the office of Superior General, on January 24, 1906. He retired to Santa Maria a Vico, in Maddaloni, then later definitely in Naples. He was chaplain for the Sisters of Hope (Holy Family of Bordeaux) and carried on a ministry well appreciated by the Neapolitans out of their chapel. Because of his work and his influence, the Province of Italy considered him a distinguished benefactor.

Father Augier gave of himself generously during his life in the service of the Congregation that he loved. This was evident in the warm fraternal charity and generous dedication that characterized his life even after his resignation as Superior General under circumstances that were particularly difficult for him. He was a man with a big heart, talent and piety, and a modest attitude. During his time as General, the number of Oblates increased from 1,427 to 1,917 (in 1907).