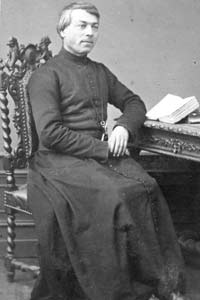 Pierre Avignon was born at Mende on April 10 1834. After his secondary studies at the college of Mende, he entered the novitiate of Notre-Dame de l’Osier on October 7, 1853. Father Vandenberghe who was novice master “had serious doubts” for a long time about the vocation of this novice and prolonged his novitiate by several months. In the official record it is usually written: beginning of novitiate July 1, 1854 and oblation July 2, 1855. In the June 1855 report of the General Council, we read: “In the most recent past, he so successfully corrected the faults pointed out to him, he conducted himself with such regularity and such a strong attachment to the Congregation the reverend Father [novice master] no longer has any doubts as to his vocation.”

He studied philosophy and theology at Montolivet from 1855 to 1860. In his reports, Father Mouchette, moderator of scholastics, always judged in a very positive light this candidate which he found “regular in observance and assiduously attentive to this duties.” He saw him as one who “manifests a serious interior life and gravity in his external comportment and an assiduous application for his own improvement.” From 1857 on, he was often ill and went to spend his vacations with his family in 1857, 1858 and 1859. He was ordained to the priesthood by Bishop de Mazenod on June 24, 1860.

From his letters and from what is written about him in Missions, we know exactly what his obediences were. They always sent him to the same three houses: Notre-Dame de Bon Secours (1860-1863; 1878-1897), Notre-Dame de l’Osier (1864-1867; 1869-1878; 1897-1899), Le Calvaire in Marseilles (1867-1869; 1899-1919) Father Avignon was superior only once. That was at Bon Secours from 1878-1883. Everywhere he served in the role of treasurer. In 1902 in Missions (p. 402), they wrote about him: “Father Avignon will soon have been an Oblate for half a century and local bursar for 42 years. He received his first obedience to be treasurer on the day of his ordination at the hands of Bishop de Mazenod. Father Avignon is a wise man. No one better than he can spot at first glance the weaknesses of a projected budget and right off can point out the energetic remedial measures that need to be taken.” At l’Osier, he was parish priest as well and at Bon Secours, he took pastoral charge of the pilgrims. Concerning his activities as parish priest in the 1877 Missions (p. 26) they wrote in his regard: “Rev. Father Avignon appointed for the second time as parish priest of l’Osier in 1870, ran the parish with the kind of zeal and piety which is his trademark. I would especially point out the care he lavished on the sick. His self-denial and his pastoral charity was boundless. Also his task is sometimes one of the most taxing, especially in our harsh winter months. In addition, during the year of 1875, on the occasion of several jubilees, he readily offered us a most energetic and most appreciated assistance. This worthy priest is filled with zeal for everything which concerns the spiritual demands of his holy ministry. I do not know of any parish in the diocese which is more abundantly supplied with religious help of every kind: preaching, confraternities, pious works, etc. The Propagation of the Faith and the association of the Holy Childhood among others are excellently well organized. Rev. Father Avignon’s excellent and well organized flair for conducting ceremonies and setting up temporary altars, his magnificent voice add the greatest splendor to our celebrations during pilgrimages…”

In the Registry  for Personnel in 1862, it is stated that Father Avignon has “little talent for preaching.” Nevertheless, in spite of his many occupations, he preached several retreats and missions each year in several civil departments where the priests of province of Midi worked: La Lozère, Gard, Ardèche, Isère and especially Vivarais. In La Semaine religieuse de Marseille in 1919 (p. 555) we find a short article about Father Avignon in which it is written: In the Vivarais, “There is perhaps no parish which cannot recall having seen him with his fine Saint Jerome like stature and heard the rumbling thunder of his voice, so well suited to recall the great truths […] The expulsions of 1903 found Rev. Father Avignon in residence at Marseilles,” we read in this article. “At that time, although his advanced age prevented him from engaging in preaching, he devoted the final years of his life to spiritual direction in several nuns’ communities and, for fourteen years, he was the highly esteemed chaplain of the Sisters of Saint Charles on Saint-Savourin street. Along with the zeal of an apostle, what best characterized this worthy son of Bishop de Mazenod was his perfectly regular observance during his 65 years of religious life. Towards the end, when he could hardly set foot outside his room, but in total possession of his faculties, he had set for himself a hermit’s rule, so punctilious and at the same time so wise, that he did not have, he stated, one minute’s time to be bored and that he found his days too short. That is how he prepared himself for death. And when, on the feast of Saint Joseph, death found him, this man who, in turn, had guarded and promoted the growth of Jesus Christ in the souls of others, it did not come in its usual attire of ugliness and anguish. Without spending one day in bed on account of illness and almost without any suffering, he expired” May 7, 1919.