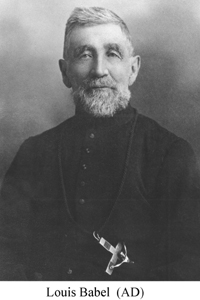 After attending school in Fribourg and Mélan, Switzerland, Louis Babel entered the novitiate of Notre-Dame de l’Osier in France on 4May 1847. He made his final vows on 8May 1848 and then undertook theological studies, first in Marseilles, and from 1849 to 1851 in Maryvale, near Birmingham, England. He was sent to Canada in 1851 and was ordained to the priesthood in Bytown (Ottawa) by Bishop Joseph Bruno Guigues on 27July 1851.

At Father Babel’s request, his superiors assigned him to the mission among the Montagnais. Stationed initially at Grande-Baie in the Saguenay region of Lower Canada, he was sent in 1853 to Les Escoumins. There he met Father Charles Arnaud, who was to be his companion in evangelism for almost 60 years. Because of his robust health, zeal, and facility with languages, Babel was ideally suited for the arduous work awaiting him in these regions. Every year the two missionaries would cover more than 1,560 miles on foot or by canoe to reach their flock, which included both whites and Indians scattered along the north shore of the StLawrence from the mouth of the Saguenay to Tête-à-la-Baleine. In the opinion of Abbé Roger Boily, who replaced them in 1862, Babel and Arnaud had done a remarkable job. He noted: “On arriving in Les Escoumins, I found a population well disposed to continue putting into practice the good lessons taught by the reverend Oblate fathers […] How, indeed, could one not become attached to such worthy missionaries? Their virtues, their piety, and especially their zeal could not fail to draw even the most rebellious hearts.”

It was a hard blow for Babel when in the summer of 1862 his superiors sent him from Les Escoumins to Notre-Dame-du-Désert (Maniwaki), rather than to Betsiamites, the new centre of the Montagnais mission. The transfer was made because of his administrative talents. Although he no longer had to brave the perils of the sea, he had to learn a new native language, Algonkin, and become familiar with all the trades, including those of bursar, builder, and farmer.

Babel stayed among the Algonkin only four years, however. In 1866 he rejoined Arnaud at Betsiamites, where he remained until 1911. In addition to working among the Montagnais, he played a major role in the Oblates’ missionary efforts. For many years Bishop Charles-François Baillargeon of Quebec and the Oblates had dreamed of reaching the Naskapis in the interior of Labrador, and, if possible, the Inuit. Arnaud had already made several attempts, but without success. In 1866 Babel was assigned the task of setting up a mission among the Naskapis in Baie-des-Esquimaux (Hamilton Inlet), some 1,250 miles from Quebec. This arm of the sea extends inland about 50 miles, and the Hudson’s Bay Company had a post in the interior at Rigolet. Babel left Quebec on 30April 1866 for Mingan, where he was to board the company’s steamship. However, the ship did not show up and on 18July he set out for the bay with two men by an overland route. They encountered many obstacles. “There is nothing but mountains, swamps, and lakes jumbled together,” he wrote, and the travellers were constantly attacked by swarms of mosquitoes. They finally reached Winokapau, an Hudson’s Bay Company post more than 500 miles from Mingan, where they planned to replenish their supplies. But the post was deserted and Babel’s two companions refused to go on. He had no choice but to return to Mingan. Arriving on 29August he gave this account: “The journey that I have just finished was made under the most unfavourable conditions; 1. I had only one capable man, the other was a scrofulous youth of 16 or 17 […] ; 2. Neither of them knowing the way, and having only a hastily drawn Indian map to go by, we lost considerable time around a number of lakes, in order to find the entrance to the portages; 3. My tent and many of my effects, as well as my canoe, were too heavy […] 4. […] in 43 days of walking, we had 27 rainy days […] 5. The total want of supplies for half of the return journey.”

In spite of these difficulties, Babel was not discouraged. Strengthened by his experience, he undertook to go to Baie-des-Esquimaux the following year. On 9July 1867 he left Mingan, this time aboard the Hudson’s Bay Company steamship. When he got to Rigolet he met some Inuit, but found that they were all Protestants full of prejudice against Roman Catholic priests. He pushed farther inland to North West River, about 90 miles [145 km] from Rigolet. Here, after two weeks, he baptized 15 adults and 7 children. He then headed west towards Lake Petitsikapau, where there were many Naskapi. He spent three days there, baptized a few children, and set out once more, along with two men, in the direction of Mingan. He covered more than 500 miles in 33 days of dreadful weather, with companions who were on the verge of leaving him at any moment, long portages (sometimes in more than a foot of snow), and insufficient supplies. He got back on 19October.

In 1868 Babel went to Baie-des-Esquimaux for what would be the last time. On his next two journeys, in 1869 and 1870, he was unable to travel so far. Every year thereafter until 1889 he visited the missions along the north shore of the StLawrence. From 1890, because of his age, he would undertake no more long expeditions.

His attempts to preach the gospel to the Naskapis and Inuit made Babel, indirectly, the first scientific explorer of northeastern Quebec. A tireless chronicler, a meticulous observer, and a well-informed scientist, he was the first to report iron ore in what was to become New Quebec. His deions of lakes, rivers, rapids, and portages, his meticulous observations on the nature of the soil and the forest, and his constant reporting on climatic and meteorological conditions make his travel journals of particular scientific value. During his 1868 journey, for instance, he used the Rochon telescope, also called the telescope for measuring distances, to give brief deions of the places he visited, and he provided copious and detailed data about the size of the lakes, the direction in which the rivers flowed, the length of the portages, and the direction and velocity of the winds, taking care to add the time at which he made these observations. In 1873 the Quebec Department of Crown Lands published a large map based on his data, the first one to describe the interior of Labrador. It would prove a reliable and valuable scientific guide for both missionaries and explorers. Babel’s contribution to the knowledge of native languages also deserves mention. He was the author of a French-Montagnais dictionary, which is still in manu form, and wrote notes that were to be used in preparing a Montagnais grammar.

Babel is remembered as a great missionary because of his total dedication to the evangelization and welfare of the aboriginal peoples, and as a model religious because of his self-sacrifice, courage, detachment, and promptness in carrying out the difficult tasks assigned to him. Unlike Father Arnaud, who was known for his gentleness, Babel was stern, uncommunicative, and rough-mannered. These traits created many problems for him in his relations with colleagues and church members, and earned him the nickname given him by the Montagnais, Ka Kushkueltitak, “he who meditates.” 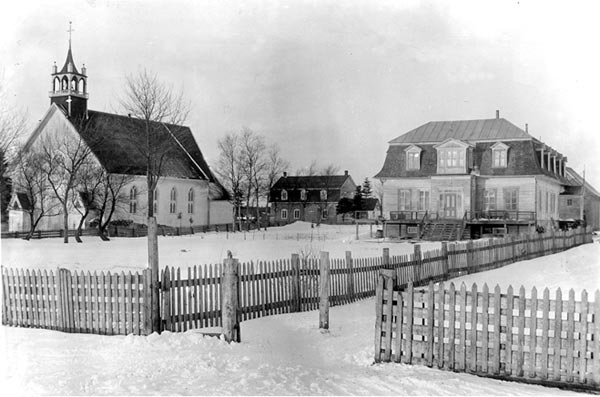 Father Babel would never see his native village of Veyrier again. After 60 years of missionary work, mainly among the Montagnais, he ended his days in Pointe-Bleue. In 1948 his remains, as well as those of Arnaud, were brought to Betsiamites. A monument was erected to his memory in Schefferville in 1970, and his name was given to a township in the Saguenay region and a mountain in the region of Lake Plétipi.