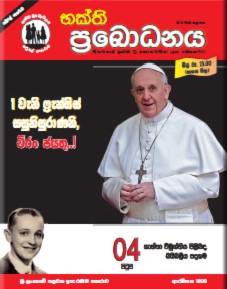 The Magazine “Bakthi Prabodanaya” (Spiritual Renewal” in Sinhala) was started in 1989 with the intention of disseminating the word of God in Sri Lanka. In an era, when the Christian writers were few, our Oblate Missionaries began the ministry of the printed word at St. Vincent’s Home, Maggona, one of our pioneer Religious Houses. The Religious Superior of St. Vincent’s Home at that time was Revd. Fr. Charles Conrad, OMI The monthly magazine had humble beginnings. The first issues in January; 1899 was limited to 8 pages and only 2000 copies were printed. The first editor was a layman, Gurunanselage Marshal Ferdinandez of Maggona, a school teacher and a Sinhala scholar. He passed on the editorship to the Oblate Fathers and Brothers, who continued the publication of this magazine. At a time when Catholic Sinhala publications were very few in Sri Lanka it was a credit to the Oblate Congregation for the initiative taken by the Oblates to pioneer a Catholic Family Magazine which has been regularly published over the past century. At present (1994) it comes out with 36 pages as a monthly magazine with a circulation of 85005 copies.

Being a Catholic family magazine in Sri Lanka, it was the primary concern of the magazine to inculcate Christian family values and thereby enrich family spirit. But it has also been sensitive to the current events and issues that draw the attention of its readers. Over the years the magazine therefore has also become an organ of public opinion, a voice against all kinds of evil in the social, cultural, political, economic and even in religious spheres with a view to guide the faithful into the green pastures of truth, justice and peace. It also touches on Sri Lanka’s recent happening against the background of political upheaval, ethnic violence, youth unrest as well as the problem of poverty and social justice in Sri Lanka. The motto of the Oblates commits the members to be specially concerned about the poor.

In presenting these deeper Christian topics, the following features appear very regularly in the magazine:

– An instructive and thought provoking editorial,

– Interviews with Knowledgeable people on current events and themes,

Through all these, the magazine aims at building up positive convictions in the individual and families and to draw the society away from mythical and exaggerated superstitions. The Editorial Staff of the magazine feels that it has been successful in achieving this goal among its readers- The magazine is also read more and more by non-Christians and occasionally they contribute articles to the magazine.