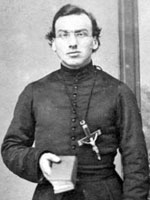 Jean-Baptiste Balland was born at La Houssière in the diocese of Saint Dié on August 7, 1834. He began his novitiate at Notre-Dame de l’Osier on July 15, 18 55 and made his oblation there on August 15, 1856. He spent the next two years at the scholasticate of Montolivet. In his reports, Father Mouchette, moderator of the scholastics judged this brother “generally good and regular,” but “with a native tendency to timidity, lacking courage in his prayer life, whence a tendency to scrupulosity.” In 1858, Brother Balland began spitting blood and the doctor could see no remedy for it. He was sent back to live with his family. In this regard, Father Mouchette wrote: “This is a loss because, in spite of his over-delicate conscience, this brother does have zeal. He showed this in the prison cells where he used to go so readily to evangelize the wretch detainees. Died at Nancy on June 27 with all the signs of one predestined.”