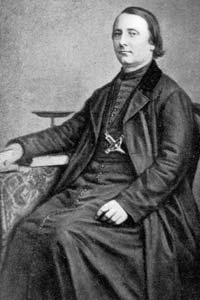 Charles Baret was born at Avignon on August 2, 1825, the fourth child in a family of seven children. The first two boys became Oblate priests and two of the girls became nuns. He attended the school run by the Brothers until the age of ten. At that time, he received his First Holy Communion and entered the minor seminary of Avignon where he shone academically. After a year of philosophy at the major seminary at Avignon, he entered the novitiate at Notre-Dame de l’Osier on August 14, 1842. There to welcome him was his professor of music from the minor seminary Pierre Nicolas; he too was a novice. After his oblation on August 15, 1843, he went to study at the major seminary of Marseilles where he joined the community of Oblate scholastic brothers.

A musician and poet with a great gift for languages, he then learned English and Italian from his Irish and Italian confreres, not to mention Hebrew and Greek. Nonetheless, during his three years of theology, he struggled with the monotony of the regimented life of pious exercises. He subsequently wrote to his brother, Victor, in 1861 about “classes in the morning, classes at night, always class matter to learn, texts to recite by heart. This fixed and unchanging systemic uniformity stultifies and disgusts one’s imagination. But, dear friend, life, whatever it may hold, will not stand the test of a cross examination directed and conducted by the imagination. What frightens and disgusts the lunatic in residence is precisely what a calm and enlightened intelligence relishes. Great lives were always made up of a monotonous existence. Genius, like holiness, will always be found on the beaten barren paths…”

It was during his scholasticate that Charles Baret composed the oblation hymn that Oblates everywhere sang one whole century through:

I leave behind this muck and mire
To so many hearts it has profaned.
Had I control of this world’s power
This gift at your feet I would lay.

In the summer of 1846, he followed the course on preaching given by Father AmbroiseVincens at Parménie. Still too young to be ordained, he was appointed professor of philosophy at Notre-Dame de l’Osier in 1846-1847, then at Notre-Dame de Lumières and at Le Calvaire in 1847-1848. In this regard, Father Joseph Fabre wrote: “The young professor would have relished making intellectual jaunts beyond the classical bounds of his subject and have launched his students into exploring greater depths where his own intelligence would have felt quite comfortable, but where they could never have followed him.” We have an October 16, 1847 letter from Father Henry Tempier in which he urges professor Baret to follow the manual written by Bouvier and to not to disparage it before his students, the first year scholastic brothers: “It is a main blunder,” he explained,” I have seen many professors make with regard to an author they were using. It seems as if they thought that by criticizing the author, they enhanced their own personal worth by making themselves disdainful and stupid critics of a work the tenth of which they themselves could never have authored.”

Ordination and Obediences
Charles Baret was ordained to the priesthood by Bishop de Mazenod at Marseilles in the chapel of the Sisters of Refuge on March 18, 1848. After the summer vacations, he was sent as a mission preacher to the house at Limoges. But he spent very little time in each community to which he was sent because Bishop de Mazenod who dearly loved him and held him in even higher esteem as a preacher, sent him to all the new communities of mission preachers in order to make a good impression on the bishops who all wanted good preachers.

Father Baret stayed in Limoges from 1848 to 1852. He arrived with Father Charles Ferdinand Gondrand who had been ordained only one year. When Father Melchior Burfin saw his two young confreres arrive, he stated: “I asked for one seasoned mission preacher; they sent him to me in two volumes.”

In 1852, the unbecoming conduct of Fathers Alexandre Chaine and Jules Piot damaged the reputation of the Oblates in Nancy. The Founder sent Father Baret there. In a November 19, 1852 letter, he wrote to Father Baret: “It is up to you, dear son, to restore our reputation, compromised in the eyes of those who see clearly and to edify the Brothers by a great regularity, winning them over at the same time by your likeable personality.” (Oblate Writings I, vol. 11, no. 1124, p. 106-107)

On September 27, 1853, Bishop de Mazenod summoned Father Baret to Marseilles “to take on a ministry which is important and which calls for a person who is reliable.” It seems he simply wanted to send him to preach in some of the important parishes of the Midi. While Father Baret was in Marseilles, Bishop J. E. de Mosquera, the archbishop of Santa Fe de Bogota, who was passing through the city, died on December 10. On the occasion of the funeral, celebrated December 14, Father Baret was chosen to deliver the funeral oration. It was of such note that the journal, l’Univers, reproduced it word for word in its pages.

Father Baret spent a few months at Notre-Dame de Cléry at the beginning of 1854 where he was sent “to shed some light into that part of the country.” Then, he made a long retreat at Notre-Dame de l’Osier from July to September. When the scholasticate of Montolivet began its academic year, he was appointed dogma professor for the year 1854-1855. He then became part of the staff at the house in Talence and preached in the Bordelais from 1855 to 1859. The Founder wrote to him rather regularly letters filled with affection but in which he invariably remembered to offer him sound advice. For example, we read this in a November 9, 1856 letter: “One more thing I recommend to you is that, when returning to the community after the most brilliant ministry, you immediately live in the most exact observance of the Rule, in the practice of virtues of religion, so as to conform yourself well to the spirit of our vocation which wants us to be apostles on the outside and in a certain sense recluses in our communities in order to devote ourselves therein to study and to our personal sanctification.” (Oblate Writings I, vol. 12, no. 1331, p. 28)

In July of 1859, Father Baret left Talence for Paris where, with Father Jean Joseph Magnan, he was to found a new Oblate house. He remained there until 1862. He preached in the capital city, but was also involved in the construction of the house on Saint Petersburg Street that became the General House in 1862. Then, he was superior of the Oblate house in Nancy from 1862 to 1865. From 1865 to 1868, he lived in the house in Aix and preached in the Midi. In 1868, he was appointed superior of the Oblate community of Notre-Dame de la Garde. It was in virtue of being superior of this community that he traveled to Rome and then to Lourdes in 1872 in the company of two members of the church vestiary.

Illness and Death
In 1875, Father Baret’s health began to decline rapidly from liver ailments with cancerous complications. Nevertheless, he preached a lenten series at the church of Saint Adrian in Marseilles. During the summer, he went to undergo treatment at the mineral springs at Vals in the Ardèche and stopped to see his sisters in Lyon. On September 12, Father Ferdinand Bénédic gave him the Sacrament of the Sick. He died in the Oblate house of Notre-Dame de la Garde on November 2 at fifty years of age. On November 4, his funeral rites were celebrated in the church of Le Calvaire. He body was laid to rest in the funeral vault of the Oblates in the cemetery of Saint Pierre in Marseilles.

Father Charles Baret took part in few parish missions. He preached especially advent and Lenten series and eulogies of the saints in the cathedrals and the great churches of many cities in France. He was greatly appreciated as a musician and composed a number of musical pieces. Father Marcel Bernad gives a list of them in his work Bibliographie de Missionnaires Oblats de M. I., Liège, 1922. Father Bernad also mentions Father Baret’s diary and some forty handwritten sermons, but nothing of that has been preserved in the archives of the General House.

Oblate General Archives in Rome. His dossier is made up of six file folders: one with his poetry and other letters: 4 to Father Joseph Fabre, 5 to Father Gondrand, 25 to Father Bénédic, 25 to his four sisters, about 150 to his brother Victor. We have preserved the originals or copies of 27 letters written by Bishop de Mazenod to Father Baret, some twenty letters written about him in 1875 and some notes by Father Bovis entitled, Le R. P. Baret à Notre-Dame de la Garde, 20 p. His name appears in some hundred letters from fifteen Oblates, his contemporaries, and often in the review Missions O.M.I., especially with regard to his terms as superior at Nancy and Notre-Dame de la Garde.
Circular letter no. 79 from Father Fabre, Paris, January 25, 1876 in N otices nécrologiques, vol. III, Paris, 1879, p. 109-252.
GONDRAND, Charles, Ferdinand, Le R. P. Baret, Bar-le-Duc, 15 pages and in Missions, 1876, p. 111-123.
RICARD, Antoine, Souvenirs du clergé marseillais au XIXe siècle, Marseilles, 1881, p. 405-415: Charles Baret, o.m.i.