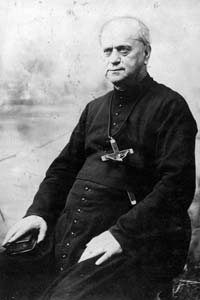 Jean-Baptiste Bartet was born at Cessey-sur-Tille in the diocese of Dijon on May 21, 1835. After a few months of theology at the major seminary of Langres, he began his novitiate at Nancy on January 5, 1857 and made his oblation at Montolivet on June 24, 1858. At the novitiate, the master of novices found a number of faults in him, but also some good qualities. He recommended him for oblation by sending him to Marseilles at the beginning of 1858.

At Montolivet, initially, Father Mouchette, moderator of scholastics, judged scholastic brother Bartet in a positive light, but he then found many faults in him. In his reports, he wrote: “1858, Bartet made his oblation with great joy and with very good dispositions. There is still something frivolous in his character; 1859, good will, desire to do well, but frivolous and inconsistent, bad habit of a heart that feels empty and because of that ill at ease, often enough in a kind of state of listlessness… Sent away on September 2 because of his nosiness and his gossiping which caused harm to the others and compromised everyone.”

In the fall of 1859, it seems Jean-Baptiste Bartet spent a few months with the Jesuits, but begged Father Mouchette to readmit him to the scholasticate. He did, in fact, return on February 12, 1860, finished his scholasticate and was ordained to the priesthood by Bishop de Mazenod on September 22.

He was initially sent to teach at the church school of Vico in 1860-1861, then at Talence where, it seems, he remained until 1866. In the Personnel Register 1862-1863, under his name was written: “Above average talent and aptitude for pulpit ministry.” He did indeed spend a great part of his life preaching retreats and missions. His name appeared a few times in the review Missions O.M.I.

From these few references, we know that he was part of the Nancy community in 1868-1869, those of Angers, of Tours, then of Saint-Jean of Autun. From 1877 to 1915, he resided at Le Calvaire in Marseilles with the exception of three years at Notre-Dame de la Garde (1882-1885) after the Oblates were expelled from Le Calvaire.

When he is mentioned in Missions, the parishes where he preached are enumerated without making any kind of a judgment on his qualities as a preacher, except for when he preached a retreat at the shtine of Notre-Dame de l’Osier in September of 1878. The superior wrote that “it was perhaps the finest retreat we have seen in the last twenty years.” In Missions of 1902, it is stated that he was “diligent in carrying out the ceremonies and in the confessional where he did an immense amount of good to a very numerous clientele.” (p. 402) He died at Marseilles on April 16 at 80 years of age.