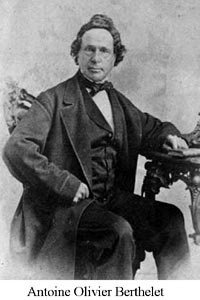 Antoine Olivier Berthelet was born in Montreal on May 25, 1798, the son of Marguerite Viger and Pierre Berthelet, medical doctor. After having finished his studies at Montreal College, he launched into a business career. He bought a lot of properties in East Montreal, which he later sold at a profit.

A rich man, he was generous and gave large sums to educational and charitable institutions. A friend of Father Léonard, in 1842, he gave the Oblates one of his houses in Longueuil. As a mark of appreciation, Bishop de Mazenod wrote him a letter granting him a share in the privileges and merits of the sacrifices, prayers and good works of the Oblates.

Mr. Berthelet was the elected representative for Montreal-East for the period 1832-1834. He died on September 25, 1872. His remains were laid to rest in the cemetery of the mother house of the Sisters of Charity of Montreal.