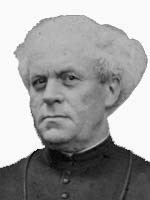 Louis Bessac was born at Orange, diocese of Avignon on June 16, 1830. He made his secondary studies at the minor seminary and one year of theology at the major seminary of Avignon. He entered the novitiate of Notre-Dame de l’Osier on May 9, 1853 and made his oblation there on May 10, 1854. Father Vandenberghe, the master of novices, commended him to the General Administration in these words: “Brother Bessac is an excellent candidate who will never at all be a source of problems. Good hearted, regular observance, prayerful, he has always been a model for his confreres whose affection he has known how to win. He is not brimming with enthusiasm, but he is endowed with a sense of the upright, and then too, he is so docile! He reveals his inner self with simplicity. He knows how to sacrifice himself and will do so without any fuss. I am confident that the will make a good religious.”

He studied theology at Montolivet from 1854 to 1857. In his reports, Father Mouchette, the moderator of scholastics, always judged him favorably; he found him “very good, regular in his observance,” but a bit meticulous and exaggerating the dangers of the ministry. Bishop de Mazenod ordained him to the priesthood on June 28, 1857.

At Marseilles, he often preached in the chapel at Le Calvaire, in the parishes and the convents of the city, but more especially, for twenty-two years, he was a prison chaplain: the women’s prison, the Présentines and the men’s prison on Chave avenue. In his obituary, we read: “He used to visit them often, giving them short exhortations suffused with faith and kindness and bringing many of them to confession. In addition to that, he strove to relieve their lot by offering them small commodities and money and a thousand little services a good heart knows how to devise. For the rest, in his personal interaction with them, he was always smiling, being a good listener, enjoying the game of pretending he was taken in by their self-serving lies. We should not be surprised that he was loved of his parishioners, that they were very happy when he visited them, that even many among the men asked to serve his Mass because they felt drawn to him because of his kindly appearance and great charity, not to mention the little gifts he made to those who served his Mass. The prison staff could only have for him the greatest esteem, giving him full liberty to carry out his ministry.”

It was on his way back from visiting some prisoners that he collapsed in the street, struck down by a stroke. He died two days later on November 28, 1900.