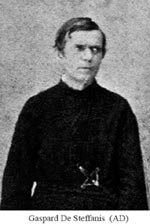 Gaspare de Steffanis was born in Montaldo Scarampi, diocese of Asti, Italy, on December 21, 1821. Having spent some years in the Cistercian abbey of Turin, he entered the novitiate in Notre-Dame de l’Osier on January 22, 1847 and there he took five-year vows before leaving for Ceylon on October 21, 1847. He travelled with Fathers Étienne Semeria, François Ciamin and Louis Keating. They arrived in Jaffna at the beginning of February 1848. On November 1, 1848 Brother De Steffanis made final vows in Jaffna where he was to spend the rest of his life.

From his first years in Ceylon, Father Semeria appreciated the services and the qualities of Brother De Steffanis and he made it known to Bishop de Mazenod. In a letter to Cardinal Fransoni, dated November 24, 1853, he wrote: “Father Lempfrit has arrived with a Brother, Cistercian like himself. This Brother is a little saint who is doing much good in the Ceylon mission.” In his report made in 1862, Bishop Semeria wrote: “Brother Gaspard De Steffanis continues with his holy patience to provide us with the most outstanding service in temporal matters.” In fact it was he who bought the land where the cathedral, the bishop’s house and the Holy Family convent stand today. As diocesan architect, he drew the plans and built the catechumenate, the Saint Vincent de Paul nursery and other buildings.

The Brother was a good-humoured person. On returning from a journey, on October 5, 1858, Father Bonjean wrote to Father Fabre, saying that he was happy to find “Brother Gaspard, whose pleasant and spiritual sayings made us forget the fatigue of our long journey that evening.” In a letter to Father Soullier, on December 28, 1877, the novice, Brother Charles Collin, wrote: “the speech-making would not have been complete without the improvised intervention of the Brother De Steffanis. This good Brother, while maintaining a serious face, had us laughing ourselves to tears while he spoke in a language of which only he knows the secret “de omni re scibili et nescibili; he has the gift of being able to give the French language a very special flavour by mixing ingredients borrowed from every nation: Italian, English, Tamil…” (Missions OMI, 16 (1878), p. 234).

Brother developed a serious form of jaundice in March 1878. He was sent to the orphanage in Colombogam where he died on November 18, having received the sacrament of the sick on the preceding October 21. In his report to the 1879 General Chapter, Bishop Bonjean wrote that there were two distributions of rice to the poor in Jaffna each week and he added: “Brother De Steffanis, who is sorely missed, did this distribution with a charity and prudence which only add to the intensity of the grief caused by his premature death among the whole population of Jaffna who came in crowds to his funeral.” (Missions OMI, 18 (1880), p. 24).