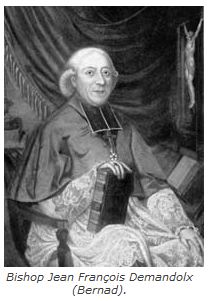 Jean-François Demandolx was born in Marseilles on October 20, 1744. Before the Revolution, he was vicar general for Bishop de Belloy, bishop of Marseilles with Abbé André de Mazenod, Eugene’s great-uncle. The de Mazenod family had links with his own. He refused to take the oath of allegiance to the Revolution and emigrated, first to Italy from where he went on to Germany. On the occasion of the Concordat of 1802, Bishop de Belloy called him back to his post as vicar general. Bishop de Belloy had become the archbishop of Paris. He was appointed Bishop of La Rochelle on February 2, 1803, then, on December 17, 1804, he was transferred to the see of Amiens, but only took possession of it on April 17, 1805. He attended the national council called by Napoleon on June 17, 1811 in Paris and there stood for the prerogatives of the Pope as opposed to the usurpations of the Emperor. He worked to resurrect his diocese from its state of ruin brought on by the Revolution both on the material and the spiritual levels. He died in Amiens on August 14, 1817 and was buried in the crypt of the cathedral. During the period of the Restauration, he readopted his noble title of de Mandolx.

His relationship with Abbé de Mazenod
Eugene had the occasion to contact the Demandolx family as soon as he returned to France in 1802. His great uncle André, who died in Venice in 1795, had made a loan to Pierre Louis Demandolx in 1786. Dominique Demandolx guaranteed repayment of this debt. The Mazenods of Palermo, André’s legitimate heirs, charged Eugene with the task of having this debt reimbursed. Since Pierre Louis Demandolx had died, Eugene negotiated with Dominique for repayment of this loan. But it seems, his efforts were in vain. In 1808, Eugene entered the seminary at Saint-Sulpice and made no more mention of this affair.

Abbé de Mazenod was ordained deacon on June 16, 1811 by Cardinal Fesch, the archbishop of Lyon. This bishop, who was Napoleon’s uncle, had come to Paris to attend the national council. Napoleon wanted to appoint his uncle archbishop of Paris, but Cardinal Fesch preferred to remain in Lyon. In his stead, Napoleon appointed Cardinal Maury. But Pius VII, interned at Savona, refused to give canonical recognition to all the bishops appointed by Napoleon. Maury had to be satisfied with governing the diocese of Paris in virtue of the powers granted to him by the chapter. He was considered an interloper.

Abbé de Mazenod, one of the masters of ceremony of the council, had the opportunity of meeting a number of bishops, among whom was Bishop Demandolx. He probably explained to him that, since he had been appointed a director of the seminary in the wake of the expulsion of the Sulpicians, he had yet to receive ordination to the priesthood. He had asked Cardinal Mattei to do so, but since Cardinal Mattei was a member of the “black” cardinals, he had to leave Paris. Since he did not want to be ordained by an “interloper,” he was looking for a bishop. Bishop Demandolx hastened to offer him his services. Abbé de Mazenod gratefully accepted his offer. However they had to be discreet in order not to reveal the real reasons behind this endeavor. Accordingly, Bishop Demandolx wrote Abbé de Mazenod a letter on November 25, 1811. In this letter, he urged him to visit him in Amiens and asked him to bring with him the dimissorial letters from the Bishop of Paris. He was delighted to be able to ordain the son of a family linked in friendship with his own family. “You owe me this favour, not only because of the longstanding bonds of friendship that unite our families, but also because of the friendship I felt for you from the moment I had the good fortune of making your acquaintance… Come, then, I urge you, if you possibly can and if you can bring me the dimissorial letters which allow you to request ordination from a bishop of your choice.” (REY I, p. 127)

Armed with this skilfully phrased invitation, without difficulty, Abbé de Mazenod obtained the dimissorial letters necessary to be ordained at Amiens. He arrived there on December 7 and took up lodging at the seminary. It was there he finished his retreat begun December 1 at Issy. Bishop Demandolx ordained him to the priesthood on December 21, 1811 in the cathedral. Impressed by the fervour and competence of the young priest, he offered him the post of vicar general. Already he saw in this young priest his successor in the see of Amiens. But Eugene was already committed to being a director of the seminary in the wake of the Sulpicians departure and he could not in conscience accept Bishop Demandolx’s offer. He travelled back to Paris where, at the beginning of January 1812, he began his work as director and master of ceremonies at the seminary of Saint-Sulpice.