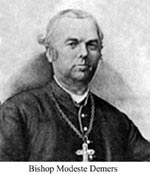 Modeste Demers was born in Saint-Nicolas-de-Lévis, Lower Canada, on October 11, 1809. After his seminary studies in Quebec, he was ordained to the priesthood by Bishop Joseph Signay on February 7, 1836. His first assignment was as assistant priest in Trois-Pistoles. In 1837 he was sent as a missionary to Saint-Boniface in Western Canada and then the following year to Oregon with Father Norman Blanchet, ministering to the French Canadians who were working with the Hudson Bay Company and also with the aim of evangelizing the Amerindians.

The two missionaries took up residence in Fort Vancouver in 1838-1839, and later in the area of Fort Willamette. From 1841 to 1843, Father Demers visited the Amerindians in Cowlitz, Fort Langley and along the banks of the Fraser River as far as Fort Alexandre and Fort George in New Caledonia (which became British Colombia in 1868). In the period 1844-1847 he was pastor in Oregon City. In 1846 Oregon was raised to the rank of an ecclesiastical province. Bishop Norbert Blanchet was appointed archbishop and Father Demers became Bishop of Vancouver Island and administrator of the dioceses of Queen Charlotte Islands and New Caledonia.

He was ordained bishop on November 30, 1847 and afterwards he travelled in Eastern Canada and in Europe in search of missionaries and money. He passed through Marseille in 1850. On October 29, 1852, he entered his diocese with a few priests and established his residence in the little town of Victoria where Father Honoré Lempfrit had been a missionary from 1849 to 1852. His co-operators did not remain long in the diocese, which at the time had about 2,000, baptized Amerindians (mostly children) and a few dozen Canadians scattered in the trading posts of the Hudson Bay Company. For some years the bishop remained alone in Victoria and he had a house and chapel built. These were completed in 1854. In order to keep himself occupied, he tilled a plot of land, repaired the watches of the Oregon missionaries and on Sundays he celebrated Mass and preached to the few faithful living in Victoria. He seems to have known Father Pascal Ricard who arrived in Oregon in September 1847. Between 1853 and 1856 he wrote 39 letters to him in Olympia. He expressed his joy at receiving some news sent to him by Father Ricard in the “hole” where he lived. He spoke very little about his apostolate, was very severe in his judgements of the Whites and Amerindians, explained his difficulties with the few priests who left him after scandalous episodes to go and work in California. From 1853 onwards he was counting on the Oblates to make a foundation on the island. He wrote to Bishop de Mazenod asking him for six priests but it was not until 1854 that he received a reply from Father Casimir Aubert. The letter promised that missionaries would be sent but only in a few years time. On June 11, 1854, Bishop Demers confided his disappointment to Father Ricard and he added that he would need missionaries as soon as possible in Fort Thompson (Kamloops) and in New Caledonia. “At the risk of being taken for a prophet,” he wrote, “that is where I believe there will be well-established missions.”

Father Ricard left Oregon at the beginning if 1857 and was replaced by Father Louis D’Herbomez. In 1858, Bishop de Mazenod received a pressing invitation from the Congregation of Propaganda Fide and decided to send missionaries to the diocese of Bishop Demers. The Oblates in Oregon considered them to be “the missions which offered the greatest hope of success in this vast country.” (letter of Father Casimir Aubert to Father François Bermond, February 8, 1858 and to D’Herbomez, April 20). During the summer of 1858, the Oblates took up residence in Esquimalt, not far from Victoria. In less than two years they had built two chapels, had exercised their ministry among the soldiers and the sailors of this military port and founded a college, which was transferred to Victoria in 1860. From 1859 onwards some of the priests had gone to the continent to evangelize the Amerindians along the banks of the Fraser River and they founded the mission of the Immaculate Conception near Lake Okanagan. In 1860-1861, Fathers Léon Fouquet, François Jayol and Paul Durieu visited the Amerindians on Vancouver Island.

In 1860 Bishop Demers announced that he wished to resign. The bishops of Canada and the United States put forward the name of Father Alexandre Trudeau, o.m.i., as his successor. Bishop de Mazenod was not opposed to the appointment but said that he would not give him any Oblates because this man had not shown great attachment to the Congregation (letter to Bishop Guigues, November 23, 1860). In 1861, Father Trudeau himself refused his appointment as bishop (letter of Father Tempier to Cardinal Barnabò, February 8, 1861).

n 1863, the diocese of Vancouver Island was divided and the apostolic vicariate of British Colombia was created and entrusted to the Oblates with Bishop D’Herbomez as the first vicar apostolic. In 1865, the Oblates left Vancouver Island. Bishop Demers continued as bishop but did very little work in his diocese. During the period 1866-1869 he travelled in South America, the United States and in France, still in search of priests and money. He was present at the Vatican Council in 1870 and returned to die in Victoria on July 21, 1876.

In an article on the establishment of the Catholic Church in British Colombia (L’implantation de l’Église catholique en Colombie-Britannique). Émilien Lamirande said that Father Demers had accepted with apprehension his appointment as bishop, and he added: “Trials multiplied, illness, the person of the first bishop of Vancouver Island took on the painful appearance which remained his trademark.”