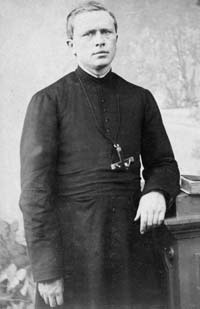 Henri D’Halluin was born at Quesnoy-sur-Deûle in the diocese of Cambrai on August 26, 1828. He began his novitiate at Montolivet on October 13, 1855 and made his oblation there on November 2, 1856. He did, however, spend several months of this novitiate at Notre-Dame de l’Osier and Father Vandenberghe wrote of him: “Bonus Israelita in quo dolus non est. [A worthy Israelite in whom there is no guile.] He is so good that almost the only ones he can stand are the good. You know his capabilities.” In presenting him to the General Council for vows in October of 1856, Father Mouchette wrote: “I must add that this brother is good, a man of prayer and observes the rule regularly. He loves his vocation and he has a rather refined manner. As for his abilities, the rock bottom basics is what we can demand of him. He has displayed a restless spirit, one that is mistrustful in some circumstances and even a certain stubbornness, but at the bottom of all that we can see that what is lacking is intelligence and judgment. I believe his fault must be attributed to his simple good-heartedness rather than to lack of virtue.”

Father Mouchette’s assessment hardly changed during the two years of Brother D’Halluin’s scholasticate. In his reports, among other things, he wrote: “1856, generally rather good, but always very dull-witted. His simpleness is an embarrassment; 1857, generally regular in his observance, but touchy, defiant, sometimes holding grudges; 1858, it would seem he will never be able to carry out the priestly ministry. In the diaconal exams, he shows little or no intelligence… Very regular in his observance, but always somewhat odd. He does not possess enough religious virtue and at times seems incompetent because of lack of judgment…”

In spite of these remarks that offered little reassurance, Brother D’Halluin was ordained to the priesthood by Bishop de Mazenod on June 27, 1858 and sent to Notre-Dame de la Garde where he remained for six years. In the Personnel Register of 1862-1863 we find written under his name: “From a well-to-do family, he received a good education. He is pleasing in appearance. He is not strong and has a genuine although not very clever prayer life. His intellectual endowment is very limited. He was only ordained to the priesthood on the condition that he would not engage in ministry. He accepted that condition. However, faculties were subsequently granted to him at Notre-Dame de la Garde. He had done a part of his studies at Saint Sulpice where he was judged a weak student. A character without influence and without strength.”

In 1864, Father D’Halluin received his obedience for Notre-Dame de l’Osier. He accepted his obedience with very bad grace and complained to Fathers Fabre, Tempier and Sardou. They tried to soothe him and Father Sardou acknowledged that the provincial had moved too quickly in moving Father D’Halluin from Notre-Dame de la Garde at a time of tension between the Oblates and Bishop Cruice.

He spent one year at Notre-Dame de l’Osier and Father Cumin, the superior, wrote that Father D’Halluin took part in the mission of Bizonnes. “Father D’Halluin, who for six years was chaplain at Notre-Dame de la Garde went through his first campaign in the Daupiné. I must give him very honorable mention for the eagerness he displayed in this instance. Constantly in the confessional, taking his turn in the pulpit, he rendered us valuable service while he at the same time he won general acceptance.”

From 1865 to 1869, he was in residence at Royaumont, then once again chaplain at Notre-Dame de la Garde from 1869 until the Oblates were expelled in 1903. In his report on this house in 1902, Father Bessières wrote: “Fathers D’Halluin and Marthon are two veterans, several times decorated, having to their credit, the former forty years and the latter twenty-five years of presence at the shrine.”

On the occasion of the expulsion in 1903, Father D’Halluin left Marseilles and went to live with his sister at Quesnoy-sur-Deûle. That is where he died on September 22, 1908 in his 84th year of life. A few fathers from Waregem attended his funeral and reported to the Superior General a few details on his brief illness and his death.

Oblate General Archives in Rome. Oblation formula Montolivet, November 2, 1856; a few papers concerning business affairs and one letter from a priest of Waregem to the Superior General, 1908. Forty-four letters from Father D’Halluin to Father Joseph Fabre (1864-1891) and a few letters to Fathers Rey, Sardou, Soullier, Tatin and Tempier.