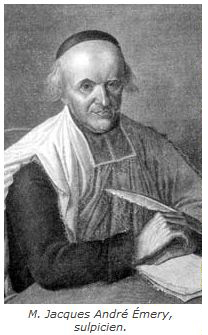 Abbé Jacques André Émery “the luminary of the Church of France” at the time of Napoleon I deserves an extensive biography. The parameters in which we must work in this publication constrains us to give only a brief summary of his life and his special relationship to Abbé de Mazenod.

His life and the initiatives he took to save the church of France
Jacques André Émery was born at Gex on August 26, 1832. While taking courses in theology at the Sorbonne, he spent several years at the seminary of Saint-Sulpice. Two of these years were spent at the Retreat, a kind of novitiate. He joined the Sulpicians in 1758. In 1781, he was elected as the ninth Superior General of Saint Sulpice, a post he held until his death on April 28, 1811. First of all, he reestablished order in the lax moral atmosphere that prevailed in the major seminary. In point of fact, the seminary’s population was made up mostly of young men of noble descent, young men more preoccupied with their noble descent than they were with their growth in the spiritual life.

Before the Revolution, Mr. Émery already found himself standing in the forefront of the political-religious scene. Bishop de Juigné, the archbishop of Paris, refused to take the oath of the civil constitution of 1790 and left France. Before leaving, he assigned Mr. Émery to govern the diocese of Paris in association with his two vicars general. To save France from undergoing de-christianisation, Mr. Émery took the oath of “equality and fraternity” (September 3, 1792), then that of “submission to the laws of the republic” (in 1795) and even of “hatred of royalty” (September 5, 1797). He advised the other members of the clergy to do the same, otherwise the parishes would be bereft of pastors and the dioceses of bishops. In spite of his conciliatory attitude, he was imprisoned during the Reign of Terror (1793-1794).

In spite of strong opposition from certain bishops living in exile, M. Émery emerged from the turmoil of the Revolution a man of heightened stature in the eyes of the church of France and of the Pope. A priest of charismatic personality, he would serve the Church yet again in the Napoleonic Era (1799-1811). A promoter of religious peace, he submitted to the December 28, 1799 decree which exacted from the ministers of public worship “a promise of fidelity” and the promise to use their influence to lead the rest of the French clergy to make this promise. He rejoiced when a concordat was concluded between Napoleon and Pius VII (July 15, 1801). This concordat effectively granted legal recognition to the Church from the regime born of the Revolution and gave the parishes and dioceses legal status. But the concordat contained nothing about the religious orders. Consequently, the major seminary of Paris as well as its country house at Issy was confiscated by the state. Mr. Émery lost no time in taking the initiative. In September 1800, he opened a house of formation on Saint-Jacques street in Paris. Then, in the wake of the Concordat in 1803, he opened the seminary on Notre-Dame-des-Champs street with forty seminarians. Finally, in 1804, he bought the house of the Daughters of Christian Instruction which was confiscated and sold during the Revolution. It was situated at the corner of Pot-de-Fer and Vaugirard. It was this building which housed the seminarians from 1804 to 1830.

In order to devote himself entirely to the task of directing the seminary, on three occasions, Mr. Émery refused three different appointments as bishop. In 1808, he was appointed as councilor of the University and, in 1809, he was appointed a member of the church council set up by Napoleon. In the disagreements between Pius VII and the Emperor, he stood steadfast on the side of the Pope. On June 13, 1810, a furious Napoleon ordered that Mr. Émery was to “cease immediately fulfilling any function.” Mr. Émery withdrew to a private home not far from the seminary. From there, he used to go to the seminary often to see what was going on. It was at the seminary of Saint-Sulpice that he surrendered his soul to God on April 28, 1811. He was buried in the Sulpician cemetery at Issy. Abbé de Mazenod, a confidante of Mr. Émery, gave us a spiritual portrait of the man: “The Company was raised from its ashes by the devotion of Mr. Émery, a very respected figure who, after battling with all the storms of the Revolution without succumbing, after saving the Catholic faith in France single-handed at a time when it was on the point of being totally proscribed anew, gave his life to the work of formation in the hope of raising young shoots in the Lord’s vineyard to fill the frightening number of vacant places death has left in the sanctuary. As he wanted to devote all his energies to this saintly task, he refused on various occasions three different dioceses that were offered him. His great piety, profound knowledge, wealth of experience, constituted this venerable old man the oracle of the Church of France. Proof against all and any private interest, his sole concern was for what was good, and without passion or prejudice he often found ways of achieving it where many other clever men had given up hope.” (Oblate Writings I, vol. 14, no. 71, p. 161 and 162) This judgment made one year before Mr. Émery’s death would also be the judgment of history.

His relations with Abbé de Mazenod
During his stay at the seminary of Saint-Sulpice, Abbé de Mazenod held in high esteem the intellectual, moral and human qualities of Mr. Émery. From the very beginning, that is, from the month of October in 1808, he was already strongly attached to him. Mr. Émery also held Abbé de Mazenod in high esteem and made him his confidante with regard to his endeavours on behalf of the Pope, imprisoned by Napoleon in Savona, Italy. Indeed, the Emperor not only annexed the Papal States, but even had the Pope removed from Rome to Savona in July of 1808. Pius VII responded to these vexations by a bull of excommunication. But Napoleon forbade its publication in France. Mr. Émery succeeded in getting his hands on a copy and had it transcribed by Abbé de Mazenod to have it subsequently distributed in France. From that time until June of 1810 when Napoleon forced Mr. Émery to leave the seminary, Eugene was a member of the committee dubbed the orium where in the greatest secrecy, documents issued by the Pope or certain cardinals were transcribed. They were then distributed throughout France by trustworthy individuals. If they were taken in flagrante delicto , these volunteer scribes were liable to very severe penalties.

At the peak of his glory, Napoleon wanted to have an heir. But his wife Josephine was sterile. It was for this reason that he requested the annulment of his marriage by the Paris bureaucracy. In view of the circumstances, the Paris bureaucracy could not refuse the decree of the all-powerful emperor. In a second marriage Napoleon subsequently took for his wife Marie-Louise of the house of Habsbourg. In a civil ceremony which took place on April 1, 1810 at Saint-Cloud the twenty-six cardinals present in Paris were in attendance. But such was not the case of the religious marriage celebrated the next day, April 2, in a hall of the Louvre set up as a chapel. One half, that is, thirteen cardinals did not make an appearance. They adhered to the Pope’s opinion that the annulment of such marriages was the exclusive right of the Holy See. Consequently, such a religious ceremony could not be celebrated. A furious Napoleon stripped the absent cardinals of their cardinal’s insignia and ordered them henceforth to wear only the black cassock. By this gesture, he deprived them of their resources and condemned them to want and misery. Abbé de Mazenod who spoke perfect Italian offered his services as a liaison person between Mr. Émery and these poor “black” cardinals. They strove to find benefactors for them to enable them to live decently according to their state in life.

Napoleon wanted to punish Mr. Émery for defending the Pope and refusing to cooperate with the Emperor in his projects designed to bring the Church under his despotic rule. In June of 1810, Mr. Émery received the order to leave the seminary. He found lodgings on Vaugirard street, not far from the seminary. He was replaced by Mr. Duclaux who became the tenth Superior General of the Company. He was so affected by the woes of the Church that he bemoaned them without ceasing. Struck down by serious illness, he was brought to the seminary for medical examination. From that moment on, Abbé de Mazenod in his role of infirmarian and confidante never left his side. Mr. Émery died, in a manner of speaking, in the arms of Eugene de Mazenod. Abbé de Mazenod pressed Mr. Duclaux to keep the heart of Mr. Émery at the seminary. His request was granted. Extraction of the heart was carried out by Dr. Laennec with the assistance of another doctor and in the presence of Abbé de Mazenod. The funeral was attended by a large number of prelates and a large crowd of the faithful. Abbé de Mazenod, in his role of master of ceremonies, oversaw the smooth proceedings of the funeral rites both at the church and the procession to the cemetery at Issy. Mr. Émery was buried in a vault close by the chapel of our Lady of Loreto.

Thirty years later in an August 29, 1842 letter to Mr. Faillon, Bishop de Mazenod allowed himself the pleasure of narrating his special relationship with Mr. Émery. “I was twenty-five when I entered the seminary and Father Émery always treated me as a man of mature judgment. He made it easy for me to approach him and through our close association I was able to appreciate not only his kindheartedness but also his deep wisdom, his keen discernment, his priestly virtues, and over and above all else, his love for the Church, which at this time was being so cruelly persecuted…. I used to drop into his room for a visit every day even if only for a moment and he always gave me a cordial reception. I don’t think he ever allowed anyone but myself to speak to him about his health of which he took very little care. Toward the end of his life a scab formed on the back of one of his legs as a result of a sore that had festered. Due to his rigorous spirit of penance, he used to find tearing the stocking away from where it adhered to the sore an ideal way to punish himself. He would listen to no one’s advice in this regard, nor would he consult any doctor about it. As a matter of fact I don’t think he ever consulted a doctor in his whole life. Out of deference to me, however, he agreed to let me wash the sore with what I seem to recall was quinquina; but not without first making a few good-natured quips about my pretensions at being a doctor. I took care to the good old man during his last days as a way of repaying him for the freedom with which he allowed me to approach him and speak openly to him like a son to a father.” (LEFLON, Jean, Eugene de Mazenod, vol. I, p. 309)