The St. Joseph Mission at Esquimalt, situated three kilometres west of Victoria, on Vancouver Island, was founded by Fr. Charles Pandosy in 1858. It was the first mission on Canadian soil west of the Rocky Mountains. For a long time, Bishop Modeste Demers, bishop of Victoria from 1846, had asked for Oblates. Fr. Louis D’Herbomez, Superior of the Oregon Oblates, sent him the first missionaries. These had left the diocese of Nesqually, because their missions had been destroyed in 1855 – 1858, during the war between the Americans and the Yakima and Cayouse tribes. 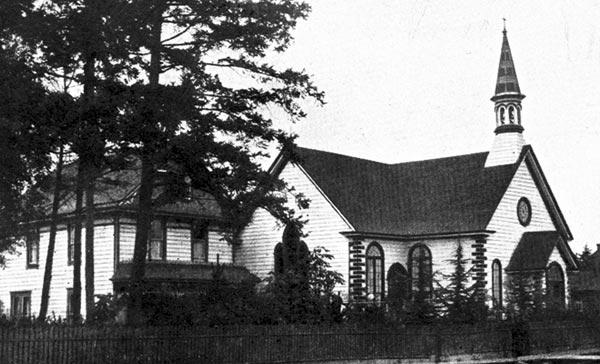 Within a few years, Bros. Gaspard Janin and Georges Blanchet, with Frs. Pandosy and Léon Fouquet, built a house, as well as two churches, one for the Whites and another for the Amerindians. They ministered to several hundred white people, and several thousand Indians of the area, as well as to sailors, since Esquimalt was an important port for the English fleet in the Pacific. Fr. D’Herbomez made this mission the vicariate centre until 1864. The Oblates also started St. Louis College, which was transferred to Victoria in 1860.

That year, Bishop Demers entrusted the Oblates with the evangelizing of the Indians of New Caledonia. This region became the Province of British Columbia in 1871, as part of the Canadian Confederation. This vast territory became an Apostolic Vicariate in 1863, with Bishop D’Herbomez as the first Vicar. In 1864, he chose New Westminster and in 1866, he recalled the Oblates from Esquimalt and Victoria. In the meantime, Frs. Casimir Chirouse, François Jayol, Jean-Marie LeJacq etc., had visited and made an initial contact with the Indians on the whole of Vancouver Island.

In his letters, the Founder often mentions Oregon, but very little about British Columbia. On February 4,1859, he writes to Fr. Augustin Gaudet in Texas: “Oregon, which extends to Vancouver and beyond, needs our prompt support”. On April 19,1860, he mentions to Fr. Henri Faraud in Athabaska: “Our Fathers from Oregon have gone up to Vancouver Island, and into New Caledonia” (British Columbia).