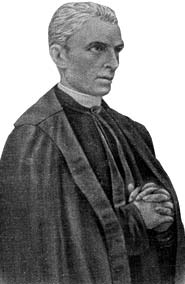 Born at La Mure in the diocese of Grenoble on February 4,1811, Pierre Julien became acquainted with the Oblates of Notre-Dame du Laus while on pilgrimage there in 1821 and 1824. In the course of a mission preached by the Oblates at La Mure in May of 1829, he met Father Guibert who sent him to Saint-Just near Marseilles where Pierre Julien took the habit on June 7. While following the exercises of the novitiate, he continued his secondary studies. He worked too hard, fell ill and was forced to leave the novitiate after five months. It was a few months after the sacrilege committed in the church of Saint-Théodore on March 10, 1829. The sacred vessels had been stolen and the hosts scattered about. Father de Mazenod, the vicar general, had had solemn expiatory ceremonies conducted and eucharistic devotion was very fervent in Marseilles and in the Oblate houses of formation. Later on, Father Eymard wrote: “It took Marseilles to give me an exclusive love of the Eucharist and to make of it the centre of my life.”

When Pierre returned home, his father died. He wanted to enter the seminary of Grenoble, but he needed a letter of recommendation to do so. Quite by chance, in September of 1831, he met Father de Mazenod who was passing through Grenoble. Father de Mazenod recommended him to the superior of the seminary where Pierre Julien studied until his ordination on July 20, 1834. He celebrated his first Mass at Notre-Dame de l’Osier on July 22. Father Toussaint Dassy, his classmate at the novitiate who was at l’Osier at the time, invited him to rejoin the Congregation, Abbé Eymard preferred to remain a member of the diocesan clergy and was named assistant priest in the parish of Chatte.

He joined the Marists in 1839 and remained a religious in that congregation until 1856. He left that congregation to found the Congregation of the Priests of the Blessed Sacrament. In 1858, Father Cuers, ordained to the priesthood in Marseilles on June 24, 1855 and first companion of Father Eymard, began the negotiations in view of a foundation in Marseilles. In 1859, he purchased a house on Nau street. Father Beuf had just closed this house after a failed attempt to establish a foundation of Minimes in Marseilles. Bishop de Mazenod looked very favorably on this foundation for, on March 7, 1859, he wrote to Abbé Brunello, that “will enable me to establish as of this year solemn perpetual adoration, something that for many a year already I have wanted to see happen.” In order to help defray the expenses of making this foundation, Bishop de Mazenod invited Father Eymard to deliver a fundraising sermon in the church of the Trinity, Friday, June 3, 1859. The house was opened on November 9 and, on December 21, Bishop de Mazenod issued a pastoral letter in which he announced that, as of January 1, 1860, there would be the solemn and perpetual adoration of the Blessed Sacrament in the diocese of Marseilles.

In his diary in 1860, Bishop de Mazenod often mentioned his visits to churches where the Blessed Sacrament was exposed and in many different ways expressed the happiness he felt as a result of these visits surrounded by many adorers. For example, he wrote on January 16: At the church of St. Laurent “there was cause to break out in cries of joy upon seeing, first of all, the splendour of the way the altar was lit up, the altar upon which was placed the throne of our Lord.,” and then upon seeing the crowd of the faithful. On January 23, he wrote yet again: “Adoration at Saint-Lazare. What can I say about the beauty of this magnificent exposition and the crowds that attended the whole day long and of that zeal for adoration during the night. One could die of joy. Oh! How our Lord is glorified!” etc.