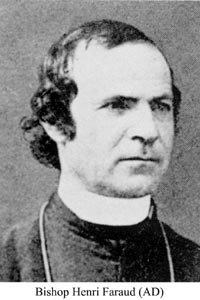 Henri Joseph Faraud was born in Gigondas, department of Vaucluse, France, on March 17, 1823. There were six children in the family. He did a year of study in the Oblate juniorate in Notre-Dame de Lumières, near the village of Gould in the Dauphiné (1842-1843) and then entered the novitiate in Notre-Dame de l’Osier in the region of Isère on September 13, 1843. He took vows in September 14, 1844 and began his theological studies in Marseilles (1844-1846).

Having received his obedience for the Canadian mission, he arrived in Saint-Boniface on November 9, 1846, while still a scholastic. He continued his theological studies and while doing so he learned the Amerindian languages. His ordination to the priesthood took place on May 8, 1847 at the hands of Bishop Provencher, titular bishop of Juliopolis and vicar apostolic of the Northwest. In the following years he ministered in Wabassimong (White Dog, Ontario) and Prairie-du-Cheval-Blanc (1847), among the Saulteux in Île-à-la-Crosse, Saskatchewan, where he learned Montagnais (1848), in the mission of La Nativité in Fort Chipewyan, Alberta, near Lake Athabaska (1849-1861), in the missions of Fort Resolution (1852) and Great Slave Lake, in Fort Vermilion on the Peace River (1858). He returned to Île-à-la-Crosse in 1861.

A decree of the Congregation de Propaganda Fide, dated May 16, 1862 and approved by the Pope on May 8, appointed him titular bishop of Anemurium and vicar apostolic of Athabaska-Mackenzie. It was not until June 1863 that he learned of his appointment. Having set out for France, he passed through Montreal on October 5, and there he collected funds for his vicariate, recovered his health. He was ordained to the episcopate on November 30, 1863, in the Saint-Martin de Tours Basilica by Archbishop Guibert assisted by Bishop Angebault, bishop of Angers and Bishop Jeancard, titular bishop of Cerame, [who had been auxiliary bishop of Bishop de Mazenod in Marseille]. He then visited Rome where Pope Pius IX gave him the privilege of choosing his auxiliary (who was to be Bishop Clut). On his return to Canada, he stopped in Montreal to supervise the printing of some works in Amerindian languages. He reached Saint-Boniface on May 24, 1865 and Fort Providence on the Mackenzie River on August 23. There he established his residence before moving to Lac-la-Biche, Alberta in 1869. He was not present at the Vatican Council but he returned to Europe in 1873 to collect more funds. He was present at the provincial council in Saint-Boniface in 1899 and, without returning to the North, he proffered his resignation on March 20, 1890. He died of a malady of the liver, in Saint-Boniface, on September 16, 1890 and was buried in the crypt of the cathedral. His remains were removed to the cathedral in Fort Smith in 1972.

He suffered terribly from rheumatism, a condition which was aggravated by his hypochondria, and it was only reluctantly that he accepted the episcopacy. He was an example of those indefatigable missionary bishops who travelled long distances during his years of ministry and in conditions that would be unthinkable today. He was the nephew of Thérèse Marie Henriette Faurie who was condemned to the guillotine in Orange in 1794 and beatified on May 10, 1925.