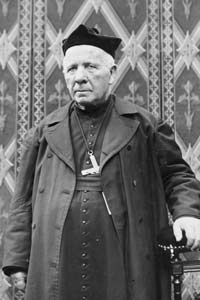 Jean Philippe Fayette was born at Mercuer in the diocese of Viviers on April 10, 1826. After his ordination to the diaconate, he entered the novitiate of Notre-Dame de l’Osier on September 20, 1849 and made his oblation on September 21, 1850. Father Santoni, the novice master, presented him for profession with these words: “This brother has very sound judgment, his talents are very sufficient, he could work successfully in mission preaching and in teaching, except for teaching theology. Good character, regular conduct.”

In saying: “his talents are very sufficient,” Father Santoni had underestimated Brother Fayette’s talents. In 1894, the superior of Notre-Dame de Bon Secours wrote of him: “Father Fayette is gifted with wonderful resources. He is an architect, a musician, a photographer, a mechanic. During one mission, he showed he has no equal in setting up a repository. Add to all these qualities that he is a very good speaker.” Father Fayette worked in many Oblate houses as a mission preacher, as a chaplain and builder.

After his ordination to the priesthood at the hands of the Founder on October 28, 1850 he was immediately sent to Notre-Dame de l’Osier as treasurer. In 1854, he received his obedience for the new Oblate house of Notre-Dame de Cléry. On July 19, 1854, the Founder presented him to Father Marchal, the superior of that house, in these words: “Now I am sending you Father Fayette. He will be a help to you, and the holy work he will undertake in the regularity of a small community of workers will benefit him more than the temporal work I had to entrust to him at l’Osier, work in which he did not do well at all and which was harmful to his progress in the perfection of his state. I hope he will now settle in perfectly, since he will no longer have to strive to nourish and look after the needs of a very large community. I recommend him to your charity, that you help him regain the fervour which declined somewhat under the worries of his temporal administration.” (Oblate Writings I, vol. 11, no. 1222, p. 213)

Father Fayette only passed through Notre-Dame de Cléry. In 1855, he was at Limoges where he only began to preach in March after a few months of illness. For some time, we find him in the community of mission preachers at Romans before the closing of this house in the summer of 1857. Then, in October of 1857, he was second assistant at Notre-Dame de la Garde and a substitute teacher at the “advanced courses” which trained the young priests for preaching.

From 1858 to 1864, he remained at Autun, preached many missions and in 1864, with a view to providing better housing for the scholastic brothers, the old monastery was entirely renovated “thanks to the keen eye of Rev. Father Tempier and the capable direction of Rev. Father Fayette.” (Missions O.M.I.., 1864, p. 276) In 1864, he was called to Paris and named director of the house of Royaumont, a sprawling abbey that they wanted to remodel to accommodate the junior seminarians, novices and scholastic brothers of France. In Paris, he divided up his ministry between ministering in the chapel of the General House, pastoral care of the youth suffering from incurable illnesses and running the residence of Royaumont.

In 1869, he was appointed pastor of the parish of Notre Dame de l’Osier. Father Audruger, the superior, wrote that Father Fayette “was received with great joy by the people whose love he had long ago won. He found the parish was prospering” with schools, organizations and works. The only thing lacking was an organization to care for the youth and the pastor set about establishing such a work. The building of the new church, begun a few years earlier, was then basically completed “with the enlightened and tireless assistance of Rev. Father Fayette who set himself to fulfill, in a manner of speaking, the lofty task of architect and contractor.”

From 1872 to 1879, Father Fayette worked in Bordeaux; then from 1880 to 1886, he was superior at Pontmain. In his report to the General Administration in 1882, he listed the activities of the priest of the house: parish missions, retreats, pilgrimages, various works. (Missions O.M.I., 1882, p. 452-475) Thanks to his “clever care,” the paddock of the property “was transformed into a genuine garden of Eden.” (Missions O.M.I., 1885, p. 468) After having preached the Lenten series of 1888 in the diocese of Limoges, he was called to Marseilles to become the chaplain of the Sisters of Saint Charles. From there, he often went to Diano Marina in Italy. In point of fact, the provincial had asked him to resurrect from its ruins the minor seminary there which had been destroyed by the earthquake of 1887.

During the course of the year 1889, he received his obedience for Notre-Dame de Bon Secours where he was still in residence in 1901. He ministered at the shrine, was chaplain of the Sisters of Saint Joseph of Vans and still preached a few parish missions. The review Missions O.M.I. which often mentioned Father Fayette’s name right up until 1901. It does not speak about him until 1905 when it announces his passing at Diano Marina on January 16, 1905 at the age of 79 years.