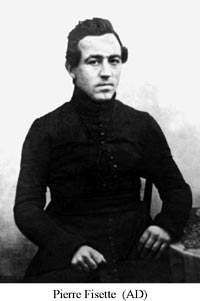 Pierre Fisette was born in Contrecœur, diocese of Montreal on August 9, 1821, son of Louis Fisette and Louise Perreault. He was a sub-deacon when he entered the novitiate at Longueuil on February 16, 1843 and made his oblation February 17, 1844. He worked among the Montagnais people, initially on the Côte-Nord of the Saint Lawrence River and then at Saguenay from 1844 to 1846. July 15, 1845, Father Honorat wrote the Founder that his Canadian confreres (Bourassa, Durocher and Fisette) were good Oblate material.

In the spring of 1846, Father Guigues let Bishop de Mazenod know that he could not allow Father Fisette to continue in the ministry that had been entrusted to him and suggested that he be sent to Marseilles. In a May 18, 1846 letter, Bishop de Mazenod wrote: “Your letter has laid me low. I can take anything except this kind of calamity. To lose oneself and lead astray others whom one had a mission to save! [….] However, I am quite disposed to welcome the penitent with paternal feelings.” (Letters to North America, 1841-1850, OblateWritings I, vol. 1, no. 64, p. 131)

Father Fisette left Montreal at the end of October to arrive at Marseilles on December 25, 1846. Bishop de Mazenod received him with kindness and lavished upon him marks of friendship, but his first impression was rather a negative one. January 8, 1847 he wrote to Father Guigues: “What else could one be but be fearful for a young man with a pretty face, most agreeable in his manners and of a vivacious gaiety quite ingratiating and communicative, who has taken care to dissimulate the least sign of his holy profession even to the point of not saying his breviary? Alas! Alas! Alas! may God have pity on us. I can but admit this kind of grief is too much for me. There is certainly reason to say, after such happenings, that one must hope against hope. [….] He of whom I speak was able to see by this consideration on my part and the kindnesses I showed him that the leprosy and all the infirmities which mar a son do not stifle the affection of a father’s heart. But what can I do with this young man? I can only employ him in one of our two seminaries if he makes himself apt for teaching and even then, how can I be confident that with so much frivolity, so little piety and such deplorable inclinations, he will be able to direct young scholastics in the ways of perfection and holiness? Believe me, it is a great embarrassment for me.” (Letters to North America, 1841-1850, Oblate Writings I, Vol. 1, No. 75, p. 149)

At the end of April 1847, Father Fisette was sent to the major seminary of Ajaccio. Father Magnan, the superior, wrote that the priests at the seminary were “very pleased with his good character,” but that Father Fisette was discouraged and claimed that he had no aptitude for teaching.” He wanted to join the Carthusians. Father Magnan added: “I genuinely believe that there is no substance here no matter which way you look at it,” and sent him back to Marseilles.

Bishop de Mazenod resigned himself to let him leave for the Carthusian monastery. In his Diary entry of August 26, he wrote: “A day of deep heartache. Father Fisette came to spend the day with me. It will perhaps be the last time that we will see each other. This wretched and dear priest has taken leave of me to go off to the Carthusian monastery. He believes this is the only means he sees available to him to ensure his salvation. I resisted this endeavour as long as I believed we could offer him in the Congregation adequate assistance for his spiritual needs. When it became evident and I was convinced that he needed other means of salvation, I acquiesced to his pressing and repeated entreaties and I wrote a letter of recommendation for Father Prior. It is impossible not to like such a charming fellow. In addition, our separation has been very painful because, for his part, Father Fisette had become terribly attached to the Congregation and to me in particular, as well as to Father Guigues and all of our priests that he got to know. I doubt that he will be able to persevere in the Carthusian monastery. That is one of the things that motivated my long-term resistance to his request, which he made to me in person and in writing, to allow him to leave. In spite of the high wind, I accompanied the dear priest right up to the approaches of Arenc on the narrow road that leads there. He will leave for Aix tomorrow, where he will meet Father Magnan to whom I have given the task of presenting him to Father Prior.”

Father Fisette only passed through the Carthusian monastery. He then joined the Trappist monastery at Aiguebelle. In order to regularize his situation in the October 6, 1847 session of the General Council, the decision was taken to dispense him from his vows.

Father Fisette persevered in the Trappists and founded the Trappist monastery of Staouéli in Algeria where he died September 3, 1878.