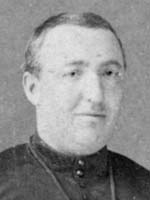 Jean-Pierre Fisse was born at Ancizan in the diocese of Tarbes on December 8, 1831. He was already a deacon when he entered the novitiate at Notre-Dame de l’Osier on November 17, 1855. It was there that he made his oblation on November 21, 1856. Father Vandenberghe, the novice master presented him to the General Council with these words: “He is bluff of character, open and very accommodating. His prayer life is solid, although it shows little zest. His intentions are upright and his dedication is sincere. His health is not all that robust and he is not able to sustain great strain. His intellectual endowment is average. I dare to hope that he will make a good Oblate.”

Bishop de Mazenod ordained him to the priesthood in Marseilles on December 20, 1856 and immediately gave him an obedience for Limoges. Father Fisse subsequently lived in several houses of the Province Nord and constantly preached parish missions and retreats until he was well on in years. In the personnel Registry of 1862-1863, there is written under his name: “Good, virtuous, average prayer life, Average physical build. External appearance a bit ordinary; talkative. Very average in talent. Little in terms of practical judgment. Fiery temperament, a bit excessive. Average as a mission preacher. He was first in the community at Limoges, then in Bordeaux where initially he took care of the works of the Holy Family. Then, he was assigned to preach missions. In 1862, he was sent to Angers.”

Father Fisse worked in Angers from 1862 to 1866; then, he lived and worked in Rennes from 1867 to 1870, at Talence from 1870 to 1873, at Angers as superior from 1873 to 1878. After this date, his name appears rarely in Missions O.M.I. and we cannot ascertain the dates of his obediences. We do, however, know that he was at Arachon in 1878 to 1883, assistant priest at Talence in 1887-1888 and part of the community at Limoges from 1894 until his death in 1903. In an 1894 report on the activities of the priests of Limoges, Father Georges Pichon, the superior, wrote: “Our veterans, Fathers Eymère and Fisse stay almost exclusively at home. These two excellent priests render us an immense service in their solitude and the accomplishment of the holy ministry. They are the keepers of the chapel and our models of fidelity to the rule and to religious exercises.” (Missions O.M.I., p. 240)

Father Alphonse Jungbluth, the superior at Limoges, wrote in 1902: “Rev. Father Fisse is still celebrating Holy Mass, but the trembling of his hands prevents him from distributing Holy Communion.” He is unable to hear confessions. (Missions O.M.I., p. 438) Father Fisse died at Limoges on May 31, 1903. It was at the time of the expulsion of religious. Nothing was written about him.